How Roger Waters Built His ‘This Is Not a Drill’ Tour 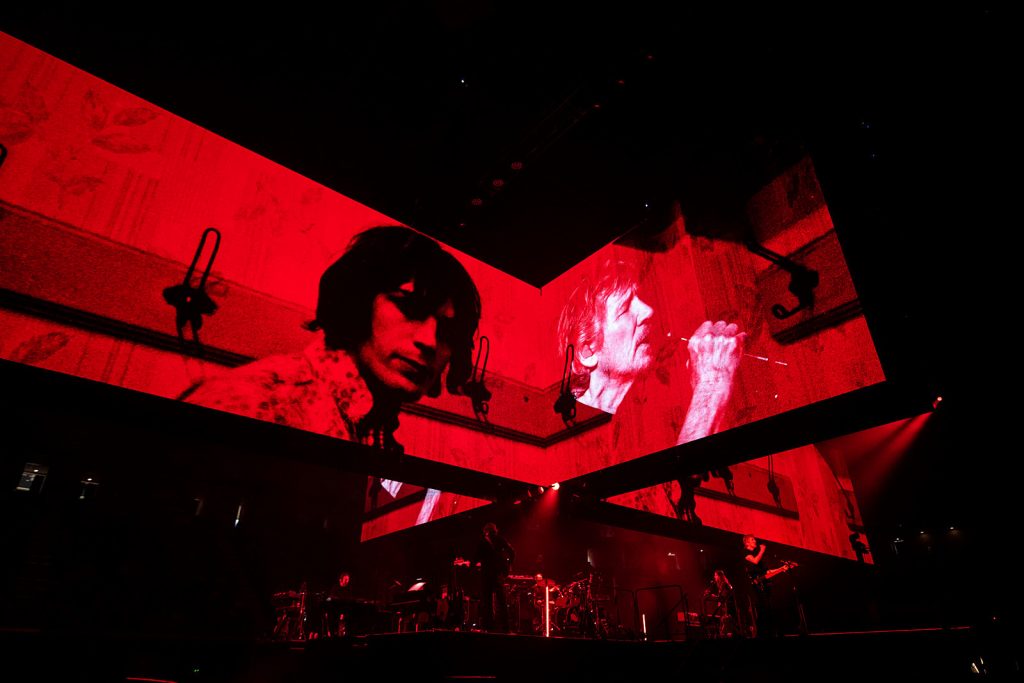 Roger Waters‘ This Is Not a Drill tour was delayed for more than two years, but when it finally launched a few weeks ago in Pittsburgh, fans discovered that it had been worth the wait.

His latest show is once again a dizzying multimedia experience, as technology has finally caught up with Waters’ ideas and the way he wants to present them. “With him, you see the power of somebody that definitely sticks with their vision since he started,” Waters’ guitarist Jonathan Wilson tells UCR. “If you think about somebody like Roger being kind of the first guy to project something and see where he’s gone from there, that dedication is just incredible.”

Wilson offered us a deeper look inside the Pink Floyd legend’s current tour.

What was the process of getting ready for this tour? Things were delayed by the pandemic.
We got brought in December before the pandemic. We went and stayed at Roger’s pad. We practiced some songs and talked about a set list. We tried some songs: This one might work; this one won’t work. We did a demo of some of the songs and stuff. At that point, he kind of had the seed. There was a script involved; there was a whole thing. He had the title and stuff. We were trying to find out what it could be like as far as the songs and stuff like that. The plan was that it would start in the summer. I saw him on March 12 or something, right before the pandemic. He was the last person I saw. It was the same thing, he was so excited about the tour, saying, “This is my idea for this and this is going to be this.” I was like, “Yeah, that’s amazing, man.” The next day, I was supposed to go down with Roger and his creative partner Sean [Evans] to see some of the visuals and stuff. That was the day when we were kind of like, “Maybe we should get the fuck out of Dodge.”

How did things change production-wise with the delay of the tour?
That’s all been done with a different team, not necessarily the band. But the way I see it, those ideas with him are constantly changing and ticking and they’re definitely evolving and stuff. He’s got a process, but he follows his gut. To come in and see where it’s at, it was like, “Holy shit.” I mean, these guys spent thousands and thousands of fucking hours.

The stage is shaped like a crucifix and everything’s in the round. The screens are intense.
It’s incredible. I mean, I don’t even know the square footage of the LED, but it’s enormous. I think they said this is the heaviest thing that’s been hung as far as the big monolith up there. I think it’s 200,000 pounds or something like that, which is incredible.

He’s not just using the screens to project the band. I appreciate the unique way he uses it to tell stories, like his friendship with Syd Barrett.
That’s one thing about this tour I’ve definitely heard from folks. They say that somehow, in the giant spectacle of the whole thing, it feels intimate. That’s a fact. I mean, you’re getting to see him there at a piano. He talks and [shares things like that]. I mean, that’s insane, that degree of intimacy is definitely a special thing.

Waters is playing “Comfortably Numb” without the classic guitar solo.
We did that at his house, the demo for that particular version at that speed, in that key. It was sung by myself and Gus, as far as the verses. We did it right before the pandemic as a demo. I can’t remember why he said to do that. That was just something he said, “Let’s try it really slow and try it down an octave,” which we did. We didn’t even think about it. He came back to us and said, “That’s the intro to the show.” It was like, “Holy shit, that’s amazing.” It’s definitely bold. It’s kind of a cool bookend because that was the last thing we did on the [previous] tour. So to start it [out that way], it’s very bold. The crowds are kind of like, “Wow, what the hell is going on?” It’s amazing.

It takes a while to get comfortable with the show when you’re just beginning a tour. What were some of the nerve-wracking moments for you personally early on?
There’s a moment in the second set, right before I’m getting ready to step up for “Money.” I have 10,000 things to change and I have to change this guitar and then my foot has to hit, boom, boom, boom. So there’s a bit of a traffic jam of things like that which I have to do. There’s kind of a policy, which is cool, the vibe is to not have a bunch of techs on the stage all of the time. But that just means that there’s [more] things [to think about]. I have to grab this and put this down and there’s marks that I have to hit. To find all of those, it wasn’t necessarily stressful, but it was a task.

Politics remain a big part of the show. Waters is still very dedicated to his activism.
For sure. Look at some of the other bands – not to compare it, but even the [Rolling] Stones or members of the Beatles, it’s more of a trip down memory lane than it is a current [show]. The activism, that’s sort of the key to the whole thing.

You mentioned how he scripted out parts of the show. And it’s not like he’s putting text on a prompter that never changes from night to night. But it illustrates how he’s looking at every aspect of the show, even the things he’s going to say.
He’s a person that you want to hear him talk. You want to see what he has to say. That’s one of the most exciting things about the show is when he starts to talk, just to say what’s on his mind. It’s such a special thing. And it’s bold because I think the first time he talks is after song three or something like that – which is kind of a bold thing to do, to stop the show, basically to talk. But like I was saying, it’s extremely intimate.

Waters and the band recorded new versions, socially distanced, of a bunch of classic Pink Floyd and solo material during the pandemic. What was that experience like?
That was fun. We would get a track from him and it would get passed around to the band. Most of us have our own studios. We would put down our tracks and send them all to Gus, who was the de facto producer. I think we started that just for fun. I believe we did “Mother” first. It was like, “This sounds fucking great.” We kept expanding it, adding songs. There’s been a bunch of stuff that’s come out of that, that’s in the show. Some of the tempos and some of the vibes. In the first set, we’re doing “The Bravery of Being Out of Range,” we’re doing that in the style of the COVID vibe.

He’s playing a new song, “The Bar,” which he’s described as being 14 minutes, the recorded version.
That song, if you hear the whole thing, it’s got 10 verses or something and they’re incredible.

That seems like it would be a pretty good anchor for a new album.
Yeah, I don’t know, but that would be fun.

What are your memories of hearing Pink Floyd for the first time?
I grew up in North Carolina and there was a station called Rock 92. One of the tunes that we’re doing on this tour, “Have a Cigar,” was one of the first things I heard [on that station]. When it shrinks down at the end to that radiophonic sound and all of the bottom end is gone from the song and it sounds super-tiny, that was something where I was like, “What the fuck was that? That’s incredible.” Hearing the stringing on of songs like on the second side of Dark Side [of the Moon], things like that, I was extremely inspired by that. Also, the found sounds: With one of my early bands, I tried to cop that, which is totally a Roger thing to have ambience from the street or something on top of a song. There was a lot of subconscious influence that was there.