How Sammy Hagar Jammed with John Bonham for ‘Space Between’ Album 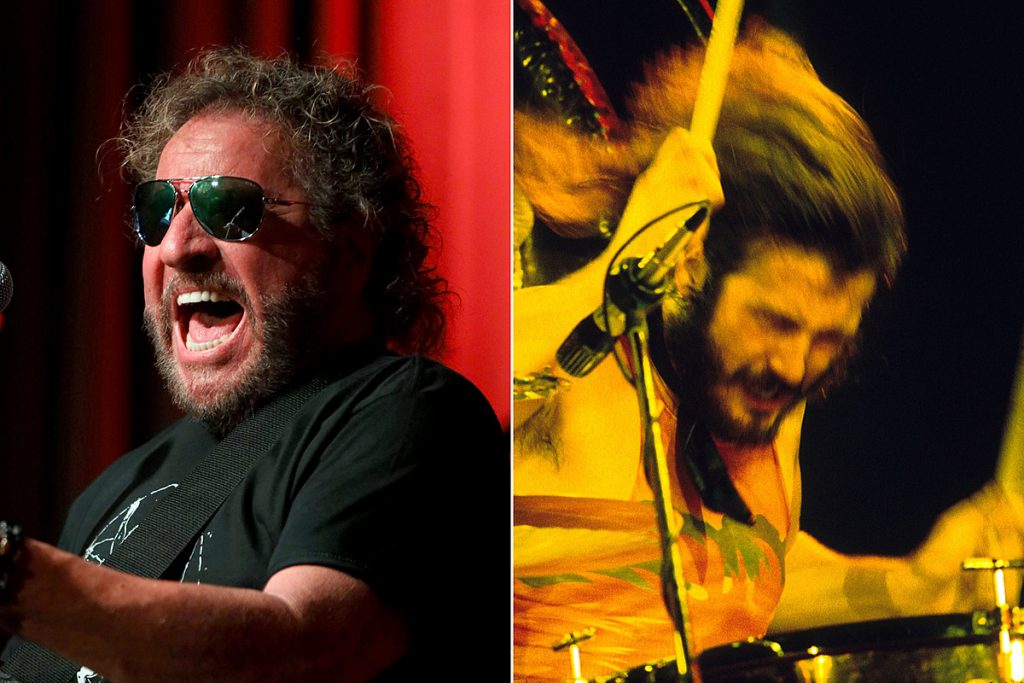 The 12-hour studio session resulted in the singer having John’s son Jason – drummer with Hagar’s band the Circle – replicate his father’s playing in an emotional experience on a remarkable date.

“I wanted to bring Jason’s influence [and] Led Zeppelin into the album,” Hagar explained during a recent discussion at the Grammy Museum in Las Vegas (via Blabbermouth). “In the Circle, we play ‘When the Levee Breaks’, and Jason has his dad’s original drum track, and we play it through the PA. It’s so heavy. … Everybody wanted that sound and that beat, so I said to Jason, ‘Give me that drum track. Let me use it in the studio,’ and I wrote a song to it.”

He continued: “I jammed with Jason’s dad for 12 hours, and I played this riff. It’s called ‘Can’t Hang.’ Then I had to speed it up a little bit because it was too slow, so we sped his dad’s track up. I finished the whole [song] without Jason.” He recalled how Jason. had become “emotional” about the track. “[H]e said, ‘Oh, mate. You’ve got to let me have a shot.’ But he was on tour with his other band, and he said, ‘I’ll do it on my day off.’ On Father’s Day, on his day off, he went to a studio in Chicago and he took the track and he put the drums on it. It’s phenomenal. He channeled his dad. Everything about it was so cool. It’s as good as it gets.”

Hagar previously suggested that Space Between could be his final album. In the discussion he outlined why that might be the case, saying: “At this stage in my life, I almost can’t believe I did it, but I got so into it that I couldn’t think of anything else. I was just completely taken over by this, and I’ve never had that happen to me in a long time. … When you’re writing songs, it’s hard, as many songs as I’ve written, coming up with some new ideas. You go, ‘I wrote one great song. Now I’ve got to write another one.’

“But when you’re thinking about what you’re writing about the same subject, it’s like watching a movie in your own head. It was so much easier. I don’t think I’ll ever write [again] unless I write a concept record. I got spoiled, because you’re so focused.”