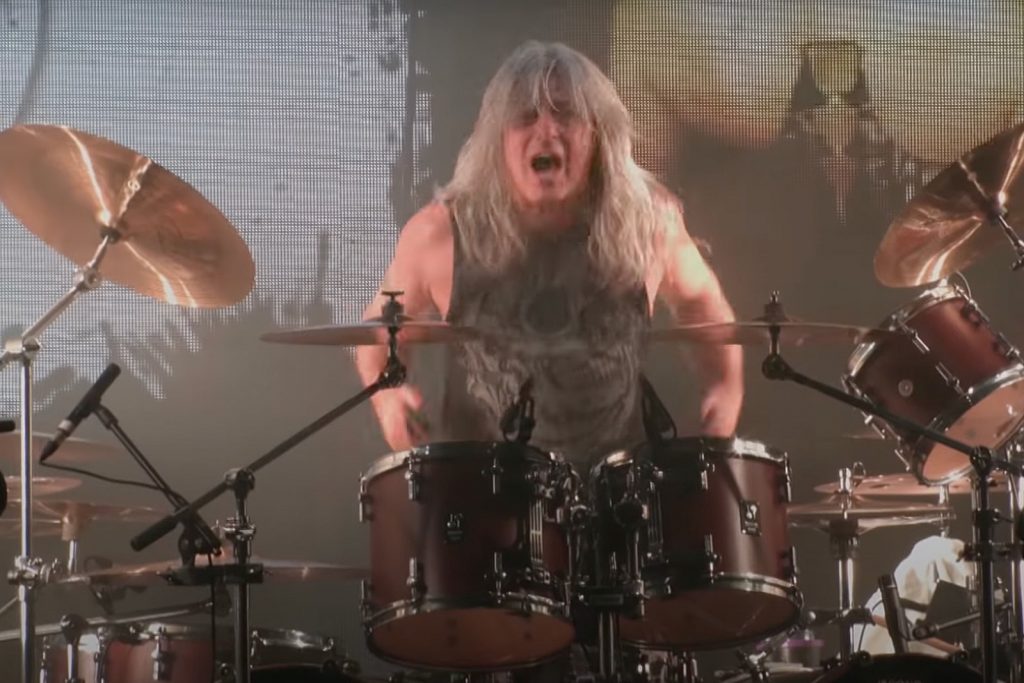 Scorpions continue to have the last laugh. The arrival of former Motorhead drummer Mikkey Dee in 2016 helped strengthen the resolve of the hard-rock veterans.

As guitarist Rudolf Schenker tells UCR, there was a time in his 20s when he’d run into people on the street who would ask him if he was still doing music. “You have to do something real,” they told him. “What do you want to do when you’re 50 or 60?”

The answer is quite clear now. “I am over 60, and the people who told me what I have to do, they are gray, sitting in a corner and enjoying their boring situation and I’m still on the road,” he laughs. “There’s some great chemistry with friends. Mikkey, who is really a great part of the Scorpions now and of course, [guitarist] Matthias [Jabs] and [Singer] Klaus [Meine] and [bassist] Pawel [Maciwoda]. We can’t live life better than what we’re doing now.”

Mikkey Dee joined the band in 2016. What does he bring to the group?
That was an idea from Matthias. Because we tried very hard to get James [Kottak] back to us. When you live in Los Angeles, it’s very easy to drift away. I think a very important part is that he always had to come from the United States, from California to Germany. When we’d start a tour and when we did promo and stuff like that. It’s not so easy flying this long distance. It’s very hard to take. He also had problems family-wise. He tried to fix everything with alcohol and then we couldn’t play anymore. The other four guys are so locked in that we could ignore the drums sometimes when he played badly. We went through the concerts, but then we said, “Look, we can’t take this for [any] longer, because it takes so much energy.” We brought him to Eric Clapton’s rehab on an island and we thought he was ready to rock again. But then he was falling back into his situation. Matthias said, “Hey, look guys, Mikkey Dee is now available.” Because Lemmy [Kilmister] died and [that’s] too bad. We love Lemmy and Motorhead because we were good friends over the years. So we said, “Yeah, why not? Let’s see.” We had a rehearsal with him and it fit perfectly. Because he is a very up-tempo kind of drummer and he plays similar to me, [several] milliseconds before the beat. It makes the new album very much a driving kind of thing. We recorded our album in the studio together, so there’s this live feeling. [Dee’s energy] helped us sound more like a young band. That’s Mikkey Dee supporting me and Pawel as a bass player; he can play everything when you ask him. He was locked in too and with Matthias and Klaus – he can sing like a bird still, which is fantastic for a career of over 50 years.

The band began the year with a residency in Las Vegas. What did you take from playing those shows?
It was our first time back in Las Vegas [after the pandemic]. It had already been booked, and we pushed it two times. We were happy because we had the possibility to start our show by really rehearsing it without moving. We were watching our lighting design guy, who did a great, great light show, which presents a band like Scorpions in a modern, new and inspiring way. We could build it up without moving, playing nine shows. The good thing about Las Vegas was many people around the world came to Las Vegas because they were hungry for rock ‘n’ roll and the shows were sold out. I don’t [normally] like to play one place, but Las Vegas is different. That’s the good thing about it because in Las Vegas, there’s gambling and I don’t gamble, but it’s fun to see all of the nationalities and then play in front of them. The promoters were happy because they didn’t expect so many people. Here we are back again and we’re happy to play again in front of our American fans.

Did you get a chance to hear Skid Row with their new singer, Erik Gronwall?
I heard him because my dressing room was very close by. Before I heard his voice, Mikkey told m that Skid Row somehow saw him on YouTube. One of the Skid Row guys said, “Hey, that would be a great singer for us.” They tried him out and he sounds fantastic.

You knew the Skid Row guys early in their careers.
From the beginning. They were managed by Doc McGhee’s brother. We had an eye on them very early. One of their songs was “18 & Life.” They were a fresh new rock band, which is great. They’re not so far from the Scorpions, but now, after the old singer left, the new one is a good replacement.

Both bands played at the Moscow Music Peace Festival back in the day.
In ‘88 we played 10 shows in Leningrad. We couldn’t believe how many people came from Siberia, from everywhere. Because we were supposed to play five shows in Moscow and five shows in Leningrad. But somehow, Afghanistan and the whole political situation, authorities in Moscow said, “No, we’ll only give the Scorpions 10 shows in Leningrad. First, we were close to saying, “OK, do we cancel it?” But then we said, “No. All of the fans would be very unhappy – let’s do it and let’s see.” It was fantastic. Our support band, Gorky Park, came onstage the first time we did soundcheck. They said, “Hey, guys, can you help us? Our manager promised us equipment and we have nothing.” We said, “Look, guys. Look at what you can find and what you’d like to use and you’re welcome.” We became friends and we noticed that this band is a great band with great people. We did those 10 shows and then one year later, Doc McGhee became our manager. He knew how big we were already in Russia and because he had something to do for the authorities in the United States, he did this Stairway to Heaven/ Highway to Hell project and [what became the Moscow Music Peace Festival]. They found a stadium and we played under the Olympic torch. It was unbelievable. I remember we played before Bon Jovi, because in those days, [they were] very much a big MTV band with a lot of great hits and songs. They played behind us, because MTV said, “Look, we’ll show the whole show in the United States, and we know they have more of a following than the Scorpions.” We said, “OK, no problem.” But the problem was that when we finished, the people [were] leaving when Bon Jovi played. [Laughs] I remember Jon [Bon Jovi] said on the interview, “Promise me something: I’ll never play after the Scorpions!” But it was great. It was rock ‘n’ roll pure. Motley Crue, Ozzy Osbourne, Scorpions, Bon Jovi, Skid Row and Cinderella were there. I remember there was an authority guy from the government who [got the crowd fired up]. Sebastian Bach came up with some very American sayings, something like, “Fuckin’ rock ‘n’  roll!” You know, completely out of the way of what people [there would expect]. The whole stadium was full and the audience was unbelievable.