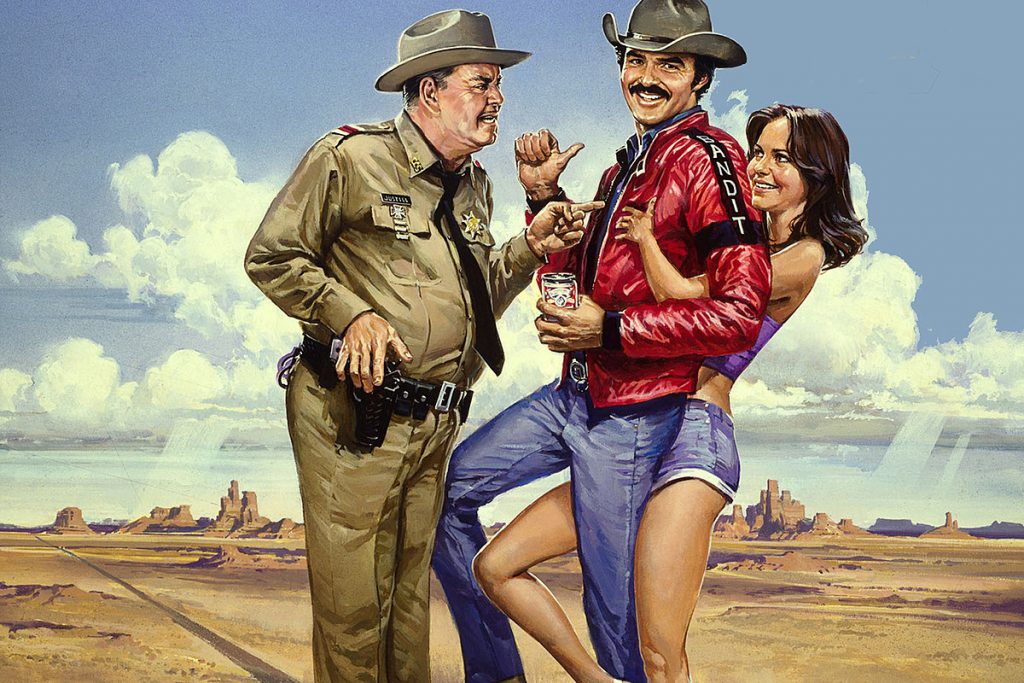 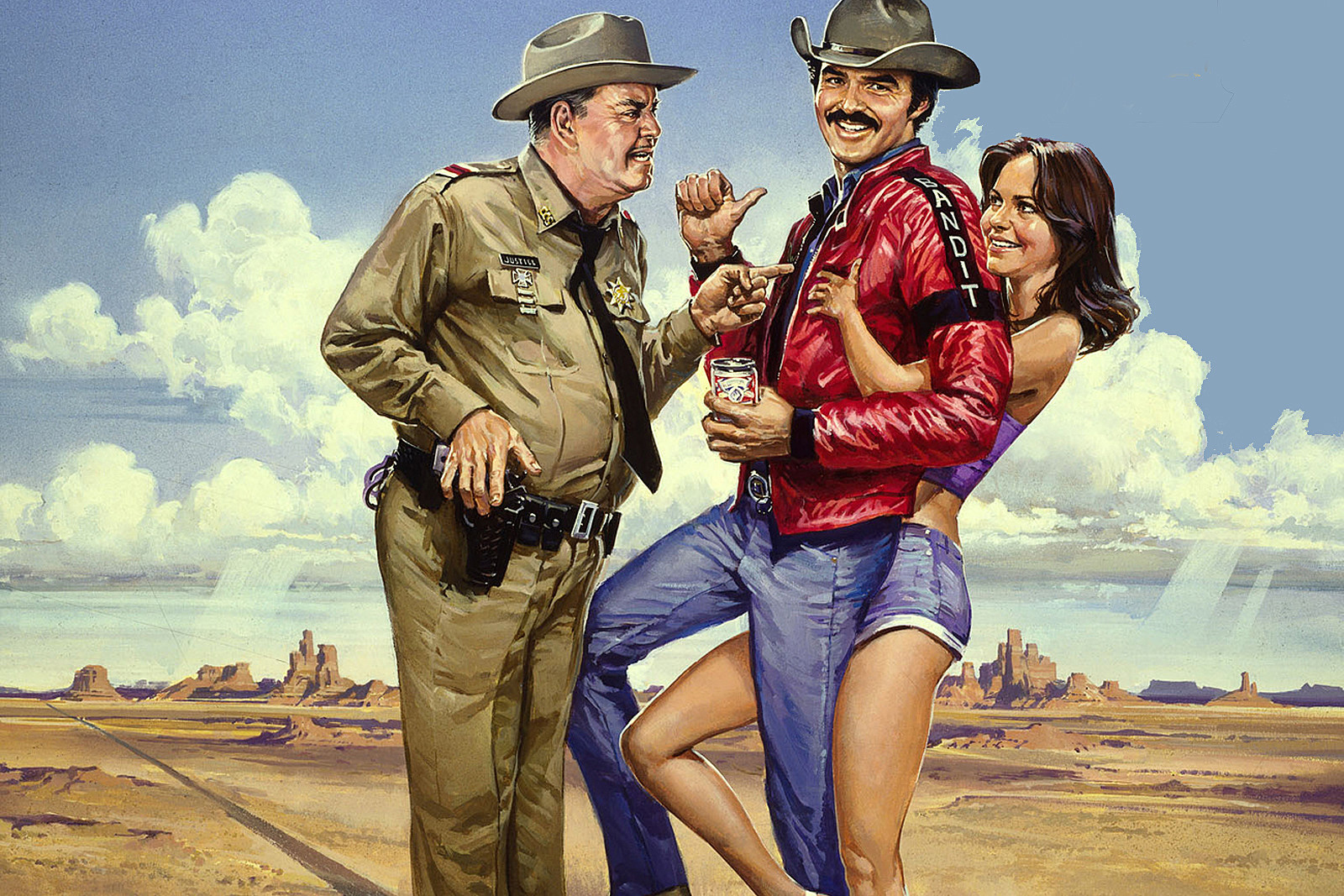 Smokey and the Bandit II will never be confused with a great movie, but it has two things going for it: Burt Reynolds‘ inexhaustible charm, and the fact that it manages to turn a run-of-the-mill script into a remarkably self-aware meditation on the decline of Reynolds’ stardom.

Released on Aug. 15, 1980, the movie continues the adventures of Bo “The Bandit” Darville, introduced in Smokey and the Bandit, which made more money in 1977 than every movie except Star Wars. The original film came to life as a plot by Hal Needham, a Hollywood stuntman who wanted to break into directing with a B-movie about bootleggers transporting a load of Coors beer for a pair of wealthy Texans.

When Needham’s friend Reynolds – then one of the highest-paid actors in the world – agreed to star, the film took on a whole new dimension. Sally Field, Jackie Gleason and character actor extraordinaire/country music star Jerry Reed — originally considered for the starring role — were recruited, and it became a surprise hit. It earned over $300 million at the box office and helped steer the road movie in a comedic direction, as opposed to the more serious fare like Duel, Two Lane Blacktop and Scarecrow that had defined the genre in the early part of the decade.

Three years after the success of Smokey and the Bandit, Universal Pictures convinced Needham to make a sequel. Reynolds somewhat reluctantly signed on, and agreed to allow a good deal of the movie to be shot on his ranch in Florida. Gleason, Field and Reed all reprised their roles from the original. Because Needham was also simultaneously shooting another Reynolds highway adventure, The Cannonball Run, they were able to add its co-star, Dom DeLuise, into the mix. The result is perhaps not as terrible as its reputation would imply, but it does signal the beginning of the end of an era.’

Watch the Smokey and the Bandit II Trailer

It opens with the millionaire from the first film, Big Enos Burdette (Pat McCormick), running for governor of Texas. In order to impress the current Republican governor, Burdette decides to give him an elephant. He hires the Bandit (Reynolds) and his sidekick truck driver Cledus “the Snowman” Snow (Reed) to fetch the animal from Miami.

Unfortunately, Bandit’s star has fallen, and he’s now a decrepit drunk. In order to get him straight, Snowman calls Bandit’s old flame Carrie (Field). She’s set to marry the son of the fabled Sheriff Buford T. Justice (Gleason), but breaks off the engagement when she hears that Bandit needs her help. After getting Bandit sobered up and back in shape, the three of them set off for Florida.

All of this is basically a reprisal of the first film, right down to the impending marriage of Carrie and Justice’s son Junior (Mike Henry). What little new spice is added comes from the fact that the elephant they pick up happens to be pregnant, and to help with this complication they sign up an Italian doctor Frederico Carlucci (“the premiere gynecologist of Pompeii,” as he introduces himself), played by DeLuise. Together, this motley crew is pursued across the South by Justice and Junior, the chase culminating in a wild smashup in which 50 or so cop cars, led by Justice’s two brothers Gaylord and Reginald (both also played by Gleason), face off against almost as many big rigs in a salt basin somewhere in what is supposed to be East Texas.

There are a few laughs here. Gleason and DeLuise are comedy royalty, and Reynolds has always been great at riding the line between heartthrob and goofball. Field adds her own measure of charm and excels at playing it straight in the midst of all the scene chewers. Needham can also be a surprisingly funny director and there are occasional gems like a slow-motion sequence when Bandit is getting back in shape in which he races on foot against three jockeys on horseback and soundly defeats them.

There are also a number of superb stunts – the film set a world record for automobile jumps with stuntman Gary Davis’ 150-foot launch – particularly during the climactic sequence. The sheer glee with which cars are demolished in spectacular and/or humorous ways, often with stunt men in close proximity to the action, is a reminder of how Needham got his start in the business, and of where his heart lies.

But the most endearing strength of Smokey and the Bandit II is its tongue-in-cheek treatment of the fact that Reynolds was almost at the end of his run as a star. One of the main through-lines is that Bandit, once famous across the South is now little more than a has-been show-off. It’s a hard pill for Bandit to swallow. “Goddamnit,” he yells at a gas station attendant who is less than impressed with him. “I’m one of the most beloved grass roots folk heroes of America!”

The film pays this off by having him realize at the end that what’s important to him is not his celebrity but the love he and Carrie share, but the underlying joke is that Reynolds himself was entering a moment in which he would increasingly seem out of place.

By 1980, younger versions of his charmingly growly persona, like Kurt Russell, were nipping at his heels, and the next cycle of action and adventure films would be dominated by stars like Mel Gibson and Bruce Willis who would substitute an ’80s aura of forthrightness for the ’70s mode of hairy-chested debauchery that Reynolds embodied. “If I keep lifting like this, I’ll look like Schwarzenegger,” Reynolds deadpans at one point as he struggles through a bench press rep of about 80 pounds. It’s to his credit that he’s not only willing to embody his own decline, but able to do so without a hint of bitterness. Like his character Bandit, Reynolds comes across here as a character equally at ease in good times and bad, winning and losing, and always ready to face whatever may come with a laugh.