How ‘Standing Hampton’ Made Sammy Hagar a Rock Heavyweight 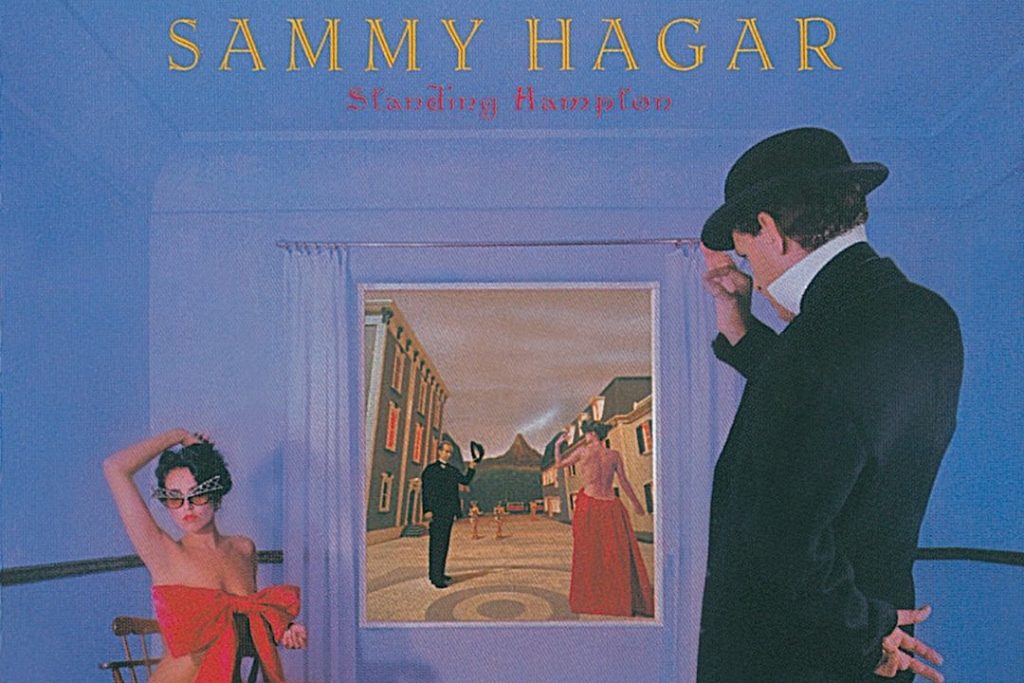 By 1982, Sammy Hagar had spent nearly a decade grinding in the music industry as the frontman for Montrose and a solo artist — so he had more than paid his dues by the time he scored his first platinum album with his sixth solo LP, Standing Hampton.

Since striking out on his own with 1976’s Nine on a Ten Scale, the Red Rocker had dutifully released a solo album nearly every year and toured relentlessly, building his fan base one tertiary market at a time in lieu of scoring radio hits. Hagar’s philosophy was simple: Throw a huge party onstage every night and invite the whole crowd.

“I was really into having a bunch of buddies out there playing music onstage, ‘cause then when you walked out onstage, the vibe was so good,” Hagar told In the Studio With Redbeard in January 2022. “That’s how I made it as a solo artist. It wasn’t through hit records. I was selling out coliseums all over America long before I ever had a platinum album, before I even had a gold album.”

By the dawn of the ’80s, Hagar was headlining packed arenas across America thanks to his tireless touring. Still, he felt he was getting inadequate support from his longtime label, Capitol Records. “I didn’t like Capitol’s lack of creativity,” the singer lamented to Sounds‘ Phil Bell in 1982. “As soon as [Bob] Seger hit big, they said, ‘Now you gotta be like Seger.’ Then, Bob Welch, ‘Now you gotta be like Bob Welch.’ I got sick of it and said, ‘Look, man, I play heavy rock.’ That’s why my records in the past were so disjointed.”

After slugging it out as a rock ‘n’ roll middleweight for nearly a decade, Hagar finally got his shot at the title when he signed with David Geffen’s newly launched Geffen Records, joining the likes of John Lennon and Elton John on the music mogul’s new roster. “I like that kind of company, so I stepped up,” Hagar told Classic Rock in 2019. “I put on some brand new shoes and said, ‘I’m here, I’m ready to do this.’ Then [A&R executive] John Kalodner said, ‘Here’s a million dollars to make this record. I’m not gonna let you out of your fucking house until you’ve given me 20 great songs.'”

Hagar over-delivered, hunkering down with his bandmates — guitarist Gary Pihl, bassist bill Church and drummer David Lauser — and writing nearly 30 songs for what would become Standing Hampton. He and the ever-exacting Kalodner whittled the final track listing to 10 songs, including a re-recorded version of “Heavy Metal,” which appeared on the soundtrack to the 1981 animated film of the same name (though it was not the theme song: That honor would go to Don Felder‘s “Heavy Metal [Takin’ a Ride]”). Standing Hampton also included the driving AOR tune “I’ll Fall in Love Again” and the white-knuckle rock anthem “There’s Only One Way to Rock,” which was born out of Hagar’s frustration with fickle, trend-chasing rock radio stations.

“I wrote that song because rock radio was going through a change at that time,” Hagar told In the Studio With Redbeard. “People say, ‘Hey, do an ad for us,’ and you say, ‘Sure what’s your handle here?’ ‘Yeah, we call ourselves “The Rock of the South” or “The Rock of the West” or “The Rock of the East,”‘ and then they’d turn around and they’d play some really schmaltzy, folk-type, acoustic pop-rock or something. I’d say, ‘Man, these guys are calling themselves “The Rock.”‘ There’s only one way to rock. If you’re gonna call yourselves ‘The Rock,’ then you should rock like this.”

Hagar’s steadfast devotion to the rock paid off with Standing Hampton. Released on Jan. 6, 1982, the LP peaked at No. 28 on the Billboard 200, by far his best showing to date, and became his first RIAA-certified album, ultimately going platinum. It also spawned two Top 40 Mainstream Rock singles, with “I’ll Fall in Love Again” peaking at No. 2 and “There’s Only One Way to Rock” reaching No. 31.

Hagar kept his hot streak going with November 1982’s Three Lock Box, which granted him his only solo Top 20 hit on the Billboard Hot 100 with “Your Love Is Driving Me Crazy.” He scored yet another platinum album and career-defining hit with 1984’s VOA and its lead single “I Can’t Drive 55.” (Lauser, however, prefers Hampton to VOA, telling UCR, “Frankly, Standing Hampton‘s a much better record. It stood the test of time. But, you know, the ’55’ and the video on MTV, that put us over the top.”) One year later, Hagar joined Van Halen and took the group to all-new commercial heights, racking up four chart-topping, multiplatinum albums in a row.

With Standing Hampton, Hagar broke through to the mainstream as a solo artist and sowed the seeds of his imminent rock superstardom in Van Halen. But decades later, he insisted his newfound fame didn’t cloud his musical judgment or make him go soft. “Most artists, fame and fortune ruins them. As soon as they start making it, they lose it. It’s a black hole,” he told Classic Rock. “But fame and fortune makes me hungrier. Not for greedy reasons, but because I want to stay on top. And staying on top calls for keeping your fucking sleeves rolled up and your hard hat on, getting in that tunnel and going to fucking work.”

And lest anybody assume that fame and fortune would force Hagar to assimilate into high society, one look at the Standing Hampton album cover — featuring a bowler-hatted gentleman gazing at a scantily clad woman — and title should have assuaged those fears. The Red Rocker gave a winking explanation of the phallic album title, derived from Cockney slang, to Sounds’ Phil Bell: “If you were in that man’s situation, you would have a standing hampton, and if you didn’t, you’d be in trouble.”