How Tedeschi Trucks Band Found Freedom During the Pandemic 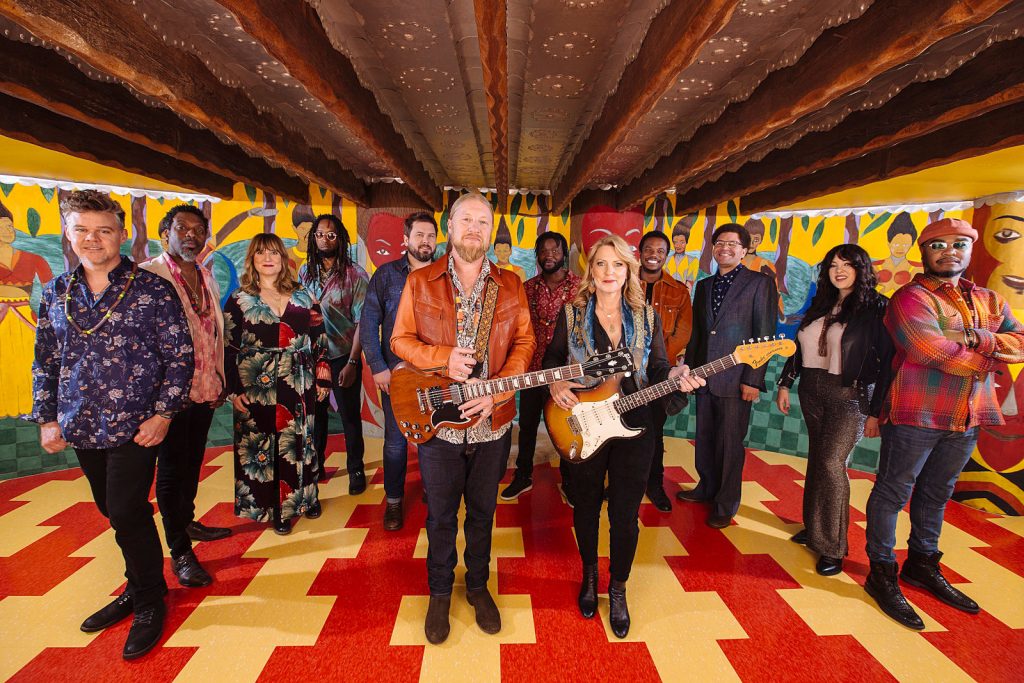 Star Wars fans will appreciate knowing that the Force played a small part in helping Derek Trucks and Susan Tedeschi figure out how to release the flood of new music they had been recording with Tedeschi Trucks Band during the pandemic.

The pair are the furthest thing from being Jedi, but they had an unexpected moment of inspiration while binging episodes of The Mandalorian: “Let’s release them as episodes, where people look forward to the next installment,” as Trucks recalls during a conversation with UCR, “because there was a [connecting] narrative to all of the material.”

Their LOCKN’ Festival update of Layla and Other Assorted Love Songs by Derek and the Dominos had already planted an important seed, though the Tedeschi Trucks Band didn’t realize it at the time.

Vocalist Mike Mattison, one of the group cornerstones with a history dating back to Trucks’ solo band days, sent an email to his bandmates in the early days of the pandemic. He had some suggested reading in the form of Layla and Majnun, the poem which had first moved Eric Clapton personally. Layla was the subject of affection, but how did she feel about it? That was the question Mattison posed, with the idea that they could imagine her emotions and write songs around that.

I Am the Moon is the expansive project which emerged, featuring 24 songs spread across four albums, each with a corresponding film to enhance the music with visuals. The first three installments are available, with the fourth and final chapter due for release in late August.

A concept project is always a delicate line to walk. What were the thoughts that were going around as this was being discussed?
Trucks: I kind of feel like it had already happened before we tried to figure out what had happened. You know, we definitely didn’t go into it thinking, “Hey, let’s make four records and let’s do this grand thing.” We went in with the seed of the idea that Mike had of taking that old poem and us all chewing on it while we were stuck at home – just thinking about it from a different perspective, thinking about Layla’s perspective. It was just kind of a healthy exercise to keep the band in same the headspace when we couldn’t be together. Once we did get together, I think there was so much pent-up energy from being stuck at home, not playing and not gigging, that there was this real joy of writing and hanging and creating. We did a lot of it. I think we got 15 or 20 tunes in and we realized, “We have something on our hands here.” [Laughs.] Then it became, “Well, how do we want to do this?” There was the traditional thought, “Well, let’s just pick 10 or 11 songs and release it, and then we have this other material for down the road.” We were like, “That just doesn’t feel right. I don’t know what it would be.” Then, there was this idea: “Well, let’s just release it all at once.” We would listen to it all together upstairs, and it was just too much for one sitting.

Tedeschi: Way too much.

Trucks: I felt like it lost its power when it was all at once. I just don’t think anyone has that kind of attention span anymore. It felt like a waste to do it that way. And then, we had been doing the weekly Fireside Sessions where every Thursday, there would either be a live concert of the band from years past, or we would record one in the studio. It kind of became this gathering place during the lockdown for our fans to meet up. We had the idea that Sue was kicking around.

Tedeschi: We were watching a lot of The Mandalorian.

Trucks: It’s like, we should do weekly shows for our fans. Let’s release them as episodes, where people look forward to the next installment – because there’s a [connecting] narrative to all of the material. There was a natural throughline because we were all kind of delving back to the same source material, even when we were separated. When we started sequencing the record, there was just this real beautiful narrative. With Crescent, the first record, you can feel all of the characters being introduced. Sue and [keyboardist] Gabe [Dixon] singing on the first tune [“Hear My Dear”], and then Mike [on “Fall In”] and the horn section. It’s like the Muppets are the cartoon characters in the background. You kept feeling the story unfolding. That’s kind of when the lightbulb went off about doing four parts. [We were] thinking about how badass the back cover of [John Coltrane’s] A Love Supreme looks when you see it broken up into pieces like that. Those were all things that were kind of kicking around in our head. Mike wanted to make sure from the beginning, especially when he talked about doing images with it and the film – we were thinking about animating it – that we didn’t try to make a rock opera. We weren’t trying to stick to a story directly. But it was inspired by it, and it was a through line. It very much mirrored what was kind of going on in the world. Everyone’s kind of isolated and we all knew people that were kind of spinning out. You were just kind of checking in on people, like, are you okay? [Laughs.] There was a lot of longing for things you couldn’t have or things you couldn’t do. It was a weird parallel between the life the whole world was leading in the first half of 2020 and the isolation in the story.

Watch the Film for ‘Episode I: Crescent’

Some bands and artists struggled to be creative during the pandemic.

Trucks: We were lucky. We had our studio in our home, with enough extra bedrooms and couches that once we could get tested and families were good with letting their significant others leave the nest, everyone came and lived with us. Everyone was kicking around ideas separately in the beginning, but once we got together, it kind of felt like the early days of being in a band when you’re living together and there’s no going out to eat, so you’re cooking together and you’re just kind of in it together. We did that at our house and up in our farm in Georgia. It was a lot of face time with everybody, just reconnecting.

Tedeschi: The core of us, definitely. We couldn’t have the whole band together, because some of our horn players live far away, like Texas and California.

Trucks: It was all of the people that were driving distance.

Tedeschi: Whoever was in driving distance, we could do stuff with, including the Fireside Sessions that we did during the lockdown. So it wasn’t like we were just making the actual four records, we actually made a bunch of live performances as well. We had a lot of things going on. It was not a time off. [Laughs.]

Trucks: But you know, it was good to be busy. It ended up being 18 months without a paid gig, so we needed to do something to keep our heads from spinning out, like, “What are we going to do?” – because it’s a big band and organization. Trying to hold it together, if we didn’t have something to work on, we probably would have really spun out. You can only do so much yard work. It was like, “We need to be busy!” It was pretty incredible though, I’ve got to say. I think it saved the band in a lot of ways. After losing [late flute-player] Kofi [Burbridge] and going through the last handful of years that we went through leading up to this, I think we needed a reset.

Trucks: Yeah, so we were kind of reeling from those losses and trying to reevaluate what we wanted to do. We’d been on the road nonstop for 30 years, all of us. This forced stop, I think it was kind of necessary. It made us realize how much we enjoy making records and writing music together.

Tedeschi: And not touring. [Laughs.]

Trucks: There really is something, when you’re in the studio writing and there’s no gigs on the horizon, it’s a totally different feeling than being in the studio writing when in eight days, you have to be up in New York for an eight-night run at the Beacon and you’ve got to play 120 songs. It’s hard to not have that breathing down your neck, thinking about, “Alright, this is cool, the creativity part, but we need to pivot and get to work!” I didn’t realize how nice it was to have that freedom of thought and space that we had during this time.

Their long, complicated history isn’t always an easy one to navigate.