How the Doobie Brothers Met the Rolling Stones 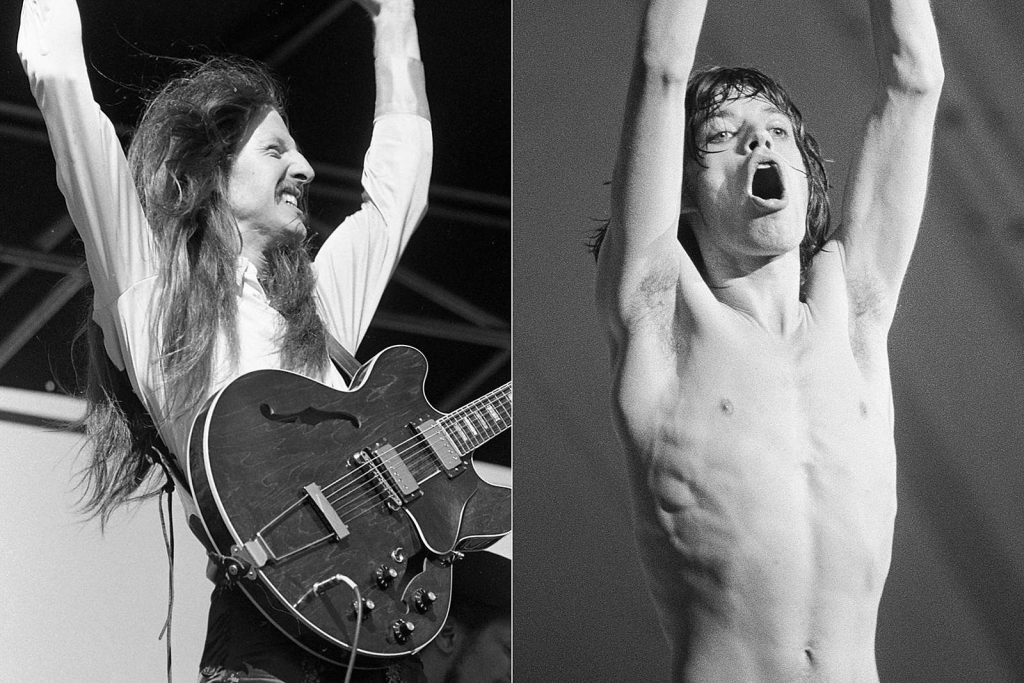 With a name like the Doobie Brothers, it makes sense that other bands would be interested in more than just their music.

But what they were doing in the studio, as well as the company the Doobies were keeping with the likes of Little Feat, actually attracted rock ‘n’ roll luminaries like Mick Jagger and Keith Richards.

The Doobie Brothers are back on the road this summer in celebration of their 50th anniversary, once again with Michael McDonald on board.

As fans get set to attend the concerts, they can enjoy some reading material. Founding members Tom Johnston and Patrick Simmons have collected the stories that have accumulated across their lengthy careers and put them into a new memoir, which is available now. We spoke with Simmons about the book, Long Train Runnin’: Our Story of the Doobie Brothers, as the band was getting ready to return to the stage. In the first part of our conversation, he shares memories about meeting Jagger and Richards, the effects of their band name, and the kinship that he felt with Nirvana‘s Kurt Cobain.

There are a lot of fun stories in this book. It was great to read about the Warner Bros. Music Tour in 1975 with Little Feat, Montrose and others. You had people coming out to see the shows like Mick Jagger and Keith Richards, Elton John.
Yeah, in a sense, it was a once-in-a-lifetime thing to have all of those bands together [and they realized that]. Since then, all of those bands kind of went on to do bigger and better things. People like [Little Feat’s] Lowell George, they were kind of setting the bar for the blues and slide guitar and second-line kind of rhythms and stuff. Little Feat was one of my favorite bands. I just thought Lowell was an amazing singer and player. Billy Payne [is] one of the greatest keyboard players ever. Richie Hayward, the drummer, was arguably one of the great drummers. [David] Garibaldi of Tower of Power – again, one of the greatest drummers. Those two guys, in my opinion, are two of the great drummers of all time, sort of unsung heroes in a certain respect – but among people that are in the know, they recognize that those guys were some of the greatest polyrhythmic multi-dexterous players ever in the history of popular music. If you listen to those guys on record or talk to people that know, they will tell you that those guys are some of the greatest drummers of all time.

What did it mean to you to meet Mick and Keith?
It was pretty awesome, and I’m starstruck. [Laughs] But they were very nice guys. I think Keith was having issues with substance abuse back then and stuff so in some ways, I think he was a little bit more introverted. I look back on it now and recognize that probably some of that was influenced by his drinking and getting loaded at the time, but he was very nice. Mick Jagger, being much more outgoing and talkative, he was a little more centered if you will. [Laughs.] But they were nice people and very nice to us. To be honest with you, I think they were there to see Little Feat more than anything. That band was one of the more interesting and eclectic New Orleans-style blues-based bands of the time. The Stones were very into that and the more ethnic forms of music. I think they knew that they were playing on the bill with us, but they came in and hung out with us, so I think they probably knew of our music, or a little bit of it at the time – and again, we are kind of a blues-based band [also], so they got that right away, of course.

A band name like the Doobie Brothers, I would think at the very least, they knew they were going to have fun hanging out with you.
Yeah, right. [Laughs.] Everybody was always looking for the weed. “You holdin’?” You know, we ended up playing with the Stones later on too, so we kind of continued a little bit of our acquaintanceship through the years. We did a couple of shows with them here and there – opening gigs, of course, but they were always nice. It’s like you’re standing there and they walk over to you. You didn’t have to put the rush on them. They would see you standing there, “Oh, hey, it’s nice to see you again.” It was a nice, normal kind of interaction. It was funny, because we played with so many bands through the years. Some people, they develop an attitude. It’s like they’re sitting on a separate plain from the rest of us. [The Stones] really weren’t that way. I remember playing a gig with them in New Orleans or something. They were coming out on stage and they stopped, came over, Mick shook my hand and Ron Wood and Keith Richards, they were all just very nice guys.

You write in the book about being born in Aberdeen and hearing Nirvana’s music later. How interested were you in hearing what they were doing?
I heard “Smells Like Teen Spirit” and hearing Kurt Cobain’s voice, he was obviously a really talented singer and it was kind of a rudimentary musical thing, but it was well-produced. I think the simplistic things that were going on there, the sound was individualized. They had a sound and he had a way of playing that worked for the song. [Nirvana’s songs] were catchy and, of course, the lyrics are impossible to understand when you’re listening to them – as are most songs by most artists. You’ve got to hear ‘em a few times to really know what’s going on, but it was compelling in terms of the musicality of it and the catchiness of the melodies and so on. I think he had a really great voice; I think that’s probably what really captured most of the audience right off the bat. That’s usually the way it is, somebody has a cool and interesting voice and that’s what attracts people in the first place.

It’s always interesting when you hear things like that reflected by the music.
You know, I think the Northwest has not a sound, but a movement of music that I think probably there’s a relationship to the artists and the music and the way that they project it and perform it that’s a little bit more – alternative is a word [that’s been used]. I don’t think you can really put your finger on music coming out of that scene, exactly, but there’s a relationship to the music, the musicians and the sound. I’ve got to think some of that is influenced by their environment. You know, the very cloudy, foggy [conditions], rainy winters – there’s a certain solemnity or something that maybe goes along with that. That probably influences some of the themes in the music. Then, you know, whatever lifestyle and experience that stems from, but the Northwest is kind of a blue-collar [area] or at least it was. It’s changed tremendously, with tech and so on, but probably in Kurt Cobain’s day and my time, it was more of loggers and construction and paper mills and that kind of stuff. It’s more of a blue-collar working-class feel for the lifestyle, and I suspect that kind of comes through in the music to a certain degree. It’s not a total intellectual [thing]. There’s a little backlash too, I think, to the more right-wing, straight religious thing that goes along with living in those small towns and areas. Certainly, for Kurt Cobain and probably myself, there’s a rebelliousness that goes against the grain. Some of that, I think, is influenced by the environment.