How the World Reacted to Eddie Van Halen’s Death 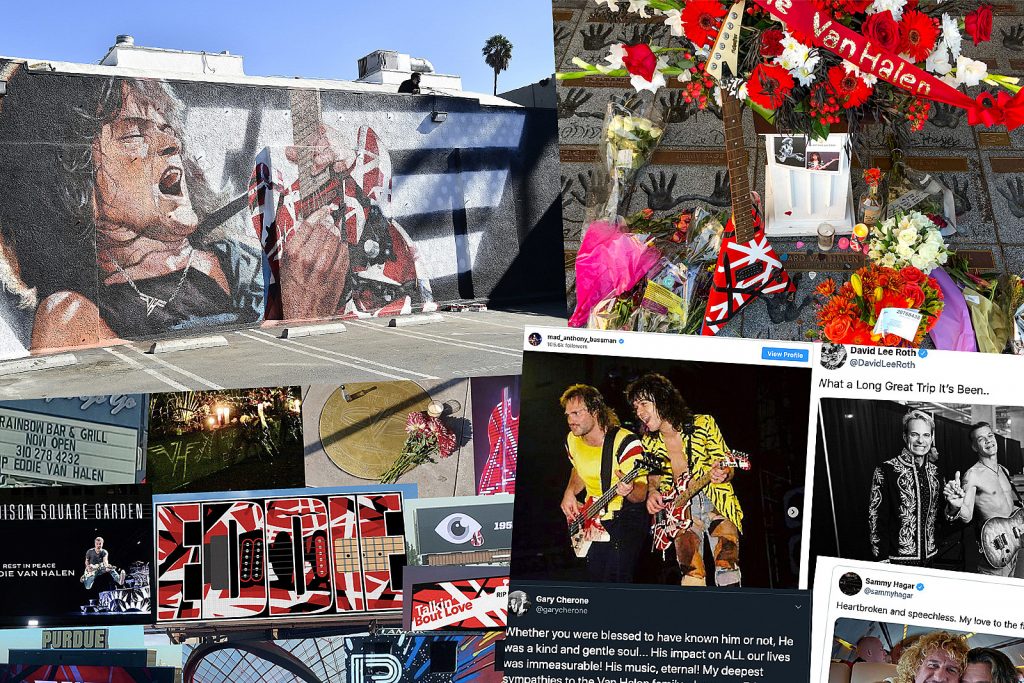 The rock world suffered a devastating blow when Eddie Van Halen succumbed to cancer and died on Oct. 6, 2020, at the age of 65.

The burden of breaking the news fell to his son, Wolfgang. “I can’t believe I’m having to write this, but my father, Edward Lodewijk Van Halen, has lost his long and arduous battle with cancer this morning,” he wrote on Twitter. “He was the best father I could ever ask for. Every moment I’ve shared with him on and offstage was a gift. My heart is broken, and I don’t think I’ll ever fully recover from this loss. I love you so much, Pop.”

Wolfgang didn’t want to share the news publicly in those final moments, but he didn’t want the media to beat him to it. Band manager Irving Azoff had called Wolfgang to let him know that TMZ was about to reveal the news of Eddie’s death using information they’d obtained through a leak at the hospital. Wolfgang was determined to not let the gossip site break the story.

“I’m in the [hospital] room,” Wolfgang recalled in a June 2021 Spin interview. “And I’m literally sobbing, and I have to go through my phone to find a picture of him. I landed on my favorite picture of him where we were just sitting there, laughing. Hitting ‘post’ [on Instagram] was one of the most painful things. It made it real.”

Tributes to the late guitar virtuoso from fans and fellow musicians quickly flooded the internet. Everybody had a story about the first time they heard “Eruption,” the dizzying display of two-handed tapping that revolutionized rock guitar when it appeared on Van Halen‘s eponymous 1978 debut album. Aerosmith‘s Joe Perry said Eddie Van Halen “reinvented guitar playing,” and Steve Vai called his contributions to the medium “immeasurable.” Def Leppard‘s Phil Collen called Van Halen a “pioneer” who, along with Jimi Hendrix, defined “electric guitar as we know it today.”

Van Halen’s bandmates had more muted reactions as they processed the tragic loss. “Heartbroken and speechless. My love to the family,” tweeted Sammy Hagar, who fronted the band from 1985-96 and whose tenure included four consecutive chart-topping albums. Former bassist Michael Anthony — whom a teenage Wolfgang replaced in 2006 — echoed Hagar’s sentiments almost verbatim, posting three photos of himself playing alongside Eddie with the caption, “No words. … Heartbroken. My love to the family.”

Drummer Alex Van Halen is not active on social media, though he delivered a statement to the Van Halen News Desk in the days following his brother’s death: “Hey, Ed. Love you. See you on the other side. Your brother, Al.” On May 8, 2021, he commemorated his 68th birthday with another tribute on the same site: “First birthday without you, Ed. The view from my drum set will never be the same. VH forever! #vanhalenforever.”

Gary Cherone, who sang with Van Halen from 1996-99 and appeared on the poorly received Van Halen III, delivered the longest tribute to his former bandmate. “Whether you were blessed to have known him or not, he was a kind and gentle soul,” Cherone tweeted. “His impact on all our lives was immeasurable! His music, eternal! My deepest sympathies to the Van Halen family. … Love you, Ed #LongLiveTheKing!”

Perhaps the most heartbreaking response, however, came from David Lee Roth — Van Halen’s original front man and lifelong foil to Eddie, with whom he had a famously contentious relationship until the very end. Roth tweeted a photo of himself and Eddie backstage, both cheesing for the camera and grasping hands, with the simple caption, “What a long great trip it’s been.”

Van Halen’s native language was guitar, and his single-minded devotion to his craft (plus his escalating alcoholism in later years before getting sober) often made him difficult to work with and stoked animosity between him and his ex-bandmates. Hagar said he reached out to Van Halen “four or five months” before his death and was relieved to find him in a better headspace.

“He had come to peace with everything. He knew he was sick, and it was so great to contact the guy when he was in that state of mind,” Hagar told The Washington Post. “He said, ‘Hey, let’s make some noise.’ He goes, ‘I got a lot of work to do on myself this year. You ain’t gonna believe it, I’ve been fighting this stuff for 15 years, and now I got this big thing on my neck and my throat right now, and I gotta get it all straightened out. And next year, you and I gotta make some noise. We made some great music together, and I want to do it again.'”

Anthony, on the other hand, said he never got the chance to make amends with Van Halen. On an episode of the Talkin’ Rock With Meltdown podcast, the bassist said he and Eddie “actually hadn’t spoken [for many years], and unfortunately, we didn’t get a chance to. And, you know, it kind of bothers me, because we had some issues that were never resolved. But, I mean, what can you do? We were on track [for] a reunion, which I’m really sad that it never happened. But, you know, life and the show goes on.”

Anthony had reportedly received an invitation in 2018 to rejoin Van Halen for a summer 2019 tour. The reunion plans later transformed into the “Kitchen Sink” tour, which would have included Roth, Hagar and Cherone and Anthony, with Wolfgang’s band, Mammoth WVH, opening the shows.

Wolfgang told Howard Stern he had first pitched the idea to his dad in 2015. “I would be like, ‘Hey, Dad, you know what would be cool … is if I opened for you guys, and we had Mike come back.'” Eddie was initially hesitant, but Wolfgang “got him excited about it. And at a certain point it turned into what we joked as the Kitchen Sink tour. ‘Cause after he was okay with that arrangement, it was like, ‘Fuck, let’s get Dave and Hagar and even Cherone, and let’s just do a giant fucking awesome thing.'”

The highlight of the Kitchen Sink tour for Wolfgang would have been inviting Eddie onstage to jam during Mammoth WVH’s set. Unfortunately, the guitarist’s health began to decline before the band could announce any of its plans, starting with the discovery of a brain tumor following a motorcycle accident in early 2019. He had been previously diagnosed with stage 4 lung cancer in 2017, which had also begun to worsen. Eddie spent much of his final years flying back and forth to Germany for treatments, and the coronavirus pandemic further complicated matters.

“I will forever loathe COVID and how it was handled,” Wolfgang told The Washington Post, “because they stole that moment from me.”

In lieu of an all-encompassing reunion tour, the members of Van Halen have continued to pursue their various other projects. Hagar and Anthony formed Sammy Hagar and the Circle in 2014 along with drummer Jason Bonham and guitarist Vic Johnson, and they released their debut studio album, Space Between, in May 2019. Roth released a series of singles throughout 2020 and 2021, opened for Kiss on part of their farewell tour and plotted two separate Las Vegas residencies — but in October 2021, he announced his plan to retire in January 2022 after completing the second Vegas residency. “I’ve given you all I’ve got to give,” he said. “It’s been an amazing, great run, no regrets, nothing to say about anybody.”

Wolfgang Van Halen, meanwhile, released Mammoth WVH’s eponymous debut album in June 2021 and continues to honor Eddie onstage every night with the LP’s lead single, “Distance.” Wolfgang revealed that although he initially planned to release “Distance” at a later date, he decided to release it as his debut single as his father’s health worsened. “While this song is incredibly personal, I think anyone can relate to the idea of having a profound loss in their own life,” he said.

The Mammoth WVH bandleader has also repeatedly refused to cover his father’s songs in concert and flatly denied rumors of a Van Halen “reunion” tour featuring Wolfgang in Eddie’s place. Instead, he insisted the best way to honor his father was by forging his own path with his music.

It’s been more than 40 years since he revolutionized the way rock guitar is played with the release of his band’s self-titled debut album.