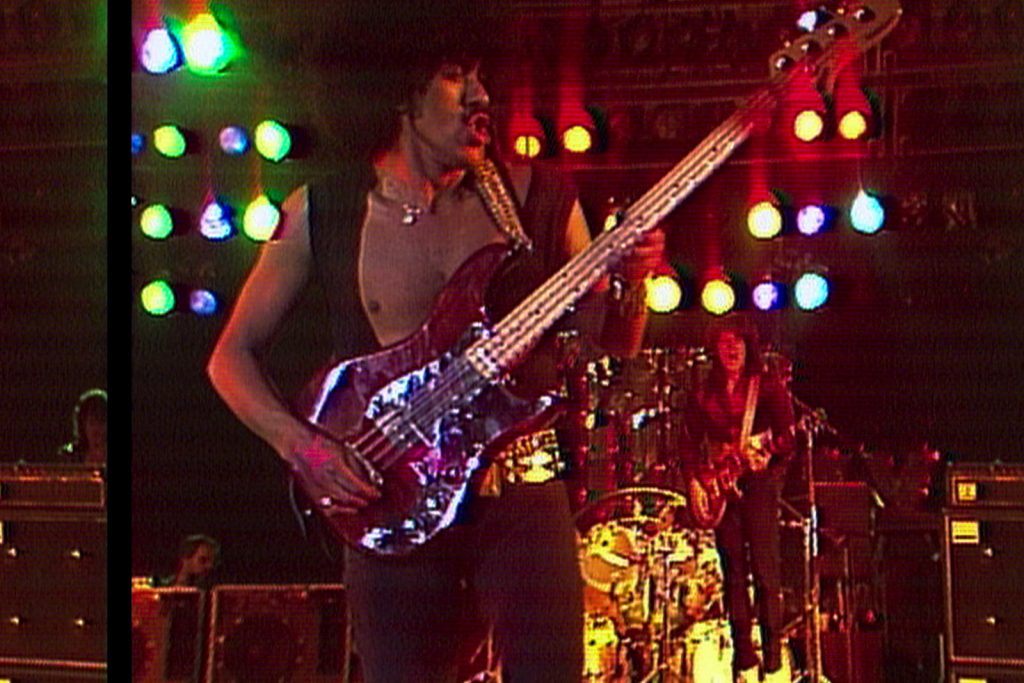 Thin Lizzy‘s Phil Lynott grew up as one of the few people of color in Ireland, while facing other adversity. He could have come away with a chip on his shoulder, but instead used the challenges to emerge even stronger.

Numerous rock ‘n’ roll luminaries and associates pay tribute to Lynott’s legacy in the documentary Songs For While I’m Away. Metallica’s James Hetfield and U2 bassist Adam Clayton are among those who share personal attachments and insights.

Songs For While I’m Away arrives on June 24, and it’s paired with a fully restored and newly remixed Thin Lizzy live performance from 1978 at the Sydney Opera House. The concert film was first released in the ’80s on VHS and Laserdisc, and has now been expanded to include additional songs. It was an important gig that had a predicted audience of 6,000 people. The band took the stage instead to an estimated crowd of 70,000.

Guitarist Scott Gorham spoke with UCR about Lynott, his memories of touring in that era, and some additional stories regarding AC/DC, Metallica and Bob Seger.

Songs For While I’m Away shines an important light on both Phil Lynott and the legacy of Thin Lizzy. What did it bring out for you personally?
Phil and I hung out together nearly every day, all over the world, for 11 years. I mean, every day. We literally talked about everything. Nobody kept any secrets from each other. I mean, why would you? Especially on those long flights or long drives, you’d just start talking – but what I really liked about it was the pictures of Phil growing up in school. It really highlights the fact that he really was the only Black guy in the whole of Ireland. He grew up without a father. Basically, he grew up without a mother too. Back in the ‘50s, if you had a baby out of wedlock, that was the sin of sins. One of two things is going to happen, you’re going to grow up with a horrible chip on your shoulder and you’re going to turn out to be a complete asshole, or you’re going to turn it around and use that to your advantage and turn into one of the good guys. That’s what Phil did. He used it to his advantage and he turned into one of the good guys. You’ve got to give him kudos for that, man.

You mention seeing that lack of diversity on the road. How much was that an issue with touring in general?
Touring, never, but with radio stations, that did happen. They’d look at the album cover and see okay, white guy, Black guy, white guy – Black guy, is this an R&B band? This can’t be a rock band. I see the guitars there, but there’s a Black guy in the band. Where do we slot this band in musically? I think that’s why it was important for us to come to places like Cleveland, L.A., New York and all over America – to say, like, “Yeah, this is where you slot us in. We’re a rock band and that’s all there is to it.” Those American tours on that front alone, it was important.

It’s well known that Phil loved Jimi Hendrix, but a song like “Warriors” highlights the influence of what he added to the band’s sound.
I mean, you can kind of watch Phil, even the way he stands sometimes, it’s very Hendrix-like. I think that was so ingrained in him. It wasn’t even really a copy thing any longer; tt was a Phil thing, now. You’ve got to admit, he always had that coolness on stage. He always felt like, “Yeah, I’ve got everything under control. Nothing’s a problem for me. We’re all going to have fun. I’m going to make this 10,000 seater, I’m going to shrink it down to 500 people, right?” That’s how intimate we’re all going to get. He did that night after night.

Listen to ‘Warriors’ by Thin Lizzy

Thin Lizzy played shows with AC/DC back in the day. What’s your lasting memory of that experience?
You notice how good these guys were, right? The singer, Bon Scott, was probably the friendliest guy in the band. I think they supported us twice in America. The two brothers [Angus and Malcolm Young] didn’t want to know about us at all. They thought they should be headlining, dammit! You know, that kind of attitude. But Bon was in our dressing room for hours, drinking all of the booze and telling stories and having a great time – just being one of the guys. We all really warmed to Bon quite quickly, and quite a lot. But AC/DC came up with so many great songs that they deserve to be right where they are. They took the world by the balls and shook it up. So good for them.

It’s not hard to imagine that Bon and Phil would get along.
Oh, they did. [Laughs.] We all went out to a club on both of the nights and I never saw Angus or his brother. But it was the three of us, maybe four, going out to the clubs and having a right old time.

How did you guys end up hearing Bob Seger’s music? The band’s version of “Rosalie” has become a Thin Lizzy staple.
We did a tour with Seger early on. We were working on the Fighting album. We didn’t have a hit off of the Nightlife album, which was the first [with the new lineup]. The record company was a little nervous. They want a hit single, you know? They came to us with the idea, “Well, why don’t you do a cover song?” Phil hated [that idea] straight off the bat. He knew he had it in him to write a hit single – and several of them – but it just hadn’t happened at this moment in time. Just to appease them, he gets us all together and says, “Hey, check this song out. I was thinking this could be the song that we could use as a cover.”

He had a Seger album, Back In ‘72. He played “Rosalie” and I’m looking at the record player and I’m looking up at Phil. I’m thinking, “Really, man? I don’t hear it.” [Laughs.] I don’t know what you’re hearing, because it’s acoustic and quite slow. He’s going, “No, no, I know exactly what we’ll do with it. We’ll just really crank up the tempo and we can get some other guitars going on over on this side and put a little harmony in there. We’ll get [Brian] Downey humping on the drums. We can do this.” We thought, “Well, why not? Let’s give it a shot.” After we got done with it, I thought, “Yeah, this is actually pretty cool.” Where it really shines is on the album Live and Dangerous. It’s the live “Rosalie” that really shows how we made that song our own.

James Hetfield is in this film sharing his love for Phil and Thin Lizzy. When did you first find out that Metallica liked the band?
I think when I heard their version of “Whiskey in the Jar.” I couldn’t believe it. They do a kick-ass version of “Whiskey in the Jar.” So much so – and don’t tell James this, but I kind of use their version when I play that live. It’s got a lot more driving feel with the rhythm guitar. I thought they cut that perfectly. It’s exactly what that song needed, was more drive to it – you know, less acoustic guitars and more thump on the electric rhythm. So hell yeah, I stole that from James right off the bat when I heard that. I’m not embarrassed about that at all. Thank you James, Lars [Ulrich] and everybody else.

Watch the Metallica’s ‘Whiskey in the Jar’ Video

When did you eventually meet the guys?
Here’s the funny thing. I gave an award to Metallica at one of the big award shows. It was Lars that came up to receive the award. He gave such a nice thank you to me and Thin Lizzy and spoke about how they’ve been big fans and all of that. At the party after that, I met Jason Newsted and Kirk Hammett. So I met three of the guys, but James wasn’t there. A few years later, I had a birthday and all of these people did videos for me. It was like an hour and a half of all of these people like Metallica and [bands like that] giving me the birthday wish and there’s James. He’s going, “Oh man, I’ve been such a big fan. I want to wish you a happy birthday. Happy birthday, I love you man. Have a great day.” I thought, “Wow, of all of the guys in Metallica, I met all of them except James and he’s the one that sent me the birthday wish!” So when I meet him finally, I’m going to thank him for that. That was very cool.

Phil Lynott carved out a lofty reputation as not only one of his generation’s greatest natural rock stars, but as a songwriter’s songwriter.