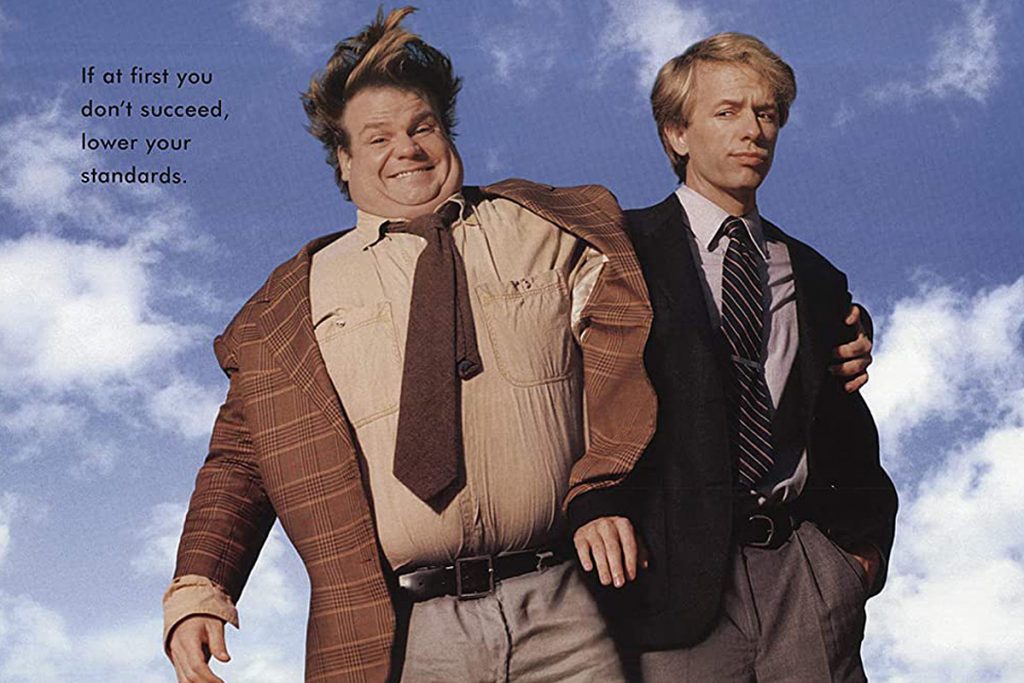 There are a number of lovable things about Tommy Boy, but the one that stands out most is the way it showcases Chris Farley’s deranged, madcap and endearing comedic talents.

The movie – which premiered on March 31, 1995 – is one of the most memorable comedies from the ’90s featuring Saturday Night Live cast members and alumni, and produced by SNL creator Lorne Michaels. It tells the story of Tommy Callahan (Farley), who – after an arduous seven years of rugby, beer and bong hits – has just scored a D+ in his final class and barely managed to graduate from college.

He returns home to Sandusky, Ohio, to take his place in the family auto-parts business run by his father, Big Tom (Brian Dennehy). Big Tom has recently become engaged to the gorgeous Beverly (Bo Derek), so, in addition to his new job, Tommy has a new family, including a new brother – Beverly’s son Paul (Rob Lowe).

On top of all this, Tommy is tormented by his grade-school nemesis, Richard (David Spade), who also works for Big Tom; he also manages to start falling in love with a local girl named Michelle (Julie Warner). But everything changes when Big Tom drops dead at his wedding reception.

As a result of his dad’s death, Tommy and Richard have to go on the road in Richard’s cherry Ford Mustang to sell brake pads and save the company, which is under threat from unscrupulous competitor Ray Zalinsky (Dan Aykroyd). To make things worse, it turns out that Beverly is a con artist who married Big Tom for his money, and the slimy Paul isn’t her son at all but her husband. With all of the workers in the auto-parts factory depending on them, Tommy and Richard can’t afford to fail in their mission. The only problem is that Richard is a nerd and Tommy is an idiot, and between them they couldn’t sell a hacksaw to a prisoner.

It’s a classic setup for an odd-couple road-trip film, and it recalls movies ranging from Planes, Trains and Automobiles and The In-Laws to black-and-white classics like Some Like It Hot and the Bing Crosby and Bob Hope road movies, where a pair of characters struggle though adventures and obstacles only to come out on the other side with a better understanding of life and one another.

In Tommy Boy the proceedings are given force by the comedic chemistry between Farley and Spade, who were close off-screen friends. Their back-and-forth banter is flawlessly timed, and Spade’s dry ripostes match perfectly with Farley’s lovable inanities. When Farley splutters, “Your brain has a thick candy shell,” in response to Spade’s uttering of the exact same line, or does a memorable “Fat guy in a little coat” dance, a large part of the humor comes from the fact that he’s playing off Spade’s anxiety and arrogance. For his part, Spade portrays a dismissive pencil-pusher with aplomb, fully earning the verdict that another character renders of him: “You’re a smug, unhappy little man, and you treat people like they were idiots.”

Still, both characters also have soft undersides. Tommy actually does want to do well in the world but has no idea how to go about it; Richard actually does care about people and the company but doesn’t know how to show it. Out of this odd couple – annoying on the outside, gentle on the inside – Tommy Boy builds an endearing relationship.

The rest of the cast also delivers. Dennehy is exactly right as a bluff, dominant salesman with a soft spot for his oafish son (it’s easy to imagine him as a version of Tommy when he was younger), and Aykroyd plays a nasally voiced, familiar-from-local-TV-commercials underhanded auto-parts magnate to perfection. The chronically underappreciated Lowe is particularly scene-stealing as a weasel-like petty criminal who’s obviously disgusted by the common people he must mingle with to rip off. He fully commits to various physical gags, including electrocuting himself by urinating on a transformer and getting dragged through the mud by Farley after a cow-tipping incident goes wrong.

In the end, the success or failure of a comedy like this one depends on its ability to create memorable scenes and lines. Tommy Boy is chock full of them, mostly delivered by Farley. There’s “Did you eat a lot of paint chips as a kid?” and “Brothers don’t shake hands, brothers gotta hug!” and “How do you know the guarantee fairy isn’t some crazy glue sniffer?” and “I swear I’ve seen a lot of stuff in my life, but that was … awesome!” and many more.

When Farley died in December 1997 from a drug overdose, he was entering what seemed like the prime of his career. It’s unclear how long that prime would have lasted – his approach was a degree more abrasive and bombastic than the generation of comedians that followed him, more based in a ’90s mode of cynicism than the gentle, openhearted mood that prevailed later – but it certainly would have produced more movies like this one: worth watching, worth quoting and worth remembering. And who knows? Perhaps, like Tommy Callahan, Farley would have discovered a softer, more sentimental side that would have held him in good stead as an actor. He certainly had the talent to do it.