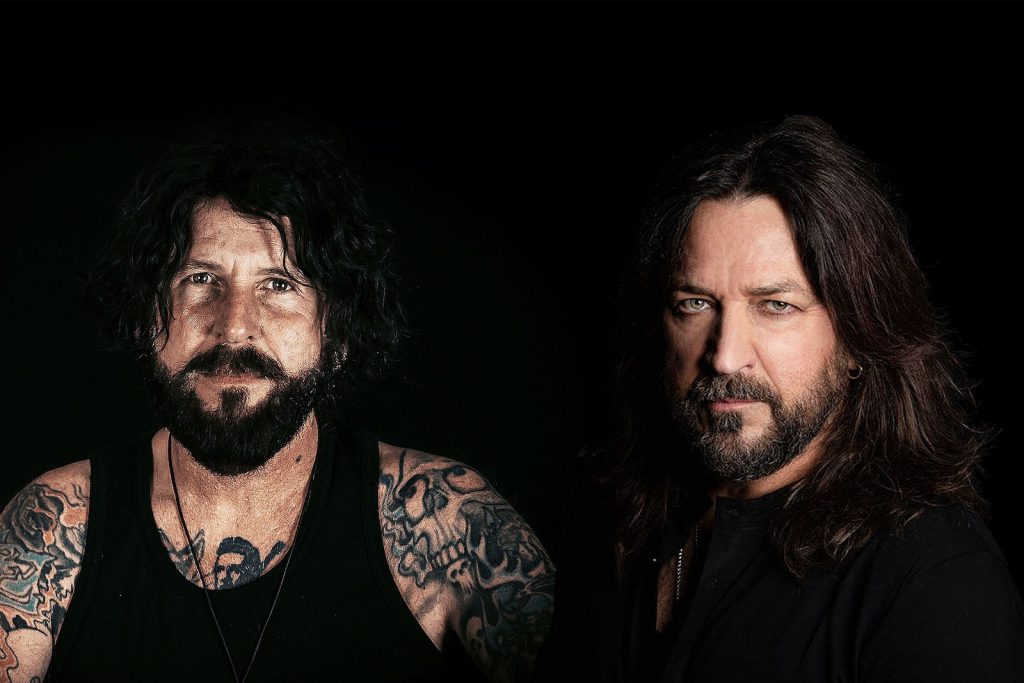 L.A. Guns, the guitarist’s main band, just released their new studio album Checkered Past, only four months after issuing Cocked & Loaded Live to commemorate the band’s breakthrough 1989 LP. While making Checkered Past, Guns also teamed up with Stryper frontman Michael Sweet to launch Sunbomb. Their debut album, Evil and Divine, came out in May.

Guns first got the idea for Sunbomb when Frontiers Records, which has released the last three L.A. Guns albums, asked the guitarist to start making more music for them. “They said, ‘Okay, what do you want to do?’ And [I said], ‘I want to make a satanic metal record,'” Guns tells UCR with a laugh. “They said, ‘Fine, you should have Michael Sweet sing on that satanic album.’ I’m like, ‘Exactly! Great idea!'”

Guns had already become good friends with Sweet by that point, and had tried to book a tour featuring L.A. Guns and Stryper, so it wasn’t difficult to get the vocalist onboard. “I texted him a piece of music,” Guns recalls. “He was in Michael’s fabric store with his wife, gets a text from me, and within 10 minutes he goes, ‘What is this?’ I go, ‘That’s me. Want to sing on it?’ He’s like, ‘Hell yeah, I want to sing on that.’ Okay. I go, ‘Do you want to sing on 11 of these?'”

“I basically finished full-strength demos for Sunbomb by the end of 2019,” Guns explains. “So I have 12 tracks for Sunbomb, one track for L.A. Guns. The label’s pressuring me for L.A. Guns, even though they’re putting Sunbomb out. Michael wasn’t ready. And so there was a week of time where I was like, ‘Phil [Lewis, L.A. Guns vocalist], here, you’ve got to work on this.'”

Instead, Guns convinced Frontiers to give him an extra year to work on Checkered Past while he and Sweet finished Evil and Divine. Guns and Sweet barely communicated while making the Sunbomb LP, as Guns completed their new album remotely. “It was completely anonymous,” Guns says. “It was kind of like having a pen pal. Like, ‘Here’s the stuff.’ ‘Alright, I’ll send you the lyrics a year from now.’ ‘Okay, see ya!'”

Yet, Evil and Divine didn’t suffer from this lack of communication. In fact, Guns calls the process “one of the greatest experiences of my life, because when I started getting the finished tracks back — seriously, a year later, one at a time over a period of a week, one at a time, two at a time — it was like Christmas for me.”

Guns praises Sweet as a “vocal gymnast,” saying he trusted him to draw on their shared heavy influences for their collaboration. Stryper have never been shy about their love of secular metal, despite being best known as the first Christian metal band to achieve mainstream success with 1986’s platinum-selling To Hell With the Devil. They later memorably updated classics from Black Sabbath, Iron Maiden, Judas Priest and Ozzy Osbourne on 2011’s The Covering.

“The one thing, knowing Michael, that I really enjoy, is he does have a sense of humor about [his faith],” Guns says. “He’s not closed-minded about things. He writes stuff like ‘To Hell With the Devil,’ and then he [sang] on the Sunbomb record – and it’s one of the most evil-sounding records you’ve ever heard in your life.”

Despite the casual, impersonal nature of Sunbomb, Guns holds Evil and Divine in the same regard as the rest of his discography — and he suggests it might not be a one-off. “I love that record,” Guns enthuses. “And however we did it, if we ever do another one, it will be done exactly the same way.”