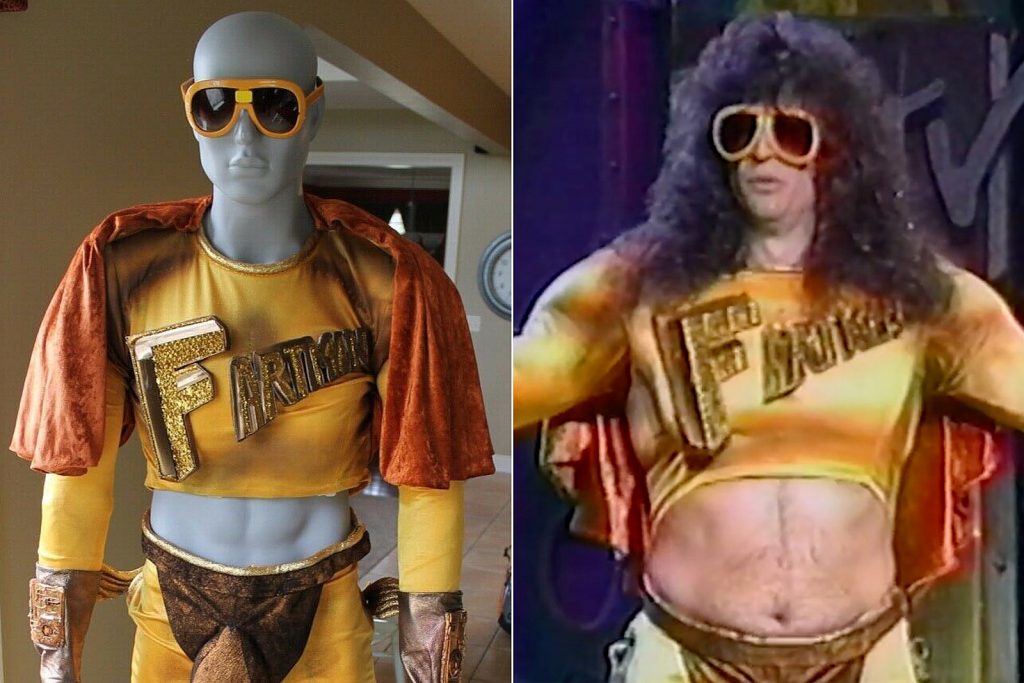 Howard Stern’s Fartman costume, made famous during the 1992 MTV Video Music Awards, is for sale.

“This was the actual outfit that was made for Howard,” notes the item’s official eBay listing. “Howard wore this complete ensemble on the 1992 MTV Video Music Awards back when millions of people actually used to watch TV for culturally defining moments.”

The description notes that the outfit is made up of “prescription Fartman sunglasses, Fartman cropped long sleeve top, cape, gloves, pants with exposed rear end, codpiece, leather boots, heavy-duty undergarment that the pulleys attached to and an ‘OK who farted?’ T-shirt.” Though the seller insists the costume “is in very good condition,” he does note that it “has definite wear and tear.”

Photos of the outfit can be seen below.

It was Luke Perry who welcomed Fartman, aka Stern, to the VMA stage in 1992. At that moment, the radio host descended from the rafters, cloaked in the absurd superhero getup now being sold.

“I am Fartman! Yes, behold the most beautiful of sights,” Stern proclaimed on the awards show, before turning around to reveal his butt cheeks exposed through two cutouts in the costume. “Is the camera getting a good shot of my beautiful ass?” Perry — gleefully playing along with the gag — would later grab Stern’s bare behind, before both men presented the award for Best Metal/Hard Rock Video (which went to Metallica).

Watch Howard Stern as Fartman at the 1992 MTV VMAs

Stern popularized Fartman in the ‘80s via his radio show and planned to create a feature film around the character in the early ‘90s. At the time of his VMA appearance, a Fartman movie seemed like a virtual lock to be made, but disagreements with the studio ultimately left the project on the shelf.

Still, Fartman’s appearance on the VMAs became a major pop-culture moment, celebrated in some circles and decried in others.

“It is without a doubt the number-one piece of Stern memorabilia in existence,” the costume’s listing declares, the seller claiming to have obtained the item directly from the shock jock himself. Those interested in the Fartman costume better have deep pockets, though: The current asking price is set at $173,870.