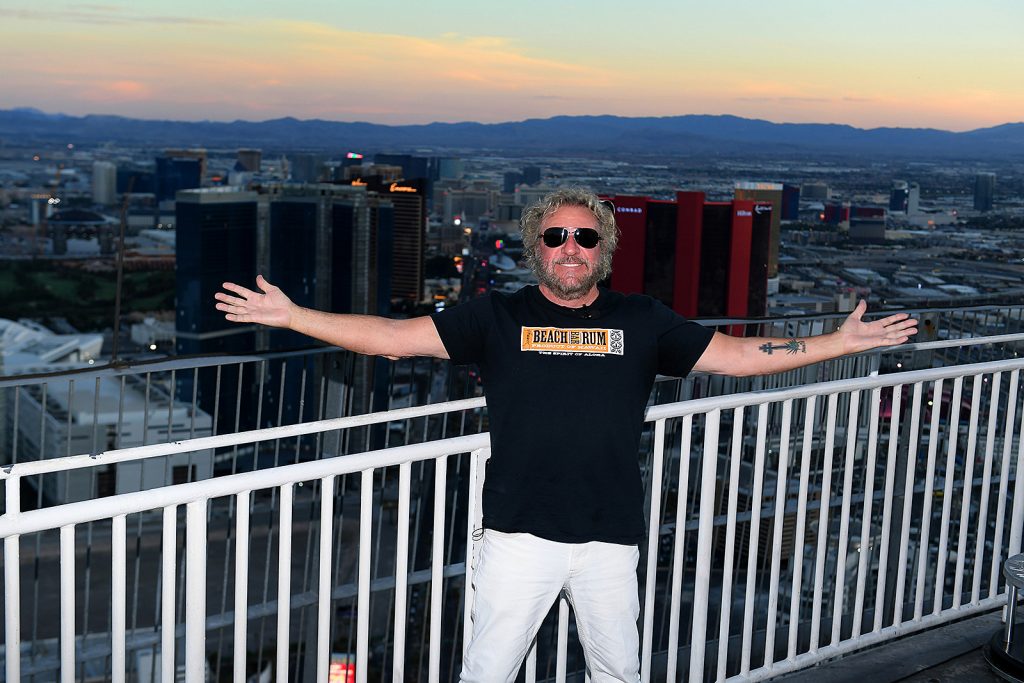 Sammy Hagar always tries to bring a little of his Cabo Wabo Cantina on the road. But with his upcoming residency at the STRAT Theater in Las Vegas, he’s putting focus on building an experience that replicates the spirit of his annual Birthday Bash performances at Cabo Wabo.

Six shows have been announced so far, and those initial dates sold out in less than two hours. Sammy Hagar and Friends will include his longtime bandmates Michael Anthony on bass, Vic Johnson on guitar and, for the first two performances, drummer Jason Bonham.

In addition to those members of the Circle, as well as occasional appearances by musicians from his previous solo group the Wabos, others may show up to help out from time to time. Hagar has invited friends like Toby Keith, Rick Springfield, Kenny Chesney, Vince Neil and Jerry Cantrell to help out.

As Hagar tells UCR, the guest list is one part of the night that will require a small amount of planning. Many of his famous friends just like to show up at the Birthday Bashes. He told the Las Vegas Review-Journal earlier this year that “the Circle has the best set list in the world, and the Wabos play a lot more of my old, deeper tracks, and my old vintage catalog from the rocker era, from the ’70s, ’80s, it’s a mosh-up.” So fans can expect songs by Van Halen, Montrose and other Hagar-related tracks from his catalog when he hits Las Vegas in October.

What’s the first memory you have of going to Las Vegas?
Going to Las Vegas in the old days, the people that played there were going into retirement. Like, I remember, before the [Rolling] Stones finally played in Las Vegas, it was like, “Wow, you don’t play Las Vegas. It’s not cool to play Las Vegas.” You’d play an arena, but you don’t play a casino. The Stones did it – they played [the Joint] at the Hard Rock, I believe – the original Hard Rock, that little tiny room. It blew everybody’s mind. It was like, all of us musicians are going, “I guess it’s okay to play Vegas now!” Because they used to offer so much money. More money than you’d make anywhere else. I went and saw Huey Lewis do it one time, and I said, “Huey, man, what are you doing in Vegas, doing a residency?” He’s going, “Man, they’re paying the fuck out of me!” I thought, “Yeah, man, but you’re ruining your image!” I guess all of that’s changed, because for me it has! [Laughs] Here I am doing it, and it seems like everybody’s doing it. It’s changed so much. It’s turned into, like, some of the best restaurants in the world are in Las Vegas. Certainly some of the best talent you could see, night after night. You can walk in on a Monday night in Las Vegas and see five really great bands or artists playing in town. All of the greatest shows.

It’s just turned into the entertainment capital of the world. I’m sure they have them in China, and they’ve got these big casino groups and stuff all over the place, but Vegas is Vegas. I don’t know. My first memories of it were, “No, no, no. Sin City, don’t go there.” I’m not a gambler, so I don’t really care about that. The food got me. Probably the first thing that put the hook in me was the Stones playing and then the food. I’m going, “Man, I can go to my favorite restaurant in Paris … [because it] is in Vegas now!”

Some of these Vegas shows are really tightly choreographed with the same set list every night. The nature of what you’re doing, with special guests and all of that, seems like you’re going to have a lot of room to stretch out and make each show different.
Yeah, if this thing works out. The only problem we have is we’re underplaying. The size of the venue, it’s only 800 people. It’s like the Cabo Wabo. For me, that’s when we’re packed [at] the Cabo Wabo [for] the Birthday Bash – we squeeze about 800 people in there. We probably won’t be as packed in Vegas, because they won’t let you make a sardine can out of the place, I’m sure! They’ve got some fire department laws or something. But it’s going to be packed at 800. I wish it was about 1,500 or 2,000. Because it’s just a shame – we just keep putting shows on sale and they just go, bam! bam! The idea is to continue this next year, like a month on and a month off. Go out on tour a little bit, come back and do a month. That’s the plan. The room is booked through the end of the year unless a show gets canceled here or there, and then we’d come in and do it again. I’ll do as many as I can.

But the idea is to start doing things like playing a whole album. Like, we’re going to play the Montrose record for the first half of the show. Things like that. We’re going to play the OU812 record in its entirety. When friends come, we’ll just make it into that same thing I do in Cabo. If Tommy Lee walks in, he jumps on the drums, and we play a couple of Motley Crue songs. Led Zeppelin songs, whatever he wants to play. It’s the way I’ve always done it in Cabo, and that’s what I plan on doing there. Because it’s a small venue and it just feels personal.

That’s awesome.
Yeah, you call it a residency. To me you’re saying, I’m making this my residence. This is my house. This is my home. So what’s going to happen when somebody comes in your home? You’re not going to put on a show for them. You’re going to throw a party, you know? The food in the restaurants on the nights we play are going to be catered towards Cabo food – tacos and Mexican food. The drinks are from both of my brands. There will be Beach Bar Rum drinks, there will be the [ready-to-drink cocktails], there will be Santo Tequila, margarita shots. Inside the venue and all around the whole thing, we’re painting. We’re experimenting now with a type of paint that you can’t see. It’s just clear. We’re doing all of these great murals that look just like the inside of the Cabo Wabo.

We’re going to wrap the inside of the place with them and put a big lighthouse onstage, like you’re at the Cabo Wabo. When the lights go down, they hit ‘em with the dayglow ultraviolet, and the place is going to turn psychedelic. I mean, I really want to blow peoples’ minds, but we’re limited to how far we can go. But my production team is all over it. They’ve been there, they took all of the measurements and we’ve got murals and we’re experimenting with the paint now to make sure it doesn’t look too tacky when the lights are on. We’re going to put it up and take it down when we’re done every weekend. The other shows, they don’t want to have that shit going on. The Michael Jackson show that’s in there right now, I’m sure they would like to see Cabo Wabo psychedelic paintings on the wall! Hopefully, it looks good enough when the lights are on, so people aren’t wondering, Why does it look so funky in here? All of a sudden, the lights go out and it’s going to be, “Whoa, here we go!” I just really want to make a great experience. It’s something I’ve always loved doing. My favorite thing I’ve ever done is build the Cabo Wabo and have a place to go play and just play and do what I do. So I really want to bring that experience to Las Vegas. It’s my favorite thing.

The thing at Cabo over the years has been the star-studded jams and the feeling that you don’t know who is going to show up. At this point, who remains high on your list that you’ve tried to get to come down and jam but has never worked out?
Eric Clapton, Jimmy Page, Jeff Beck, Mick Jagger, Keith Richards, Bruce Springsteen. I guess that’s enough for now, right? I really want Keith. If there’s one guy, it would have to be Keith, and we’d just play the Stones all night. If Jimmy came, we’ll play Led Zeppelin all night. I know every one of them fuckin’ songs. Are you kidding me? No teleprompter necessary. But I ain’t sayin’ those guys are coming. The truth of the matter is, 75 percent of the people that show for my Birthday Bash, I don’t know they’re coming. Nobody tells me. I hear rumors all of the time.

Kenny Chesney was the one that was always trying to surprise me. Three times, he flew down with his whole band and played on a night off as well as jammed with me. That was always a surprise, because Kenny’s telling people, “Don’t tell anybody.” I’d say, “Kenny, c’mon man, when are you going to come down?” “Aw, dude, I can’t make it this year!” Then he would show up! So that’s kind of the big surprise birthday present. A lot of people like to do that. But this ain’t my birthday, so the fuckers gotta tell me they’re coming so I can be prepared! [Laughs]

Have you ever invited David Lee Roth to come to Cabo?
I certainly have. When I did the High Tide Beach Party, I invited Roth. I told him he could headline the whole event. I’d play before him. Not because I feel like I’m less than him, but because I was trying to rope him in. But he’s not a fun guy. He doesn’t play well with others, I don’t think. I think that would be the way to put it. I’m not even sure that he’d want to do a tour [together] again – not that I would, because I definitely wouldn’t, from the last experience. But I don’t even know if he’d ever want to do that again. I have no idea where his head’s at. But he’s invited anytime, anyplace, anywhere I go. I would play the old Van Halen stuff. Me and Mike – I’d sing background and let [Roth] do his thing. It’d be awesome. But I’m not sure it will ever happen! It’s so tongue-in-cheek to me, to think about him and I ever doing anything ever again.

It seems like you’ve made numerous attempts to build a friendship there.
Totally.

It appears that for whatever reason, he’s never been able to let his side of the perceived rivalry go.
Yeah, it’s so weird. Because it’s so silly now, especially after the death of Eddie [Van Halen]. There’s not a Van Halen anymore, so it ain’t like we’re competing for who is going to be in the band or anything like that. It’s silly. But who knows, I might run into him sometime and we can meet as grown-ups and adults, finally.