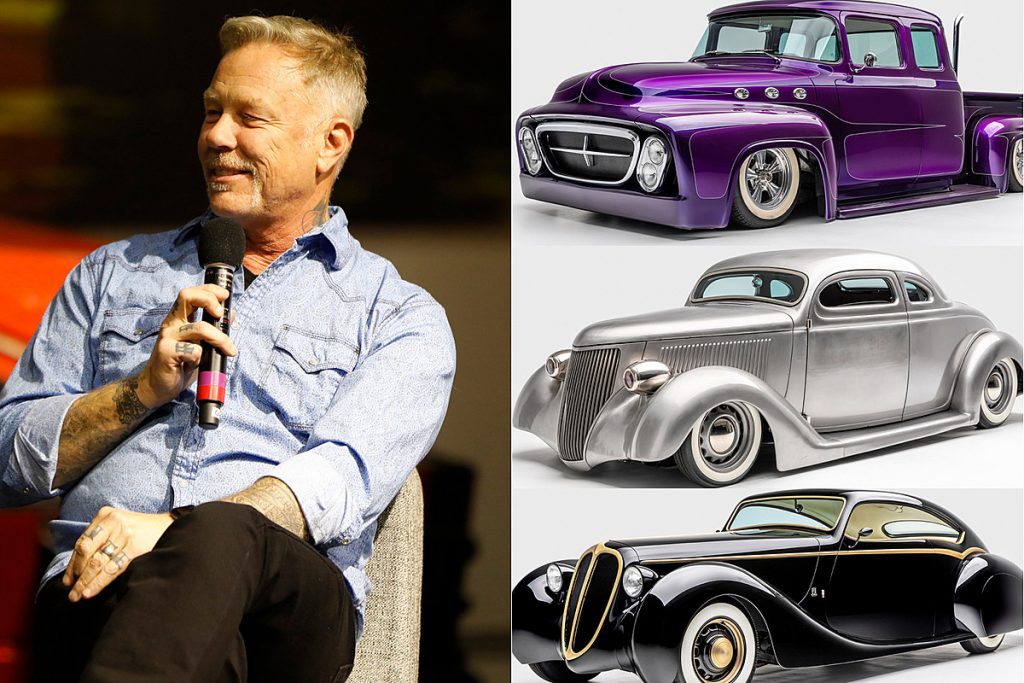 Metallica‘s James Hetfield made his first public appearance since entering rehab last night at the opening reception for a new museum exhibit dedicated to his custom-built cars.

You can see exclusive and event-provided photographs of the event and the vehicles below.

Hetfield donated 10 of his classic custom vehicles to the Petersen Automotive Museum for Reclaimed Rust: The James Hetfield Collection. “I believe everyone needs a second chance or third chance or fourth chance in life,” he said of the exhibit’s name during a Q&A session. “Knock the rust off and continue the story.”

Metallica bandmate Robert Trujillo was also in attendance, along with former Van Halen bassist Michael Anthony and Jerry Cantrell of Alice in Chains.

The noted car enthusiast, who says he’s built 11 custom cars over the past 14 years, said he was proud to have his work on display at the famed museum. “There’s no other place like this,” he noted. “The Petersen is the pinnacle. It’s the best place to have your vehicles. They weren’t doing me much good sitting in my garage. I loved looking at them. The best part is they’re all together. I didn’t want to auction them off and [have them] go all over the world. It’s a collection. It marks my life.”

The Metallica frontman had been out of the public eye since entering rehab last September. Hetfeild has struggled with addiction issues for years and, according to the band’s statement, determined it was necessary to “re-enter a treatment program to work on his recovery again.”

In addition to the custom vehicles, the exhibit features guitars, photographs and memorabilia. Hetfield is a lifelong fan of classic cars, amassing a collection of rare and distinctive hot rods. The singer’s 1948 Jaguar “Black Pearl,” 1934 Packard “Aquarius,” 1953 Buick Skylark “Skyscraper” and 1937 Ford Coupe “Crimson Ghost” are among the vehicles included in the exhibition.

Fans will have the opportunity to admire the rocker’s collection when Reclaimed Rust opens to the public tomorrow. A book about Hetfield’s classic cars — also called Reclaimed Rust — is due in May.

Meanwhile, Metallica are ramping up for a busy 2020. After a brief tour of South America in April, the group will headline five different U.S. festivals throughout the summer and fall.