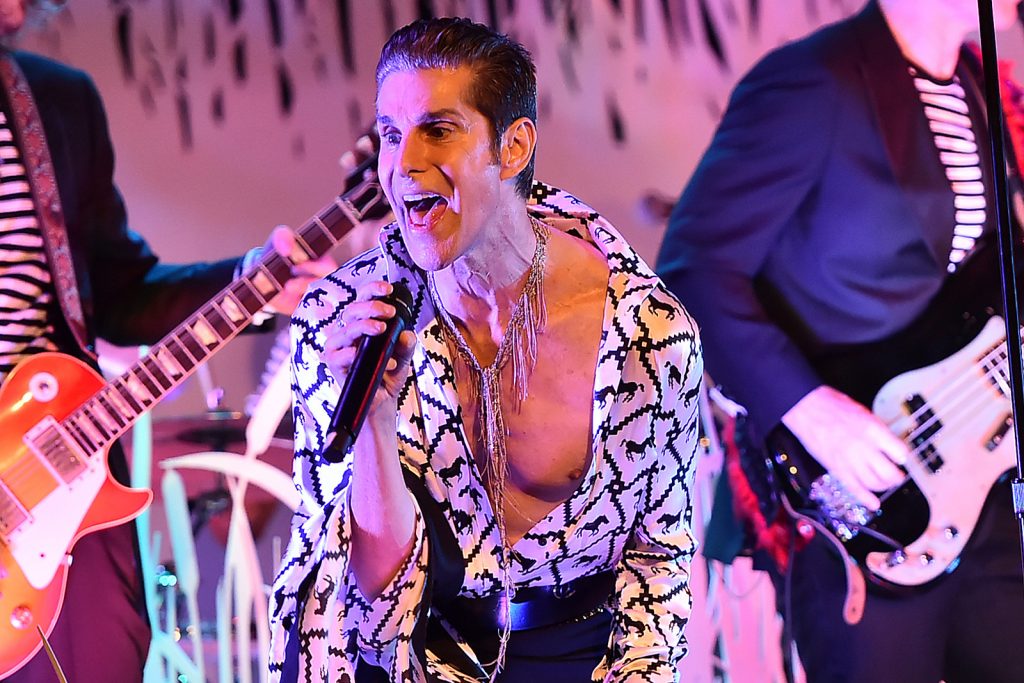 Jane’s Addiction stormed Dallas’ American Airlines Center on Sunday night during the opening stop of their Spirits on Fire Tour in support of the Smashing Pumpkins, barreling through an 11-song, hourlong set with the charisma and ferocity of headliners.

Decked out in matching, acid-washed black vest and pants, Perry Farrell sauntered on stage with a wine bottle in his hand, swigging from it intermittently throughout the evening. He set the mood early with show opener “Up the Beach,” goading the crowd with his reverb-drenched vocals and prowling the stage with elven aggression.

“I love coming out here night after night and shaking my balls!” Farrell told the audience. “Don’t it feel good, fellas?”

The quartet — Farrell, drummer Stephen Perkins, bassist Eric Avery and guitarist Troy Van Leeuwen (of Queens of the Stone Age) — was augmented by a troupe of exotic dancers who climbed, swung and rode a rocking horse across the stage. Van Leeuwen was deputized to fill in for original Jane’s Addiction guitarist Dave Navarro, who recently announced he would sit out this tour due to continuing long COVID symptoms. While the six-stringer may have lacked Navarro’s sex-god flamboyance, he preened and pranced across his quadrant of the stage and nailed Navarro’s fiery solos.

The audience fully erupted when the band broke into “Jane Says,” signaling the start of a hit-filled joy ride that included “Been Caught Stealing,” “Mountain Song” and furious set closer “Stop.” The group got heavy on the riff-driven “Ocean Size” and sprawled out on the seven-plus-minute “Just Admit It, Ted…,” whose “sex is violent” refrain gave way to some pointed social commentary from Farrell.

You can see videos of the performance and the full set list below.

To that end, Navarro — who admitted he was “personally gutted” about missing out on the tour — announced he’d “be working on some new Jane’s material in the studio here in L.A” while his bandmates were on the road.

The Spirits on Fire tour is scheduled to conclude Nov. 19, with a performance at the Hollywood Bowl.

Perry Farrell’s group has endured a steady stream of changes over the years.