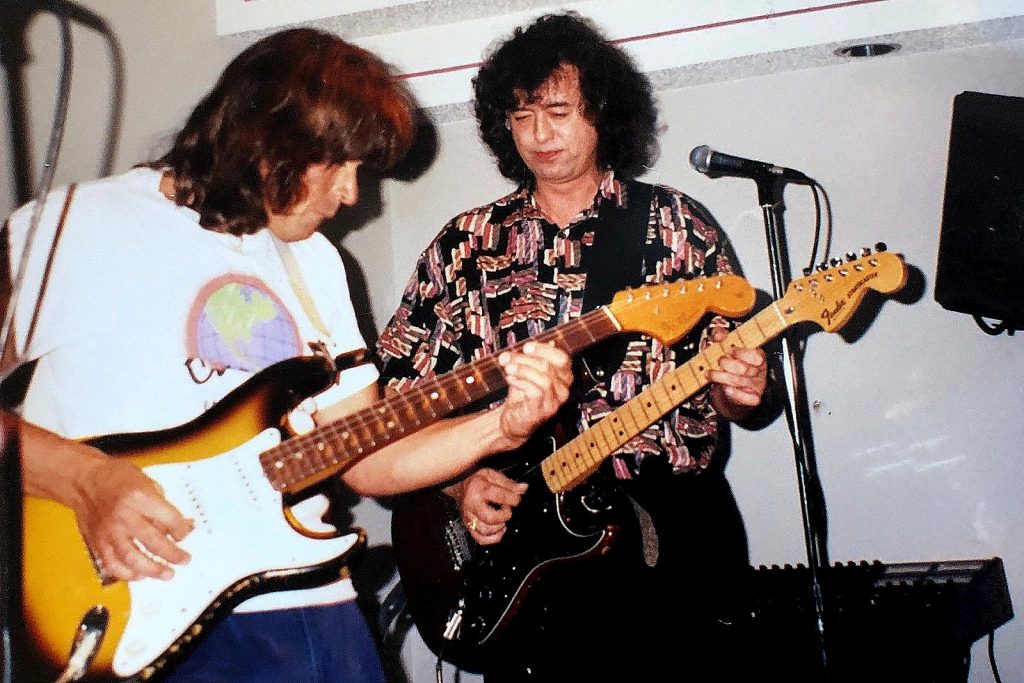 In spring 1991, Jimmy Page hit the studio to record his first album since 1988’s tepidly received Outrider. This time around, it was a more collaborative effort, as he linked up with David Coverdale.

The Whitesnake singer, who’d been living in Lake Tahoe, Nev. since the late ’80s, invited the guitar legend to visit the swanky locale and work on material. During downtime, Page frequented the area hotspots and wound up jamming with a couple of shellshocked bar bands, starting Memorial Day weekend.

One night in late May, when guitarist Rene Best showed up at Crystal Bay Casino to play a gig with the Solid Ground Band, two excited bandmates told him the legendary Led Zeppelin member was sitting at the bar. Having dealt with the known pranksters for some time, he didn’t believe it for a second and decided to call them out.

“[Page] had his face down, sittin’ at the slot machine,” Best tells Ultimate Classic Rock. “I thought he was some video guy.” The Texas native casually walked up to the man at the console, put a hand on his shoulder and enthusiastically said, “Hey Jimmy!”

“He looked at me, and it was him!” Best says. “I just about shit rubber nickels — I couldn’t believe it!”

Page was cordial, telling Best if the band was good, he’d stick around. Otherwise, he was gone.

He didn’t leave. Better yet, between sets he took them up on an overture to sit in with the group. Their singer, who didn’t even know who the rock royalty was — other than someone famous, given the burgeoning crowd — did one song then handed over the microphone to Best, wanting to watch a celebrity spectacle from the audience while adding occasional backing vocals.

“The place went from no people to, like, standing room only,” Best recalls. “My mind was fucking tweaked, OK? He makes all these facial contortions when he plays [and was leaning on me] like I was Robert Plant!”

The Solid Ground Band stuck primarily with rock and roll standards by Chuck Berry, Elvis Presley and some winding blues numbers that best suited Page’s style. Their keyboardist had a four-track connected, though Page warned him not to let the recording get out. It was futile request: The widely spread Crystal Bay bootleg became the only audio document to date from his time in Lake Tahoe.

“[Page] was very nice, very kind. He signed everybody’s autograph,” Best says. “Something about the whole thing touched me. He wasn’t arrogant. He had a very kind heart. It was just magic. It was like jumping into a vortex or something.”

A bit further south in Lake Tahoe, guitarist Robbie Gade wasn’t as enthused about the turn of events.

“I heard he went to Crystal Bay and [played] with some cheesy casino band, and I was so pissed he didn’t come to my club,” Gade tells Ultimate Classic Rock. “They were pretty good, but they weren’t rockers.”

Gade was part of the trio Public Eye, who were a familiar sight around the Tahoe region. Coverdale even occasionally sang with them. One such night, when Gade asked if any new Whitesnake music was on the horizon, the singer noted his plan to collaborate with Page. His heart beating fast, Gade made a mental note to bring an extra amp and guitars in the coming weeks, “just in case [Page] showed up.” Soon enough, on a particularly dead Memorial Day weekend night at a spot called Legends, it happened.

“All of the sudden Jimmy Page and his bodyguard walk in — and I saw him right away,” says a laughing Gade, recalling how the guitarist grabbed a seat right up front, some 15 feet away. “It’s me up there playin’, and Jimmy Page is sitting there watching me, and there’s, like, half a dozen other people in the bar. I’m just…‘What am I gonna do here?’”

Hands shaking, he did some open tuning, Keith Richards/George Thorogood-style playing. After the set, Page called him over and said, “Sounded great, man!” With the next round of songs about to start, Gade mentioned the extra amp and extended a sit-in offer to an unassuming Page, who brightened up and asked, ‘Would it be OK?”

“We got up there, and I said, ‘What do you wanna do — can we do some Led Zeppelin songs?” Cade remembers. “And he says, ‘Yeah, anything but ‘Stairway to Heaven’ or ‘Living Loving Maid’ — he hated that song.”

Once Page was locked in, Gade called his then-girlfriend, who was working as a waitress nearby, and told her to get off from her job, come by and bring her camera. It truly was a once-in-a-lifetime experience. Or so he thought.

“Within the next hour, about 100 people showed up — that’s how quick the word got around,” Gade says. Public Eye ripped through a nearly two-hour set featuring Led Zep songs like “The Lemon Song,” “Communication Breakdown,” “Good Times Bad Times” and “Whole Lotta Love.”

“It was incredible,” Gade says, adding that his high-voiced bass player handled vocals. Afterward, the two six-stringers sat at the bar and chatted. “He really complimented my guitar playing — I was like, ‘Whoa, cool!’” Gade told him the band’s schedule of Friday and Saturday nights each week at the bar, with an additional Sunday due to the Memorial Day weekend.

“The next night I get there, and he’s sitting at the bar,” Gade marvels. Word had clearly gotten around that Page found a local act with which to jam: “There was a pretty good crowd there already — the place was packed. I’d say by 9PM, there was probably 600 people in this room that held 300. That night was absolutely killer ’cause I went home and practiced and made a setlist and kinda knew what I was gonna call out.”

The following evening wouldn’t be as fruitful. Fans from as far as Sacramento had heard the news about the musical icon being in the neighborhood. And with anticipation at a fever pitch, suddenly he wasn’t there.

“Sunday night, [when] I get to the club, cars were parked on the highway and the parking lot was full,” Gade says. “I get in there, and you couldn’t move. No Jimmy Page. He never showed up that night. I was so bummed.”

The next weekend, Public Eye weren’t doing the Tahoe bar scene. Instead, they’d been booked to play a private gig at a country club in nearby Incline Village. Gade says nobody was even paying attention to the band, instead just milling about.

“God, what a difference a week makes,” Gade said to a friend during a break. “Last week I’m playing with Jimmy Page, and this week I’m playing at a high school parent’s dance, knowing that Jimmy Page is probably at the club looking for me.”

The girlfriend of Gade’s friend was incredulous, rolling her eyes and delivering a basic, “Yeah right…Jimmy Page” Almost as if on cue, Page showed up in a suit and tie, coming from some sort of formal affair. He had indeed shown up at Legends, asked about Gade’s whereabouts and was directed to the country club.

“He never brought his guitar,” Gade says. “I thought he’d want to play a Les Paul, and I was going to borrow one, but he said, ‘No, no — I like playing Stratocasters.’”

Page would end up playing four of Gade’s guitars over the period their four shows together, and it looked like the pair were destined to keep linking up…but then family duties took over. Gade went on a trip to Hawaii with his brethren, and when he got back, Page had moved on from Tahoe and was off to record the Coverdale/Page record at a proper studio. Still, none of that dampened a truly incredible experience.

“Every time I was playing a solo, he was right in my face smiling,” Gade says. “I think he had more fun playing with me than he did in years — you can tell from the photos. He was beaming. I think he was just having fun, playing in a small bar, you know? It was 30 years ago, [but] I remember every second of it.”