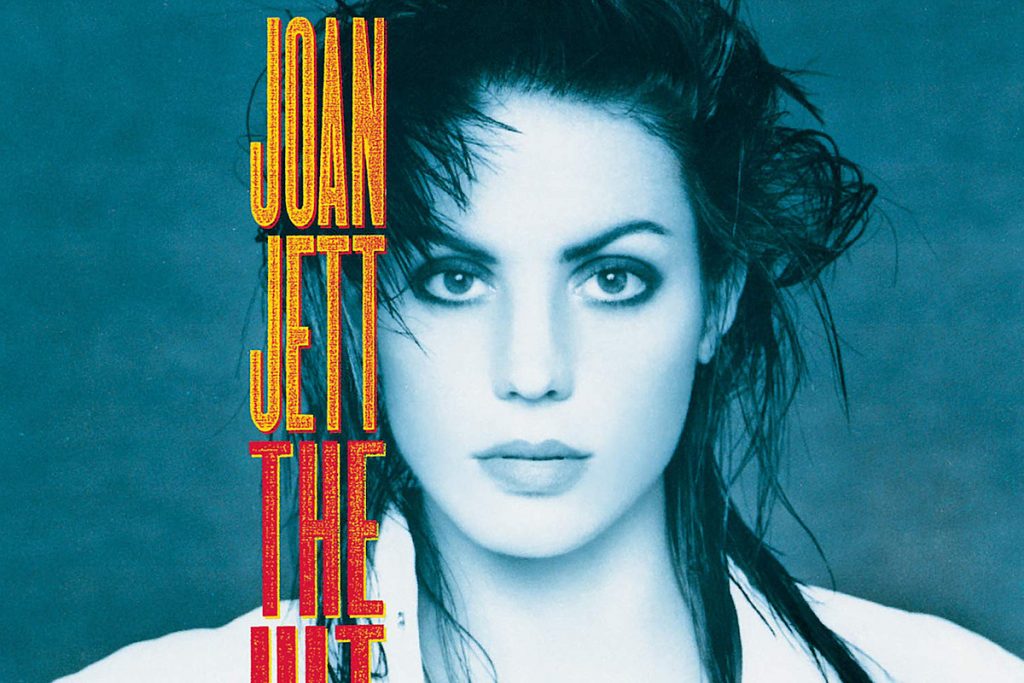 Joan Jett loves cover songs almost as much as she loves rock ‘n’ roll. That’s the key takeaway from The Hit List, Jett’s eclectic covers collection that touches all the hard-rock bases from AC/DC to ZZ Top.

Released on Jan. 16, 1990, the project must have seemed like the perfect match for artist and material. After all, when Jett emerged from the smoking ruins of the Runaways to launch her solo career as a stripped-down rocker in 1980, she quickly paid tribute to her inspirations.

Half the cuts on her 1981 solo debut Bad Reputation are incendiary covers that established Jett as a tough and tuneful artist who refused to play the usual music-industry games. Two tracks stood out among the cover tunes. Instead of relying on her raspy drawl, Jett sang the hell out of Lesley Gore’s 1963 hit “You Don’t Own Me,” carrying the feminist anthem into a new era. Jett also proved she was willing to tweak rock tradition by storming through a blistering version of Gary Glitter’s glam-trash manifesto “Do You Want to Touch Me (Oh Yeah).” It’s a tribute to Jett’s performance, and longtime collaborator Kenny Laguna’s full-throttle production, that their take on the song escaped the sleaze that’s littered Glitter’s career since his pedophilia-connected convictions in 1999, 2006 and 2015.

Incredibly, in the same year as her debut, Jett delivered a classic slice of rock ‘n’ roll, as well as her signature song, when she released “I Love Rock ‘N’ Roll,” the title track of her follow-up album and her first release with backup band the Blackhearts. It’s easy to forget that this is also a cover. Jett’s menacing drawl, backed by a jackhammer rhythm section and ratcheting guitars, ripped the clumsy and blustering original by the Arrows to shreds. Another cut on the same album cemented Jett’s reputation as a master of covers that transcend their sources. She rescued Tommy James and the Shondells’ “Crimson and Clover” from the incense-and-peppermints ghetto of ’60s psych-pop and turned it into crisp and muscular bubblegum rock.

In 1990, one decade into Jett’s solo career, an all-covers collection must have looked like a no-brainer. It was an opportunity for Jett to acknowledge the tunes that kicked-off and sustained her love of rock ‘n’ roll with her own version of David Bowie’s Pin Ups or the Band’s Moondog Matinee. The Blackhearts were augmented with a roster of guest stars including the Kinks’ Ray Davies, Darlene Love and the Uptown Horns, while Jett drew on her encyclopedic knowledge of rock music past and present to assemble the track listing.

What could possibly go wrong?

For starters, producer Laguna, aided by co-producers Jett and Thom Panunzio, seems to have lost his talent for the crisp and punchy. Too many songs sound hampered by suffocating overproduction that muffles their impact, and tracks that should be sharp and sinewy lose their way due to fuzzy focus. Jett courageously casts a wide net for the hits she covers, but in some cases it’s too wide. Despite the singer’s grit and firepower, her brand of rock hews closer to the bubblegum-y glam of Sweet, Suzi Quatro and Slade, than the blistering punk of Sex Pistols, the Texas 12-bar blues of ZZ Top and the mystic psychedelia of Jimi Hendrix.

As “Roadrunner,” “Dirty Deeds Done Cheap,” “Love Me Two Times” and particularly “Celluloid Heroes” illustrate, there’s a lot of latitude in Jett’s lane. Her striped-down, hooky rock ‘n’ roll can take on many styles and genres, keeping one foot in tradition while celebrating the genre’s ephemeral fun and occasional bubblegum roots. The collection is meant to be Jett’s unabashed valentine to the timeless appeal and power of rock, but with too many detours to dead ends, The Hit List just misses its mark. Below, we break down the LP track-by-track.

The set kicks off with a snaring metallic take on AC/DC’s “Dirty Deeds Done Cheap” (with a title curtailed to “Dirty Deeds”). Angus and Malcolm Young’s buzz-saw guitar riffs on the original are tightened for a girl-group/garage-pop makeover that’s a touch too scrubbed, but a squealing glam-rock sax reintroduces a sense of risk and danger. Jett’s double-tracked vocals are softer yet more alluring than Bon Scott’s adenoidal snarl, and on the balance this cut is a keeper.

After AC/DC, a pretty version of the Everly Brothers’ “Love Hurts” seems designed to induce whiplash in the listener. Coiling guitars and brash power chords give this take crunch and heft, yet the arrangement hews too closely to Nazareth’s 1975 version rather than the Everlys’ 1960 original. The song cries out for Jett’s full-blooded vocal approach of “You Don’t Own Me,” but it doesn’t get it. Instead of the Everlys’ yearning brotherly harmonies or Nazareth singer Dan McCafferty’s anguished wail, Jett’s subdued singing here is the aural equivalent to the airbrushed portrait of her that graces the cover of The Hit List.

Sex Pistols’ “Pretty Vacant” presents an opportunity for course correction, but Jett and the Blackhearts don’t quite connect with the song. Jett wisely goes gruff and raspy on her vocals, but she can’t match Johnny Rotten’s sneering piratical yowl. There are too many guitars and most are far too clean, and punchy horns seem a touch incongruous amid the punk rock sturm and drang. The result is pretty if not entirely vacant.

In contrast, a heartfelt tribute to the Kinks’ “Celluloid Heroes” includes rolling churchyard organ and fat resonating power chords that set the mood. That’s bolstered with chunky strummed guitars that feature just the right amount of grit. Jett’s vocals walk a tightrope among determination, yearning and heartbreak, turning the song into a glam ballad worthy of David Bowie or Elton John. Here Jett clears the high bar she set with “I Love Rock ‘N’ Roll.” The Kinks’ original is already a great tune; Jett nearly transcends it.

A ratcheting run-through of ZZ Top’s “Tush” is a fastball right down the middle that clears the strike zone. There’s a bit too much hi-hat for Texas blues, and the grimy guitars can’t match Billy Gibbons’ honky-tonk howl, but Jett’s gruff drawl sells the song. The production could be stripped down even more, but along with “Celluloid Heroes,” “Tush” scores one of The Hit List’s bulls-eyes.

The Blackhearts’ version of the Chamber’s Brothers’ “Time Has Come Today” takes chances and narrowly comes up in the win category. Jett’s vocals are tough and rangy, but a coiling guitar intro is anemic and weedy. Typical for the album, Laguna and crew’s production is too dense, but jackhammer drums and honking horns clear a pathway through the clutter. A dropout in the middle is inspired, a swirling cacophony of guitars, horns and sound effects that’s an effective psychedelic sirocco of sound.

“Up From the Skies”

A pop-funk ramble through Jimi Hendrix’s “Up From the Skies” should be another psych-rock winner, but it falls short. Corkscrewing guitars with razor-sharp funk accents get things off to a promising start, but the tune devolves into an innocuous slice of ’60s-styled pop. Jett and the Blackhearts strip the original of its psychedelic mystique and squalling spiraling guitars but have nothing to replace them. “Up From the Skies” should be the UFO mothership coming down to claim its children. Instead the kids are tapping their toes while booking an Uber.

“Have You Ever Seen the Rain”

Creedence Clearwater Revival’s “Have You Ever Seen the Rain” is a damp misfire. Jett’s grainy alto hews too close to John Fogerty’s original vocal, and the massed glam-rock harmonies don’t fit the song’s disillusioned soul-baring vibe. The track’s jazzy electric piano seems better suited to a late-period Doobie Brothers track, and the tasty guitar licks seem to have wandered in from a Steely Dan session.

The album’s frequently overstuffed production is stripped down to bass, guitar and drums for a brisk run-through of the Doors’ “Love Me Two Times,” and the song is better for it. Jazzy rasping guitars coil around Jett’s seductive yet threatening vocals. This version is missing the original’s creepy carnival keyboards but makes up for their absence with a gnarly slipknot guitar solo, making this cover a powerful scalpel-sharp rocker.

The album concludes with one of its strongest tracks, Jett’s ebullient take on Jonathan Richman and the Modern Lovers’ “Roadrunner.” Except for replacing “New York” with “U.S.A.” in the lyrics, The Hit List’s “Roadrunner” is indistinguishable from Jett’s take included on her 1986 album Good Music — and that’s a good thing. Crunchy guitars with chopping fills drop out to pumping bass and Jett’s sassy, defiant vocal before dovetailing into a surging shout-along chorus. Jett and the Blackhearts nail the original’s nerdy teenage joy of driving in cars and watching wide-eyed as the city lights go flickering by.