Joe Jackson Grows Up on ‘Night and Day’ 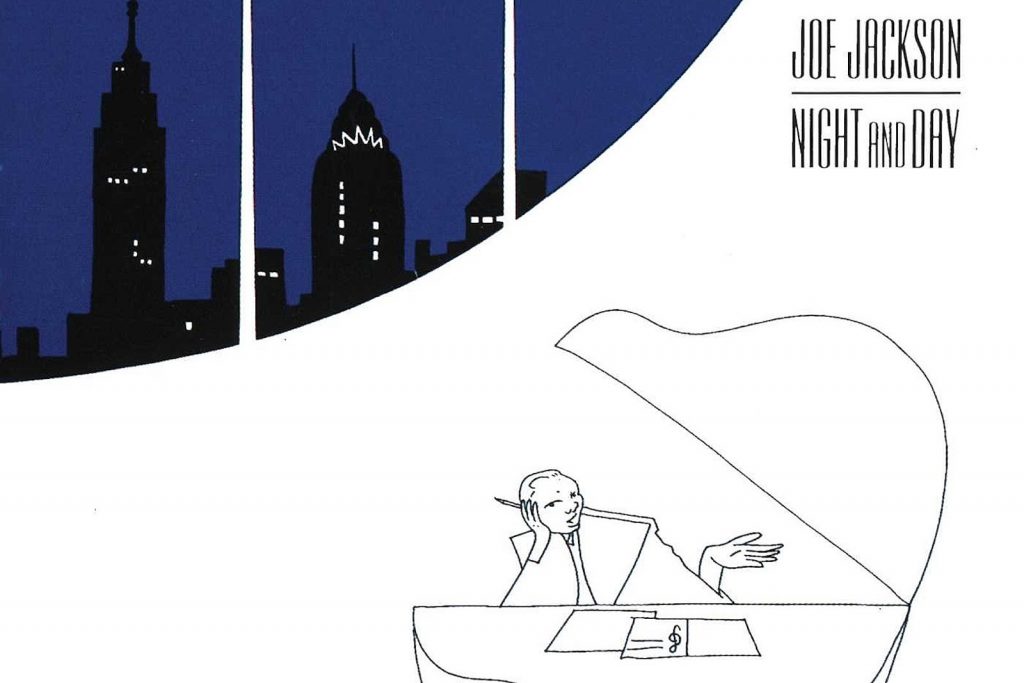 Joe Jackson‘s detour into the ’40s sounds of Louis Jordan and Cab Calloway on 1981’s Jumpin’ Jive should have made clear that he was more than just another of the new wave’s “angry young men.”

If not, then Night and Day was here to help.

Jackson’s fifth album set the scene in June 1982 with a stylish art deco cover and a Cole Porter-inspired title. He was making grown-up music now, mixing sophisticated pop, a dash of salsa, chamber music, Eastern modes and splashes of jazz. Still, Jackson shied away from the idea that any of it was meant to be backward-looking.

“I’m not a nostalgist,” Jackson told The New York Times back then. “Since I wasn’t born until 1954, how could I be nostalgic for a time I never lived in? The music I make is for the moment – for 1982.”

He’d adopted New York City as a home base when not on tour, and Night and Day pulsed with its energy and rhythms, its passions and its sins. The LP lacked the nervy musical attitude of 1979’s Top 20 U.S. hit Look Sharp!, but that didn’t mean it was without edges. There was just more to Jackson’s musical vision.

“Rock ‘n’ roll is too narrow and limiting. That’s why I’ve been trying to make connections with earlier traditions,” Jackson told the Times. “There’s so much about rock ‘n’ roll tradition that I hate. The idea of ‘hope I die before I get old,’ for instance. For me, whatever golden age there was in rock is definitely long gone. People have weird ideas about the history of rock. They think it came suddenly out of nowhere, and they’re absolutely wrong. That’s what Jumpin’ Jive was about. Louis Jordan’s jump-blues was a huge influence on Chuck Berry and Bill Haley.”

At first, it seemed as if Jackson had lost his audience with this latest musical turn. He impishly released the complex and moving “Real Men” – a song that takes a cutting look at gender roles – as the LP’s first single, then watched it fail to break the Top 90 in his native U.K. “Real Men” didn’t even chart in the U.S. But then came “Steppin’ Out,” with its twinkling piano flourishes, stirring mechanical rhythms and soul-lifting lyrics. The single promptly went to No. 6, helping Night and Day become Jackson’s only Top 5 smash in both the U.S. and U.K.

The momentum carried Jackson’s impossibly sad ballad “Breaking Us in Two” into the Billboard Top 20, while “Steppin’ Out” garnered Grammy nominations for Record of the Year and Best Pop Vocal Performance. Jackson suddenly found himself on a much bigger stage, figuratively and literally.

“The pinnacle of it was Madison Square Garden in 1984,” Jackson told the Times Colonist in 2016, “which pulled about 8,000 people.” But this iconoclast’s iconoclast wasn’t celebrating the achievement. “A lot of people were congratulating me, saying, ‘You’ve made it,'” Jackson added, “and I was thinking: ‘Get me out of here.’ I hated it.”

Watch Joe Jackson’s Video for ‘Breaking Us in Two’

He proceeded to dive deeper still into this LP’s jazzier elements on the subsequent Body and Soul, bringing in bright brass and even deeper subject matter, and then placing it all behind a smoky album cover that deftly played off 1957’s Sonny Rollins, Vol. 2. In keeping, his commercial momentum began to dissipate. Still, in Jackson’s mind, all of this made thematic sense.

“I think that the thread going through it is just me,” he told Alan Sculley in 2001. “It’s my personality and my voice and putting different elements together. I think you just see different sides of it on different albums.”

Unfortunately, there were still those who pined for the lean post-punk joys of Look Sharp! and 1979’s I’m the Man. Those days, however, were long past – and, for Jackson, happily so.

“Believe it or not, I’m still getting reviews where people call me the angry young man of British new wave,” he told the Times in 1982. “People latch on to one image so they don’t have to think, and that kind of laziness has come to characterize the whole music scene these days.”