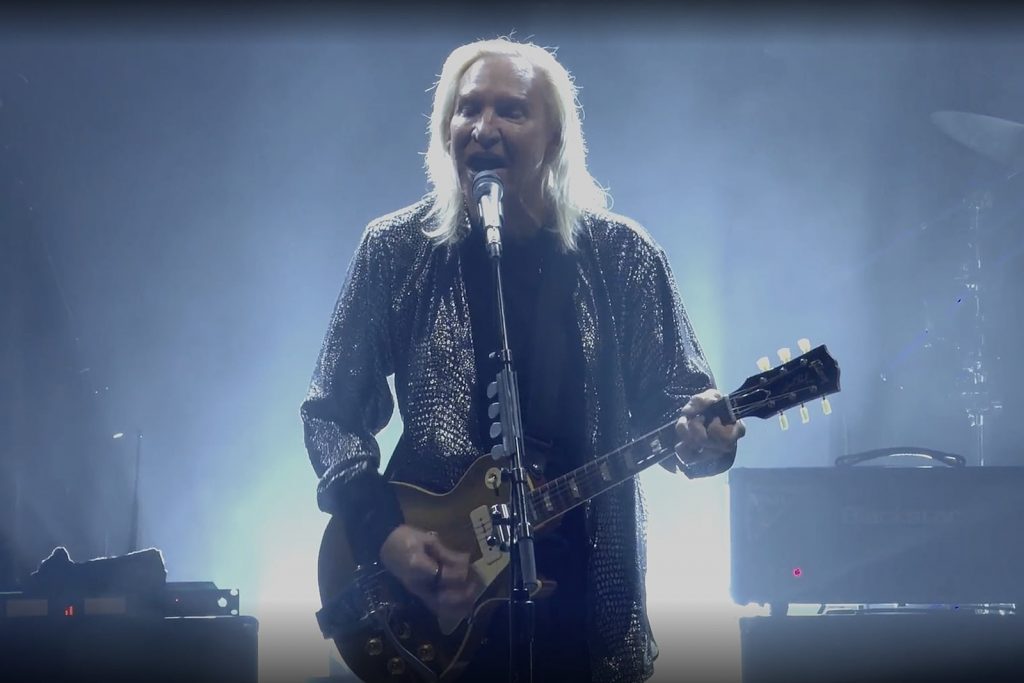 Prior to taking the stage, a video of Walsh was played, in which the guitarist spoke about the origins of VetsAid. Walsh’s own father, a flight instructor in the United States Air Force, died in a plane crash in Okinawa in 1949, when Walsh was only two years old.

“It hurts. It still hurts,” Walsh said. “And I spent my life wondering what he was like, what my life would have been like…He’s my hero and I’ve kind of based my whole life on: I want him to be proud of me.”

Walsh played four songs in total to close out the evening: “In the City,” “Turn to Stone,” “Life’s Been Good” and “Rocky Mountain Way.” He was joined for several songs by Grohl, who played both guitar and drums, as well as the Breeders, who sang backing vocals during “Rocky Mountain Way.” Walsh was also joined by his godson, Roy Orbison III, the grandson of the legendary singer.

“Music is very healing. If people come to a concert, they come home different. Luckily I’m in a position with my music background to do some healing,” Walsh said. “I guess this is my way of healing myself maybe.”

Earlier in the evening, Walsh, who lived in Ohio in his youth and attended Kent State University, reunited with his former band James Gang, which he joined after college. The rebooted lineup featured Walsh, Jimmy Fox and Dale Peters, all of whom played on 1970’s James Gang Rides Again, which spawned the hit “Funk #49.”

The reunited James Gang previously performed, with help from Grohl, at the Taylor Hawkins Tribute Concerts in London and Los Angeles, their first gigs since 2006.

“It all started in Ohio,” Walsh said in a statement regarding his Buckeye State musical roots. “Picking up my first guitar as a kid in Columbus set me on a musical journey to Kent State, Cleveland and then the world. Now it is a great privilege and humbling opportunity for me to share the stage once again with my original James Gang buddies and with this absolutely incredible group of Ohio rock legends like Trent Reznor and Nine Inch Nails, the Black Keys, the Breeders and Dave Grohl. I believe in Ohio and look forward to celebrating our musical legacy while honoring our veterans with VetsAid 2022.”

Walsh founded VetsAid, the nonprofit organization and music festival, in 2017 to raise and disperse funds to veterans’ groups across the United States. A VetsAid livestream is available to purchase on the Veeps website for $19.99, and buyers can re-watch for 48 hours after the event begins. Fans who wish to support the organization can also make donations at the VetsAid website.

Here’s a look back at studio projects recorded away from the band.