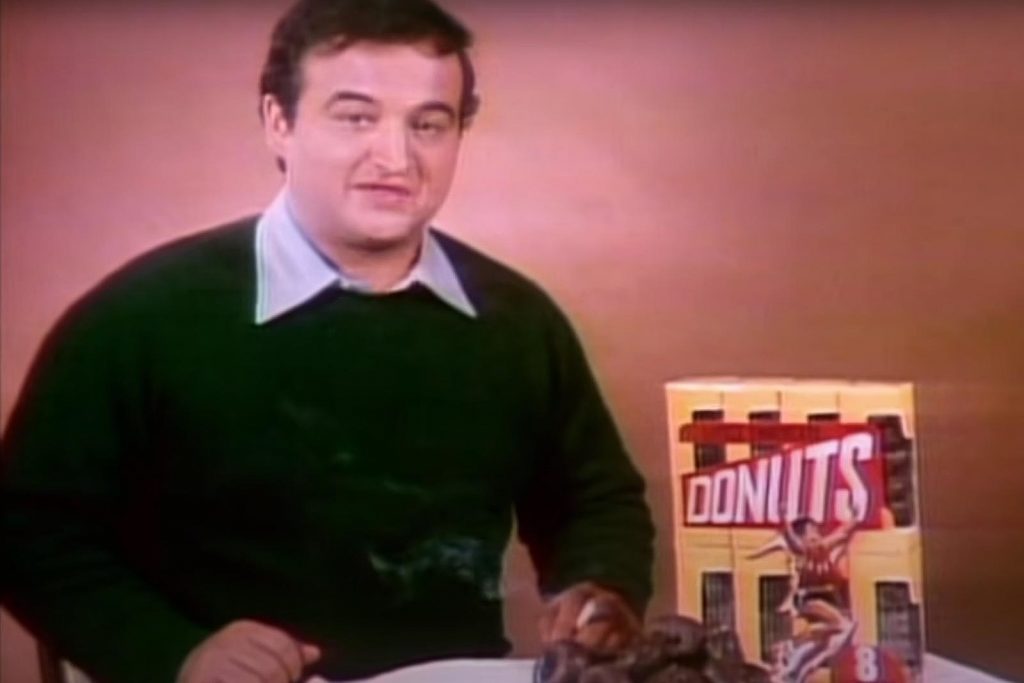 Saturday Night Live star Amy Poehler is quoted as saying, “Vanity is the death of comedy.” It’s a philosophy traditionally adopted by anyone seeking SNL breakout stardom, as it’s often the show’s broadest and most outrageous ideas that become fan favorites, regardless of —or perhaps because of — how it thrusts cast members’ guts, butts and other body parts right into the camera lens.

For some SNL stars, it takes a little convincing.

With the country flush with post-Olympics fever, the Nov. 19, 1977, episode of Saturday Night Live featured a commercial parodying then ubiquitous decathlon-winner-turned-TV-pitchman Bruce Jenner.

With an uncredited New York Knicks broadcaster Marv Albert lending his well-known pipes to a breathless play-by-play of an unstoppable American athlete trouncing his peers in everything from long-distance running to a mighty high jump, the camera lovingly presents none other than John Belushi as the ad’s perfect Olympic specimen. The joke of the piece, written by Al Franken and Tom Davis (who appears as the hapless Russian runner being bested by Belushi) is, well, that’s it’s John Belushi. Kitted out in a form-hugging sleeveless “U.S.A.” T-shirt and gym shorts, Belushi’s sprint victory sees him determinedly powering down the track, while his more traditionally in-shape competitors hilariously appear to be running in place. His powerful leap over the high bar comes via a suspiciously deft low-angle edit, the burly Belushi clearing a bar that could be anywhere from 10 feet to 10 inches from the ground.

The commercial is for Belushi’s recommended breakfast of “Little Chocolate Donuts,” which parodies Jenner’s then-current promotion of General Mills’ supposedly athlete-favored Wheaties. Belushi eventually is revealed scarfing one down while unconcernedly smoking a morning cigarette.

Directed by longtime SNL filmmaker and ad-parody expert James Signorelli, the commercial is a droll little masterpiece of corporate mockery. Belushi plays his role straight, the ad presenting the infamously substance-fueled comic as the unstoppable athletic figure who’d be chosen to hawk questionably nutritious products to kids. Belushi, a former high school athlete who’d captained both his Wheaton, Ill., school’s football and wrestling teams, was, by the time he’d become a household name on SNL, transitioned into the beefy, bacchanalian bad boy of comedy. And while Belushi often showed off a shocking nimble physicality in his onstage (and eventually onscreen) work, his bulk was firmly part of his comic persona.

Still, as noted by close friend and comedy partner Dan Aykroyd in Tom Shales and James Andrew Miller’s oral history of the show, Live From New York, Belushi wasn’t always keen to display his body for a laugh. “His vanity sort of got in the way there,” notes Aykroyd, explaining that Belushi had to be talked into making the long trip up to the upstate New York college where the Olympic scenes would be shot. He was ultimately convinced, with Aykroyd explaining his thought process in accepting such potentially unflattering roles as, “Well, it may not make me look great, or it is not my humor, but this is going to work and it is going to be funny.” (Indeed, Doug Hill and Jeff Weingrad’s seminal book on the early days of SNL, Saturday Night, relates an episode in which all the notoriously macho male cast members balked at playing a scantily clad male pedestrian who’d be catcalled by a gaggle of crude female construction workers, with Aykroyd only reluctantly stepping into the denim cutoffs the sketch required.)

And the piece is funny, the exaggerated exertion on Belushi’s face and his subsequent exhausted but triumphant post-race stagger (complete with Jenner-esque flag wave for the cameras) contrasting with the visual joke that he’s John Belushi. As Signorelli adds in Live From New York, Belushi was “feeling his oats” as one of the biggest stars on the show, not only having to be cajoled into performing the sketch in the first place but petulantly acting out once the cast and crew were in place. As Signorelli tells it, Belushi, after insisting on doing what he referred to as “the stunt” of leaping the high bar (actually a mere two feet off the ground and surrounded with a landing pad of cardboard boxes and blankets), feigned being injured, screaming out “melodramatically” for an ambulance before being coaxed back to work.

Even the relatively safe and sedate segment with Belushi eating and smoking while extolling the virtues of Little Chocolate Donuts as part of a healthy breakfast was a trial, as Belushi insisted on picking out his own wardrobe. As Signorelli explains, it really was Belushi’s own wardrobe, consisting of a bulky green sweater complete with a conspicuous moth hole in the front. Noting how the whole premise hinged upon aping Jenner’s natty and athletic self-promoting style, Signorelli was stonewalled by Belushi, ultimately only succeeding in getting the star to turn the sweater backward so that the moth hole is hidden. “If you look at it again, you’ll see he’s wearing the sweater backwards,” noted an amused Signorelli, whose contributions to Saturday Night Live spanned more than 35 years and 400 episodes until leaving in 2011.

As far as Belushi’s legacy goes, “Little Chocolate Donuts” is remembered with great fondness and affection, the spot doing more to burnish Belushi’s rising reputation as a fearless, down-for-anything performer and irresistible comic force than serve as a vehicle for mockery. Belushi’s appetites were part of that image at that stage in his career, with the show regularly leaning into the idea that he was an indestructible comedy cannonball, cartwheeling as Jake Blues or hurling himself off of his “Weekend Update” chair in a rage. Belushi sadly proved far from indestructible as it turned out, with the comic’s excesses eventually catching up to him when he died of an overdose at the age of 33.