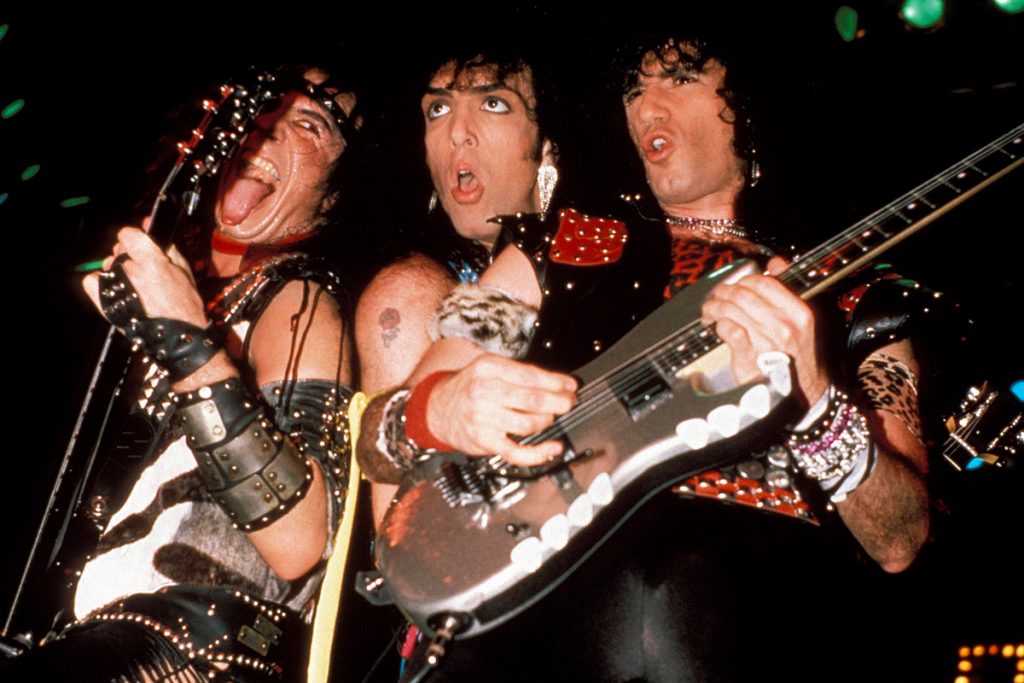 Bruce Kulick‘s second official day as a member of Kiss was far from an average one.

The night after he signed a contract to become the band’s fourth lead guitarist in just over two years, Kiss performed a show at Detroit’s Cobo Arena that was broadcast live on local radio, taped for an MTV special and eventually released as their first-ever live home video, Animalize Live Uncensored.

“I was nervous, but it was a thrilling time for me to be the new guitarist of Kiss,” Kulick tells UCR. “I was very excited for the world to finally see me with the band. It was a very strange period for them, going from Ace [Frehley] to Vinnie [Vincent] to Mark St. John to me in such short order.”

Oddly, one of the biggest legends in R&B music was there to help him prepare for the show. “I remember one thing that blew my mind. Diana Ross was backstage, since she was friends with Gene [Simmons]. She helped me tie the shoelaces on my red Reebok sneakers. I was like, WOW!!!!”

Luckily, it wasn’t the first time Kulick had shared the stage with Simmons, Paul Stanley and Eric Carr. He’d been performing as a temporary member of the group since the September 1984 start of their tour in support of that year’s Animalize album, filling in for St. John, who had developed a rare arthritic condition that kept him from playing guitar.

Medical issues weren’t the only thing putting St. John’s brand-new job with Kiss in jeopardy. Almost as soon as he joined the band, creative differences sprung up between him, Stanley and Simmons. “During the making of Animalize I sent him home one night to come up with a solo to one of the songs,” Stanley told Guitar World. “And the next day he came back and played me something that was at least a start. Then I said, ‘Play it again.’ And he said, ‘I can’t.’ The guy could never play the same thing twice, because he was just puking notes. There was no structure to any of it.”

Kiss wound up calling in Kulick to contribute guitar solos for two songs on Animalize, “Lonely is the Hunter” and “Murder in High Heels.” “Paul told me that he wanted me to play competitively with everybody that’s out there now,” Kulick told UCR about his time with the band in a previous interview. “Van Halen has been famous for four or five years right?  He wanted me to be able to do it all, and I know he had the right guy. I got what he meant. If the song meant do the finger-tapping, do the whammy bar, go! Do it! If it meant just lay back and hold that one note, do that.”

“I had respect for Mark St. John,” he continued, “and I was very shocked they chose him [as their new guitarist], because he was into Allan Holdsworth, a brilliant guitar player. He was into John McLaughlin. He was into these more very fusion-jazz shredders, that I was like, ‘That’s not Kiss!’”

With the band having quickly grown comfortable with Kulick’s playing style and personality during their two months of touring together, St. John was dismissed after performing just one full show and parts of two others in late November. “I remember it like this,” Kulick explains. “The first show Mark played he may have started the show, I finished it. Next show he did the other half of a show. Last one in Binghamton, N.Y., he did the entire show. And they knew they wanted me when that gig was done. They sent him home, and the question of who would be in the band was decided.”

Kulick can’t recall exactly when he was told about the live recording, and says there wasn’t any discussion about altering their performance or playing to the cameras. “It was 1984, remember that. Video was very new, we were just trying to capture the band in action.”

Kulick would finally bring stability to Kiss’ lead guitarist position, staying with the group for 12 years and five successful studio albums, until they put their makeup back on and reunited with founding members Frehley and Peter Criss in 1996.

In 2019, Kulick time-traveled back to his first tour with Kiss by playing a medley of six Animalize songs with his solo band aboard the ninth annual Kiss Kruise. “Revisiting that album showed me how powerful the music was that Kiss was creating back then,” he raves. “Fast catchy riffs, huge drums, and big chunky guitar rhythms. It was really fun for Todd [Kerns], Zach [Throne], Brent [Fitz] and I to dig into the songs and that era again, after 35 years!”