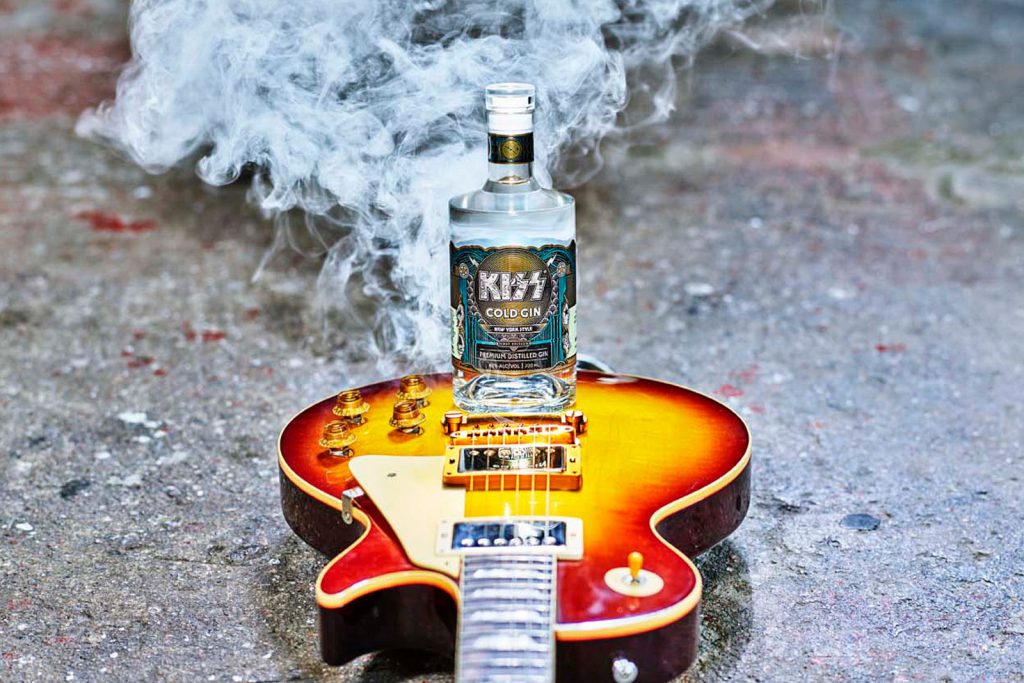 Kiss released the classic “Cold Gin” close to 50 years ago — and yet, there hasn’t been an official gin from the New York-bred legends until now.

Arriving as the fourth installment in the Drink It Up by Kiss series, the group’s latest spirit, Kiss Cold Gin, is a potent blend featuring hints of juniper, citrus and herbs, lemon peel and angelica root.

“Now it really is ‘Cold Gin time,'” co-bandleader Paul Stanley quipped in an official statement. “If gin is your thing, then this is the one to bring. Like the song, this one’s a classic!”

Stanley and Gene Simmons both worked closely with Brands for Fans on the gin. “They’re very thorough when it comes to the design,” Andreas Werling shared during a recent conversation with UCR. “It took quite a while to do it, but it turned out really good and they’re really happy with it as well.”

Werling personally designed the bottle’s label and beamed with pride during a Zoom interview, detailing some of the “Easter eggs” built into the illustration. The drink is distilled five times to match the intensity of the legendary group. “This is the hottest band in the world and they’re big and bombastic,” he adds. “That’s how we wanted Kiss Cold Gin to taste.”

Werling shared additional insights regarding the development during his interview with UCR.

It’s unbelievable that it’s taken this long for Kiss to have their own “cold gin.”
It was such an honor to do it. We really put a lot of effort into it. Because we knew, it’s been since 1974 when the song was released, it’s never been done. They’ve done a lot of licensed items, but never cold gin. Even if you’re not a diehard Kiss fan, you’ll see when you hold the bottle, that there’s a lot of love and attention that’s put into it.

Yeah, the label on the bottle itself, it seems like you had fun building in some Easter eggs for fans to discover.
You know, the band’s origins, they are from New York, basically. So the creative process was basically, “How can I make it have a genuine New York vibe, but also have it be the most genuine Kiss product?” The idea was to try to make something that you would love to put on your shelf, but also something that’s appealing enough to drink and buy another one.

Because it is a fantastic liquid. We do the blends ourselves. It’s nothing that we buy in bulk. So the creative process was to get as much Kiss for the fans as possible. I put a lot of history into the label as well. For instance, on the label, there’s a clock that’s directed to 10:11, but in military time, 11 would be 23.

So it’s actually 10 East 23rd Street. And that very clock face I also based on a clock that’s very, very close to that address. If you’re a Kiss fan, you know exactly what that address means.

I’m a bit of a lightweight. How should I drink this stuff?
It works great with a regular gin and tonic, obviously. But also, we have a fantastic mixologist in Los Angeles who has done a sling [cocktail], which is an amazing way of drinking it as well. Even drinking it straight, some people prefer that too. I would say, before you sip it, just open it up and smell it. Have a little sip of it straight, even if you’re not a straight drinker, and just feel it. But I would say a regular gin and tonic would be great to start with. It works with a lot of different cocktails.

When did you first discover Kiss as a music fan?
I started listening to Kiss when I was 6 years old. I would consider myself a diehard fan, to be honest. I was born in the late ’80s, so I got Destroyer on CD, obviously. The combination of rock ‘n’ roll music with, basically, superheroes, was something that just blew my mind when I was a kid.

You must have been pretty thrilled the first time you saw the band live.
First and foremost, I was a kid then, but seeing them for the first time, I would imagine it’s like my own kids going to Disneyland and seeing Superman or something. It’s out of this world. I mean, still to this day, amazing live acts like Rammstein, who have really explosive live shows, they’re obviously fantastic to see.

But there’s something about Kiss. It’s just the theatrics and the pyrotechnics that they use. Paul hanging from the sling and going out into the audience. I mean, it’s more than a concert. It’s like watching an action movie, but it’s actually a rock show. It’s fantastic.

You’ve done these different spirits with Kiss and also worked with other bands in the past like Motorhead. Are there other similar band collaborations on the way?
Ozzy Osbourne, we just released the Ultimate Gin, which is of course [a play on] The Ultimate Sin. That was released in Europe, and it’s amazing to be able to do something with Ozzy. We’re about to actually release two gins with Def Leppard, which is coming later this year. We’re really looking forward to that.

Listen to ‘Cold Gin’ by Kiss