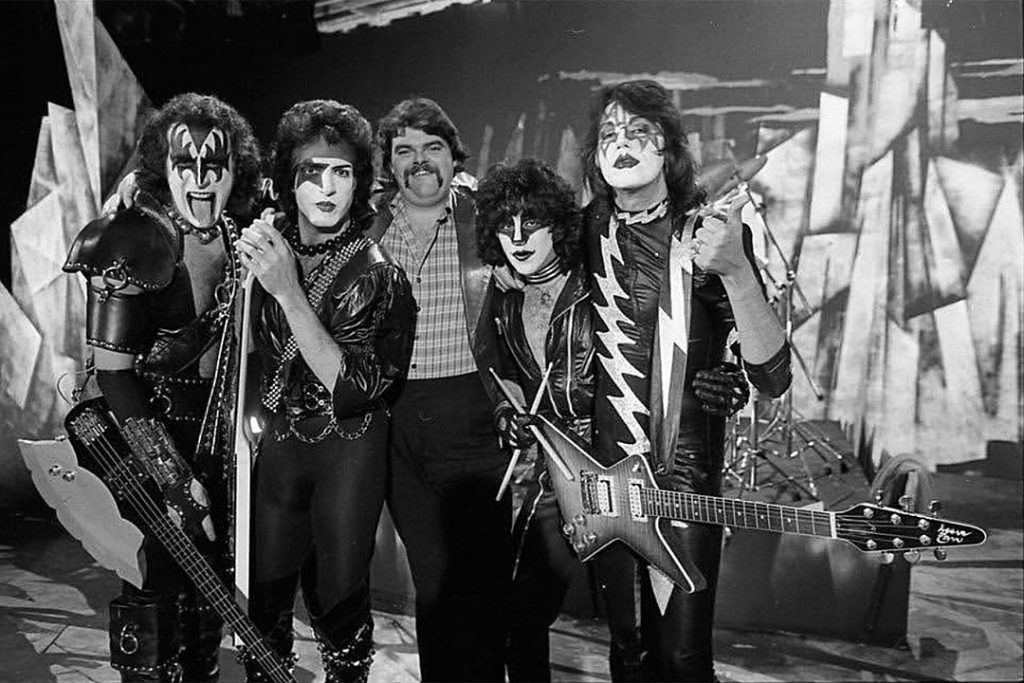 Current and former members of Kiss paid tribute to onetime bodyguard John Harte, who worked with the band at the height of its fame.

From the mid-’70s, Harte – known as “Big John” – helped protect the safety and identity of the musicians who didn’t officially reveal their faces until 1983 before going on to work with Iron Maiden, Billy Idol and Prince. He died at the age of 70 on Feb. 11 after a cancer battle. Confirming his death, podcaster Mike Brunn reported: “As many fans know, John was Kiss’ bodyguard during the ’70s and was photographed trying to help band members conceal their identities.”

Guitarist Paul Stanley said the news was “very sad,” tweeting that “‘Big John’ Harte was with us from the beginning and has always been family. He fought valiantly and relentlessly against cancer, and I was thankful to be able to cheer him on. He remains a legend in Kissworld. My condolences to MaryAnne and Brian.” Bassist Gene Simmons wrote: “Rest in peace, John Harte. A wonderful man. … Our prayers and condolences to his family.”

“He was my bodyguard and very good friend!” former guitarist Ace Frehley said on Facebook. “He saved my life more than once! Wish I could have saved him. … Over the years we always stayed in touch, even after I left Kiss.” Describing Hart as someone who was “loved and respected by many in the music business,” he concluded: “A very sad loss! I’m destroyed!”

Maiden drummer Nicko McBrain told Broadway World that Harte “had worked with us for several years, and I recently had a great visit with him, laughing and sharing stories together. A great guy and valued member of the family who will be sadly missed!” The outlet also reported that Harte had been working on a memoir, which will be completed by co-author Robert V. Conte and published next year.

Speaking in 2018, Harte told Michael Cavacini: “I was brought in to work with [Kiss] in January 1976. We went to Europe, and I assumed after that tour my commitment was over. Then [manager] Bill Aucoin asked me to stay with the band, and it became an eight- or nine-year relationship.” He said he moved on in 1983 after a management change meant he wasn’t required permanently. “I took them to Brazil, set them up for the first show. And then I left to go work with Iron Maiden.”

Harte said he didn’t break as many press cameras as people seemed to think. “We tried to be more level-headed than smashing them,” he noted. “We’d warn photographers, ‘Don’t take any pictures.’ Of course, someone would always try and they’d get caught. Then I’d get in their face and say, ‘I need to have the film.’ Some people would give it over, and others would try not to. If they really resisted, I’d say, ‘One way or another, I’m going to have that film. It’s your camera, but I will get that film out of there.’ They’d usually give me their cameras, and I’d strip the film right in front of them. … I’d hate it when they’d run away because I’d have to go chase them down, and I’m a big guy.” He confirmed the photographers were paid for the film he recovered. “The band thought it was only fair to do that. I’d give them $5 or $10, whatever it cost for the film back then. It usually helped resolve those situations more quickly.”

Of his security duties, Harte recalled that “we did have some people threaten multiple times to kill band members. We had people open the band’s mail at the office. … Once there were four or five threats from a person, we had to call up the FBI, especially if we were going to be in the area in which they lived. Most of the time it was lovers’ quarrels, though. A girl would be into Paul, and her boyfriend or husband would get jealous. Stuff like that.”