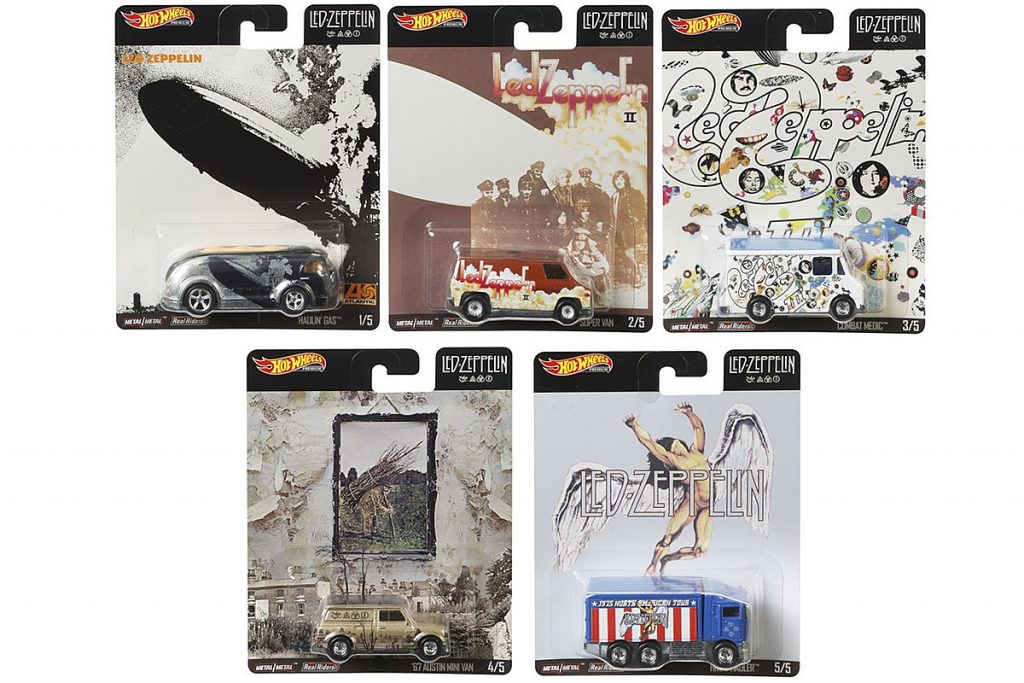 Led Zeppelin‘s upcoming entry into the Hot Wheels Pop Culture Collection is a tailor-made stocking stuffer for all your “Friends.”

Five collectible die-cast vehicles inspired by the group’s career are set for release this month. Each will be be themed after a specific time period. See them all below.

“Haulin’ Gas” is a late-’60s tour bus in black and silver, with the iconic Hindenburg disaster from Led Zeppelin’s eponymous debut painted on the side. “Super Van” is reminiscent of the old-school Hot Wheels Real Riders, with the band’s name in a pink font and the smoke from Led Zeppelin II on each side. The rear is emblazoned with the LP’s nickname, “The Brown Bomber,” and a vanity license plate reading “LOTALUV” that nods to “Whole Lotta Love.”

The third of the vehicles is “Combat Medic,” a white van with the trippy artwork from Led Zeppelin III on the sides. The fourth entry is the “’67 Austin Mini Van,” with Led Zeppelin’s untitled fourth album in mind. It’s all gold with the cityscape from the record’s cover on either side. The four symbols that represent each band member are affixed to the top panels.

The final entry in the series doesn’t focus on the group’s catalog, but rather their 1975 North American tour. The sides of the touring truck invoke the American flag, with stripes and stars in red, white and blue. The Swan Song logo is on each side of the “Hiway Hauler,” with an overlay of the best-known Led Zeppelin font. The fuel tanks include an incredible detail: all the cities visited on the ’75 trek.

Each of the vehicles, which are 1:64 scale models, come with a backing card that shows the corresponding album cover – save for “Hiway Hauler,” which features the Swan Song image in full color. All have the four symbols in the top right and Hot Wheels Premium on the top left. The backs of the cards show the vehicles available in the series, which are sold separately by Hot Wheels’ parent company Mattel and not for children under the age of three. That probably won’t matter, as we envision lots of adults hoarding these wheels for themselves.

Hot Wheels has previously given a similar treatment to The Grateful Dead and The Beatles. Some of the pre-order sites are calling the Led Zeppelin series “Mix 1,” which perhaps indicates that the rest of the catalog might be acknowledged down the road.