Leonard Cohen, a Journey, a Song’ Debuts in New York 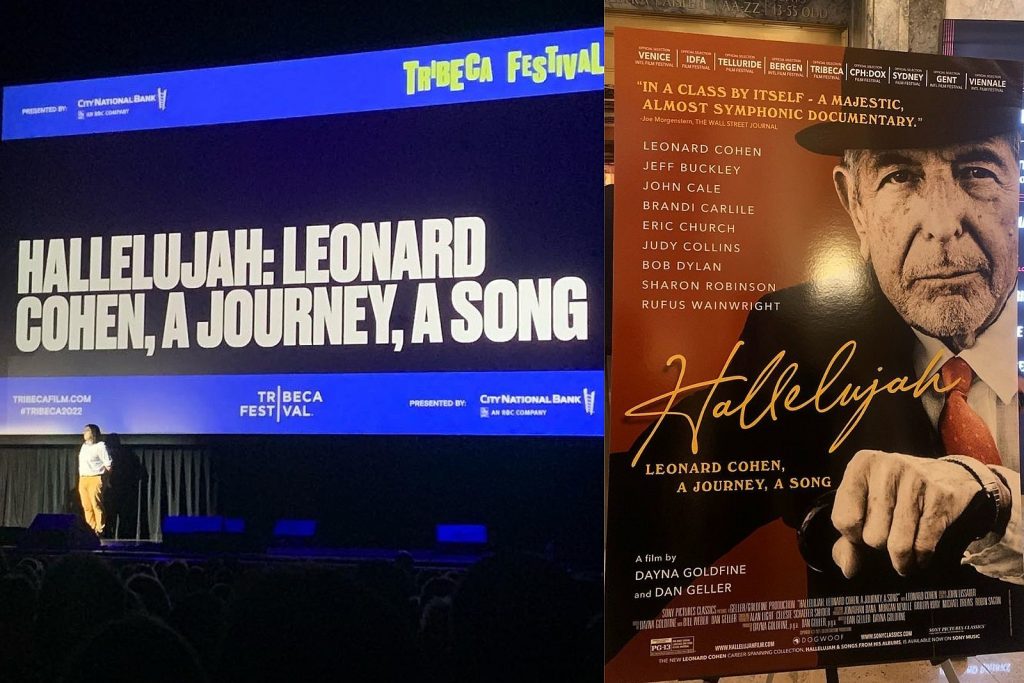 In the new movie Hallelujah: Leonard Cohen, a Journey, a Song, the singer-songwriter – in an archival interview – jokes that his posthumous career will be larger than the one he had when he was alive.

In many ways, this has held for Cohen, who died in 2016 at the age of 82. When he first arrived on the songwriting scene in the latter half of the ’60s, he was 32, not exactly the age most artists choose to enter the music industry. His work was sometimes misunderstood or deemed too dark, his lyrics frequently addressing matters that were considered controversial for the time, including sexuality, war and religion. Cohen’s career fluctuated over the years, artistically and financially — in 2008, he embarked on a 15-year tour to recoup the funds his former manager had stolen from him. It was considered a remarkable comeback. “Courage is what others can’t see,” he says in the film.

That courage is on display in Hallelujah: Leonard Cohen, a Journey, a Song, which Cohen approved in 2014, just before his 80th birthday. The film premiered at the Tribeca Film Festival in New York last night. A larger rollout will follow this summer. Several Cohen contemporaries and fans attended the screening and performed some of his songs. Judy Collins, an early champion of Cohen’s, sang a sweet rendition of “Suzanne,” which she first covered on her 1966 album, In My Life. Amanda Shires sang a stirring version of “I’m Your Man,” while Daniel Seavy performed “Hallelujah.”

You can see photos from the event below.

The movie, which is based on Alan Light’s book The Holy or the Broken: Leonard Cohen, Jeff Buckley & the Unlikely Ascent of Hallelujah, expounds on Cohen’s life and career, with a specific focus on how “Hallelujah” grew from a poem to one of the most covered songs of the 21st century. The film incorporates recent interviews with former Rolling Stone writer Larry “Ratso” Sloman, who produced “Hallelujah,” John Lissauer, A&R executive Clive Davis and several of the artists who have covered the song, including Brandi Carlile, Eric Church, Rufus Wainwright and Regina Spektor.

As Hallelujah: Leonard Cohen, a Journey, a Song emphasizes, the song wasn’t always held in such high esteem. It first appeared on Cohen’s 1984 album Various Positions, which for years was unreleased in the U.S. The decision was made by CBS Records President Walter Yetnikoff, who told Cohen: “Look, Leonard, we know you’re great, but we don’t know if you’re any good.”

Others recognized “Hallelujah”‘s draw from the start. Bob Dylan covered the song during tours in the late ’80s and once said about Various Positions: “These are more than songs. These are prayers.” John Cale recorded a stark version for a 1991 Cohen tribute album, I’m Your Fan. And Jeff Buckley recorded the most heralded cover on his 1994 debut, Grace. “It’s a great song,” Buckley says in the movie. “I wish I wrote it.” By the time the song appeared in 2001’s Shrek, “Hallelujah” was the hit it was never destined to become. As Cohen says, “Perseverance is the essential element.”

Hallelujah: Leonard Cohen, a Journey, a Song touches on merely the chapter points of Cohen’s life: his upbringing in Quebec, years practicing Buddhism in a Californian monastery, romantic endeavors and muses But his story and impact are may be best described through the lens of “Hallelujah,” a song that’s as holy as it is secular, as ethereal as it is grounding, as hopeful as it is heartbroken.

That pretty much sums up Cohen, too.  “You look around and you see a world that is impenetrable,” he says at the end of the film. “You either raise your fist or you say ‘hallelujah.’ I try to do both.”