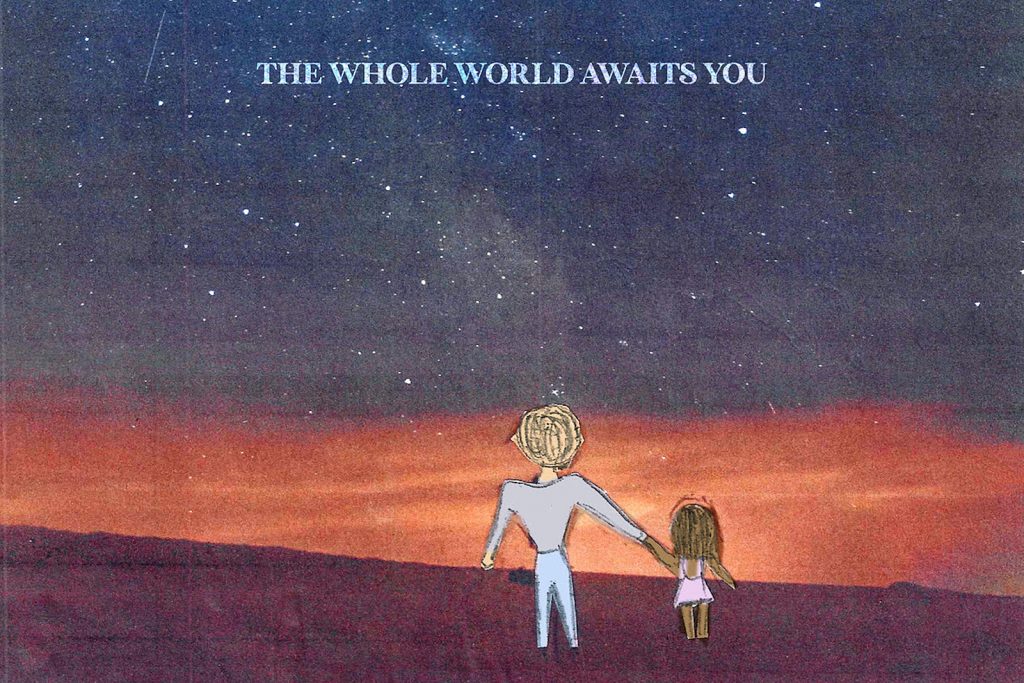 But now the spotlight turns on him as he releases his third solo album, The Whole World Awaits You, a 12-track set coproduced by Van Zandt that arrives today.

Even though he had originally planned on releasing the record not long after his last one came out in 2008, several side projects, including recruitment into the Disciples of Soul, led Ribler down different paths. It took the pandemic to give him time to put together the new LP. He had a range of material to work with; some songs were written more than a decade ago, some were written during the lockdown. The Whole World Awaits You encapsulates much of the post-pandemic optimism the world is now feeling, even if many of the songs, like the title track, were conceived years ago.

“I find a lot of times as a writer and an artist, sometimes you plug into things going on upstairs,” he tells UCR. “You strive for that, but you can’t plan it. It just it happens when it happens. And when it does, it’s magical.”

Songs on the album also stretch out, ranging from straight-up rock ‘n’ roll to introspective ballads like “Fly Away,” which highlights Ribler’s west coast influences with a 12-string Rickenbacker that recalls both the Byrds and Tom Petty. Even though he was born in Brooklyn and spent most of his teen years in New Jersey, Ribler grew up with the sounds of southern California on the radio. Eagles, Crosby, Stills, Nash & Young and Jackson Browne were a regular part of his musical upbringing.

“It just enters your DNA as a kid starting to play music,” he notes. “It’s funny how, as I get older, it comes out in some kind of pure form. I’m a student of the history of rock and roll.”

Much of Ribler’s career has involved songwriting for other artists, movies and commercials, which requires some investigating before the writing actually begins. “I would need to figure out what their vocal range is, what topics they write about,” he explains. “You need to kind of study up a little bit before you dive into writing a song for the person.”

But when he works on songs for himself, he takes more time. “I don’t necessarily have deadlines or I don’t have an agenda, it’s much more open,” he says. “I think I just let the muse direct what something wants to be on any given day. Not that writing a song for another person is not a spontaneous and organic experience, but I just like to give myself freedom to not have to fit within certain guidelines. Keep it out of the box.”

A good example of that creative liberty can be heard in the final track Ribler wrote for his new album, the Latin-infused “Manzanillo.” Prompted by Van Zandt, Ribler recorded and constructed the track remotely due to the lockdown, and tapped into a sense of optimism with a fitting metaphor.

“When Steven asked me to write a song, I was just looking at the world,” he explains. “You can look at as being in the same place that the Roman Empire was or the Aztec empire or the Mayan Empire — they had amassed such riches, and, because of their greed and quest for more and more power, they destroyed themselves. I was just seeing our country as being in the throes of this tremendous change and emotional upheaval, and like every dark part of our fabric and the illness that exists under the surface, everything is coming up. And it’s like this is an opportunity to go to a higher place and let history teach us.”

Van Zandt also contributed to the LP’s closing track, “This Is How the Song Goes,” which leaves room for whatever is next. “We didn’t know that would be the last song on the record,” Ribler notes. “I had most of it arranged, but Steven brought a few really great things to the table, and at the end of the song he said, ‘Try to come up with something where it’s like it keeps going, it keeps lifting, it keeps accelerating.'”

Ribler’s collaborations with Van Zandt are piling up — he’s produced several Disciples of Soul albums — as they’ve built a level of trust that makes working together easy. “We’ve always had a similar purpose in every musical project that we worked in, not together, but separately, in that he was the guy that Bruce always leaned on to make sure that he had the right band and the productions were sounding right,” Ribler notes.

As a kid, he met the E Street Band a few times in clubs, but he didn’t professionally connect with Van Zandt until the guitarist invited Ribler to work with him on a Darlene Love album. Ribler showed up for what was supposed to be a three-hour session — he stayed for 10. “I guess he really saw how much care and how much integrity I intended to have about it about,” he says.

Looking forward, Ribler hopes to tour behind The Whole World Awaits You, especially after the past year’s pandemic shutdown. “I’d really like to be touring my music, this record and music that I’ve been working on for the future,” he says, “and somehow, affect people’s lives in a positive way.”