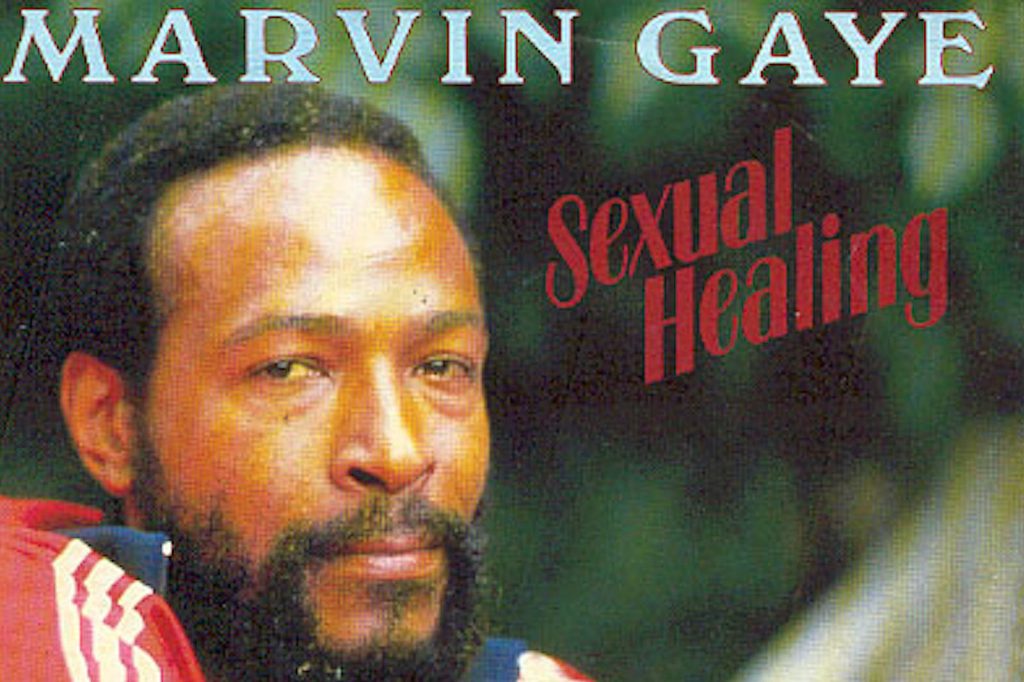 Marvin Gaye was carrying a heavy burden toward the end of 1981.

A rough-draft master tape for Gaye’s 16th studio album, In Our Lifetime?, was stolen by his bassist Frank Blair the previous autumn and brought to Motown Records, with whom Gaye was signed. The label edited, mixed and released the album on Jan. 15, 1981, all reportedly without Gaye’s consent or input.

The incident upset Gaye and fractured his trust in the company. “Can you imagine saying to an artist, say, Picasso, ‘OK, Pablo, you’ve been fooling with this picture long enough. We’ll take this unfinished canvas and add a leg here, an arm there’?” Gaye would later lament in Divided Soul: The Life of Marvin Gaye. “‘You might be the artist, but you’re behind schedule, so we’ll finish this painting for you. If you don’t like the results, Pablo, baby, that’s tough!’

“I was heartbroken. I was deeply hurt,” Gaye added. “Motown went behind my back. That’s something I’ll never forgive or forget.” He vowed not to record for Motown any longer.

On top of that, Gaye was dealing with IRS complications, the end of his second marriage and his struggles with substance abuse. Gaye relocated to Ostend, Belgium following a European tour in the winter of 1981, on the advice of a Belgian DJ friend named Freddy Cousaert.

Things slowly began to look up. Gaye signed a new deal with CBS, who offered to help him out of his debt predicament, plus a three-album contract, and he embarked on a highly successful tour of England in June 1981. By the time he returned to Ostend in July, Gaye was feeling considerably more confident.

Two musicians from Gaye’s touring band, Gordon Banks and Odell Brown, stayed on with Gaye in Ostend, where they began working on new music. The trio soon developed a reggae-style instrumental track using the newly launched Roland TR-808 drum machine — a tool that greatly appealed to Gaye since it meant he didn’t have to rely as heavily on outside musicians.

A strict rule had been put in place during this period: no music writers or press of any kind allowed: This was Gaye’s time to gather his thoughts, personally and professionally. Somehow, Rolling Stone‘s David Ritz arrived anyway, looking to speak with Gaye about a dual biography focusing on Gaye and Diana Ross.

Cousaert reportedly attempts to deter Ritz, to no avail. Finding Gaye’s apartment had been relatively easy, according to Gaye’s brother Frankie, who was present when Ritz showed up. “If Marvin wasn’t the only Black person in Ostend, he was certainly one of the very few,” Frankie wrote in Marvin Gaye, My Brother, “and word had gotten around that the American singer Marvin Gaye was living there.”

There are varying accounts of what happened next.

According to Ritz, Gaye specifically asked him to pen lyrics for the instrumental track. “On [Gaye’s] coffee table was an avant-garde, French sadomasochistic book, full of cartoon drawings of women who were sexually brutalized,” Ritz later told Songwriter Universe. “I told Marvin, ‘This is sick. What you need is sexual healing, being in love with one woman, where sex and love are joined instead of sexual perversity.’ Marvin liked the concept of sexual healing, so he asked me to write lyrics to go with this concept.

“As I was writing the lyric, I was trying to capture Marvin’s voice and style as a singer. He said, ‘That lyric sounds like me,'” Ritz added. “The lyric seemed to fit into his philosophical musings and his personal, emotional needs, so he could sing about it with complete honesty.”

Ritz claimed that he wrote most of the verse and chorus lyrics, while Gaye wrote the melody and bridge lyrics, with the whole thing taking roughly a half hour. Frankie, however, later argued that Ritz had not contributed to the lyric writing.

“Marvin played the tape over and over, saying ‘I pray to God it’s going to be a hit’ more than once,’ Frankie wrote. “He still hadn’t written any words to put to it. They just wouldn’t come to him, he said. At that point, Ritz commented, ‘Not only are you sexy, your music is healing.’ That was it. Ritz’s few words were said casually and in passing, but they stayed in Marvin’s head.”

Gordon Banks also remembered that day slightly differently, telling The Atlantic in 2012 that Ritz was only responsible for what would become the song’s title, “Sexual Healing.” Ritz and Gaye had been discussing the latter’s interest in Amsterdam’s Red Light District.

“David said to Marvin during a conversation, ‘It sounds like you need some sexual healing,'” Banks recalled. “And that was it. David didn’t have anything to do with that, but anyway Marvin ended up doing ‘Sexual Healing’ with [jazz musician] Odell [Brown]. Then Odell left and he only did the chords. Marvin put all of the other stuff into the song. He put guitar track after guitar track and the song developed into ‘Sexual Healing.'”

The results appeared on Midnight Love with Gaye and Brown as credited songwriters. Ritz was not mentioned as a composer, only thanked in the album’s liner notes: “Thank you to David Ritz, whose brilliant literary mind created the title ‘Sexual Healing.'” Ritz approached Gaye, who allegedly told him that Ritz couldn’t be credited due to contractual obligations with CBS. Gaye assured him he’d eventually be financially compensated for his contribution. Released in the fall of 1982, Midnight Love was a colossal comeback for Gaye, hitting the top of the charts around the world and earning him widespread critical praise, plus a pair of Grammy nominations.

“Sexual Healing” on its own was equally as successful: When the single peaked at No. 3 on the Hot 100, it made Gaye only the second artist in Billboard history to have a song peak at every spot from Nos. 1 through 10 on the chart. (Aretha Franklin was the first.)

“Sexual Healing” won both awards at the 1983 Grammys, Best Male R&B Vocal Performance and Best R&B Instrumental Performance, the only two Grammys Gaye would win during his lifetime. He moved back to the U.S. and launched what would become his final concert tour in April 1983.

Gaye’s impressive commercial success contrasted with his still-rocky personal life, as he continued to struggle with substance abuse. He grew increasingly paranoid and, according to a 1985 edition of Ebony that chronicled the last few years of Gaye’s life, hired heavy security for his tour and wore a bulletproof vest.

“By this time,” Gaye’s sister Zeola later told The Washington Post, “the addiction had taken a toll.”

Ritz later admitted that he was torn. He didn’t want to upset Gaye further, but also wanted to see his proper due for “Sexual Healing.” Ritz claimed he saw Gaye around this time at a hospital, where the Gaye family had gathered to celebrate the birth of Frankie Gaye’s child. Ritz described Gaye as acting “curt and dismissive” with him.

“That’s when I knew he wasn’t going to credit me on the song,” said Ritz, who decided to file a $15 million lawsuit for partial credit of the song. “He was served the suit before one of his concerts.”

As Frankie Gaye recalled, the legal action caused his brother “great distress.” Not long after, everything would come to a tragic head: Gaye intervened in a fight between his parents on April 1, 1984, a day before his 45th birthday, and was shot and killed by his father.

“The irony of it all was that Marvin never got the ‘healing’ he sang about in the song,” Ritz later said. The lawsuit was dropped after Gaye’s death, but Ritz was awarded partial songwriting credit. Ritz’s book, no longer a dual biography, was instead re-titled Divided Soul, and released in 1985. “He sang it beautifully, but he couldn’t quite live up [to] the message of the lyrics.” The point of “Sexual Healing,” however, may not have been Gaye’s recovery.