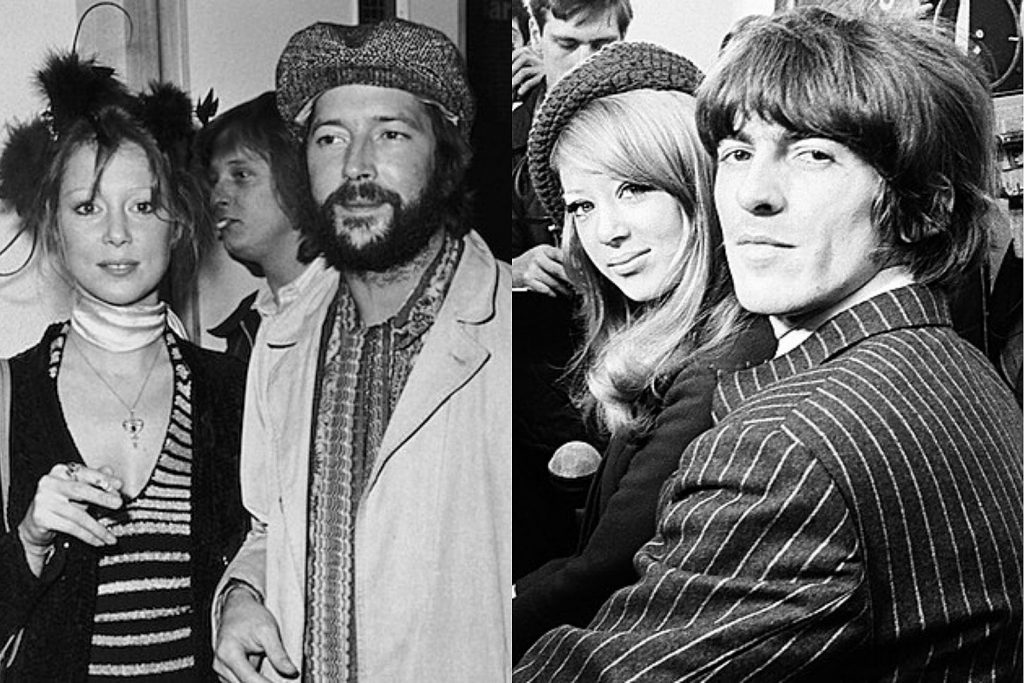 Pattie Boyd was rock music’s foremost muse. She was married to George Harrison and then to Eric Clapton, and both were inspired to write classic songs about her.

But before all that, Boyd was a fashion model in swinging ‘60s London and, alongside Twiggy and Jean Shrimpton. That’s how, at 19 years old in 1964, she found herself auditioning for a secret project that turned out to be the Beatles’ film A Hard Day’s Night.

That first day on set, Harrison asked her if she’d marry him or at least go to dinner, but she had a boyfriend and turned him down. When the two met again, she’d lost the boyfriend and soon began dating the Beatle.

Harrison memorialized on 1969’s “Something” and became Harrison’s first A-side single with the Beatles after it was released on Abbey Road. It made it to No. 1. In her memoir, Wonderful Tonight, Boyd wrote: “He told me, in a matter-of-fact way, that he had written it for me. I thought it was beautiful — and it turned out to be the most successful song he ever wrote, with more than 150 cover versions.”

Watch the Beatles’ ‘Something’ Video

Boyd left Harrison in 1974 after a series of his infidelities. “In India, George had become fascinated by the god Krishna,” Boyd wrote, “who was always surrounded by young maidens and came back wanting to be some kind of Krishna figure, a spiritual being with lots of concubines. He actually said so.”

She then moved on to Clapton, who played guitar on the Harrison-penned Beatles song “While My Guitar Gently Weeps” in 1968. Boyd noted the two musicians were close friends who played and wrote music together and that she was always aware of Clapton’s attraction to her. It was flattering, she wrote, and the kind of attention Harrison no longer paid to her. In 1970, Boyd and Clapton began seeing each other frequently. After a trip to Miami, Clapton returned with a pair of bell-bottom jeans as a gift. He also came back with “Bell Bottom Blues,” in which he proclaimed his love: “In your heart, I want to stay.”

Listen to Derek and the Dominoes’ ‘Bell Bottom Blues’

That song ended up on Derek and the Dominos‘ album but was quickly overshadowed by the LP’s title track: “Layla.” Boyd later recalled that Clapton played her the song several times a row in an empty flat where the band was recording. He was watching her face for reactions. It put her in an uncomfortable position, she said, but realized, “I could resist no longer.” At a party that evening, Harrison saw his wife talking to Clapton, who revealed he was in love with Boyd. Harrison was angry, but Boyd went home with her husband, and Clapton took solace in heroin.

After Boyd and Harrison split, Boyd and Clapton eventually married in 1979. But the union was fraught with alcoholism and infidelity, among other indiscretions. But it yielded another classic song inspired by Boyd: “Wonderful Tonight.”

Boyd recalled that she couldn’t decide what to wear one evening, throwing dress after dress on the floor as she tried them on. While she searched, Clapton was picking away at his guitar in the next room. Inspired by country singer and songwriter Don Williams, Clapton wanted to tell a story about everyday life. “Wonderful Tonight” reassured his wife that she looked wonderful, no matter what she decided to wear.

The songs became happy memories of her relationships with Harrison and Clapton. “I think in my case, both George and Eric had an inability to communicate their feelings through normal conversation,” Boyd once told Taylor Swift in Harper’s Bazaar. “I became a reflection for them.”

The Best Love Song From More Than 100 Rock Acts

Here’s rock at its most romantic, listed alphabetically.