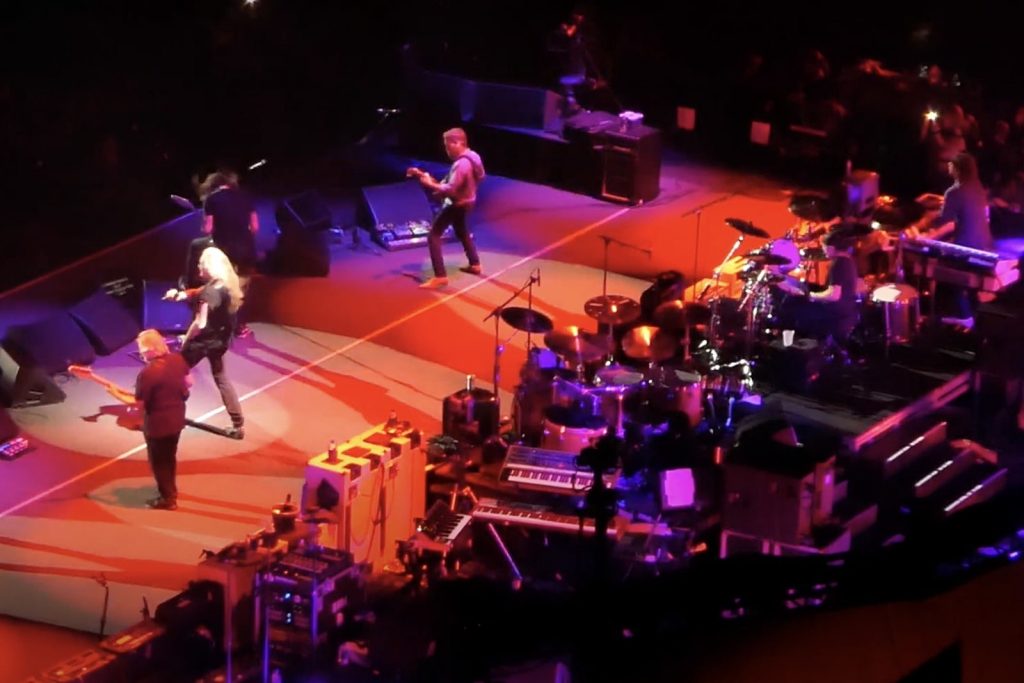 Dave Grohl introduced the trio in a customarily coy fashion. “We thought, ‘Why not bring out some of our real fuckin’ rock heroes?'” the bandleader said. “I got this guy, he’s a friend of mine, he plays drums sometimes. And I know this dude, kind of, who plays bass sometimes, and this dude who sings. So right now, let’s bring out Sebastian Bach, Geezer Butler from Black Sabbath and Lars Ulrich from Metallica!”

Bach brought his signature megawatt energy to the stage, goading the audience by shouting, “Los Angeles, are you ready to kick some fuckin’ ass?” From there, the supergroup, augmented by Foo Fighters, tore through Black Sabbath’s beloved Vol. 4 cut “Supernaut” and signature hit “Paranoid.”

They ended the latter song with a tag of Ronnie James Dio-era Sabbath classic “Heaven and Hell.”

Following the news of Hawkins’ death at age 50 in March, Bach shared an Instagram video of the two of them rocking out to Van Halen‘s “Everybody Wants Some!!” at a house party. “Rock ‘n’ roll is precious. Life is short. Good times are rare,” Bach captioned the post. “Thank you, Taylor Hawkins, for your rock ‘n’ roll life of giving us all good times.” Bach also shared the stage with Hawkins’ Chevy Metal during a November 2016 show to perform several classic rock covers.

Ulrich was also close with Hawkins, having hung out with the drummer when he and Grohl co-hosted the “Death on the Radio” world premiere of Metallica’s Death Magnetic in 2008, where they chatted with all four members about their new album. Following Hawkins’ death, Ulrich shared a photo of the two of them on Instagram with a touching caption. “Thank you, Taylor,” he wrote.

“Thank you for always having the biggest warmest smile on your face and for lighting up every room with your infectious energy and good vibes. … Your phone call a week ago touched and inspired me and I will always be appreciative for you championing our community as in your parting words … ‘Drummers stick together!’ Damn right, brother. Except now the community is lesser without you. Rest in Peace.”