Metallica, Elton John and Others Donate to Australia Fire Funds 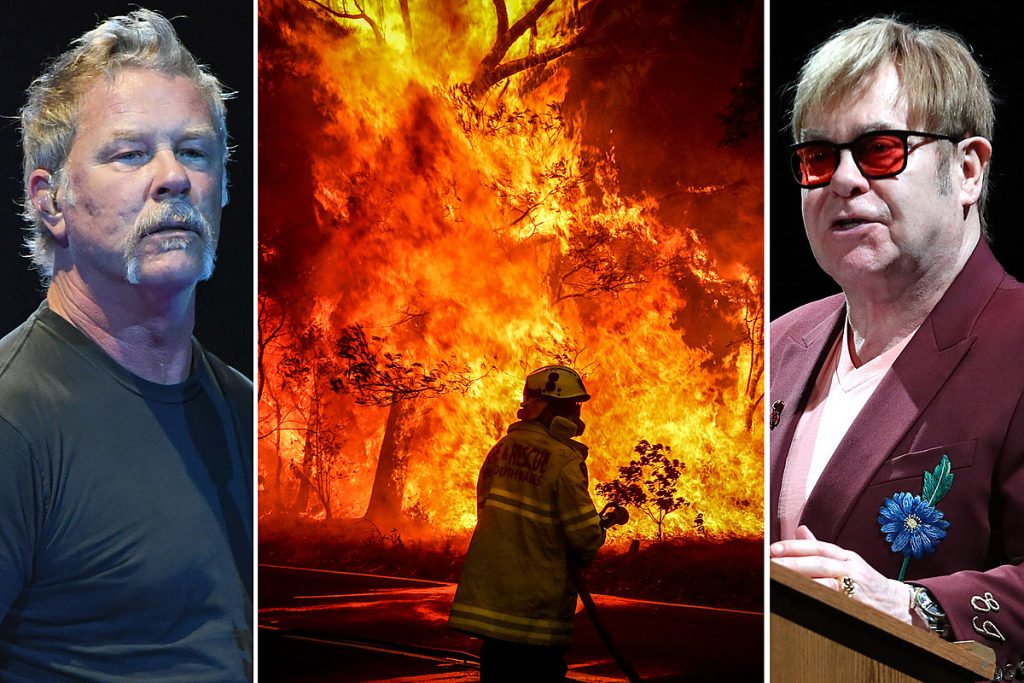 Metallica and Elton John are among the musicians who announced contributions to fight the Australian bushfires as the nation’s worst season on record continued.

To date, the blazes are reported to have burned out 41,000 square miles, killed 28 people and more than 500,000,000 animals and destroyed more than 2,400 homes. A state of emergency was declared last month amid an extended drought that made the fires worse.

“We are totally overwhelmed by the news of the wildfires sweeping through millions of acres across Australia, with major impact in New South Wales and Victoria,” Metallica said in a statement. “The resulting destruction and devastating effects on all residents, animals, the environment and the incredible land in Australia is truly heartbreaking. Please join us and do whatever you can to assist as we, along with our foundation All Within My Hands, are pledging [$516,000] to the NSW Rural Fire Service and to the Country Fire Authority in Victoria to aid in the relief efforts.”

John announced his contribution during an emotional speech at a concert in Sydney, telling the audience, “You should all be in awe of the work that the firefighters are doing. There are people out there who have lost their lives trying to save homes. There are people who have lost their lives and their homes. And last is the plight of the animals and loss of their habitat that, frankly, is on a biblical scale and heartbreaking. Therefore, tonight I will be pledging $1 million to support the bushfire relief.”

With other artists like Kylie Minogue and Kacey Musgraves and actors Chris Hemsworth and Margot Robbie making contributions and highlighting the disaster, the Sydney Morning Herald estimated that $96 million has been raised, including more than $30 million via a social media campaign by comedian Celeste Barber.

Meanwhile, Queen are connected with a benefit concert planned in Sydney on Feb. 16. While the list of performers was still in development, MusicNews.com noted that the band will perform at the city’s ANZ Stadium the previous night. Guitarist Brian May said in a statement that he felt “helpless.” “Can’t stop thinking about the tragic Australian fires,” he said. “Can it be true? Almost unthinkable. And no end in sight? What can we do? We can pray. And we can put pressure on our leaders to prioritize the health of our planet rather than ‘the economy.’ It’s already too late for these creatures. We can only pray it’s not too late for the rest of our world.”

Australian band Airbourne provided a list of online locations where people can donate and find further information. “Australia is literally burning – the smoke can be seen from space and has even turned the white snow caps over in New Zealand black,” they wrote. “Any help from you will be greatly appreciated and will go a long way — even just one pound, one euro, one dollar or one peso can help. … Every little bit helps, rockers — Australia is burning.”