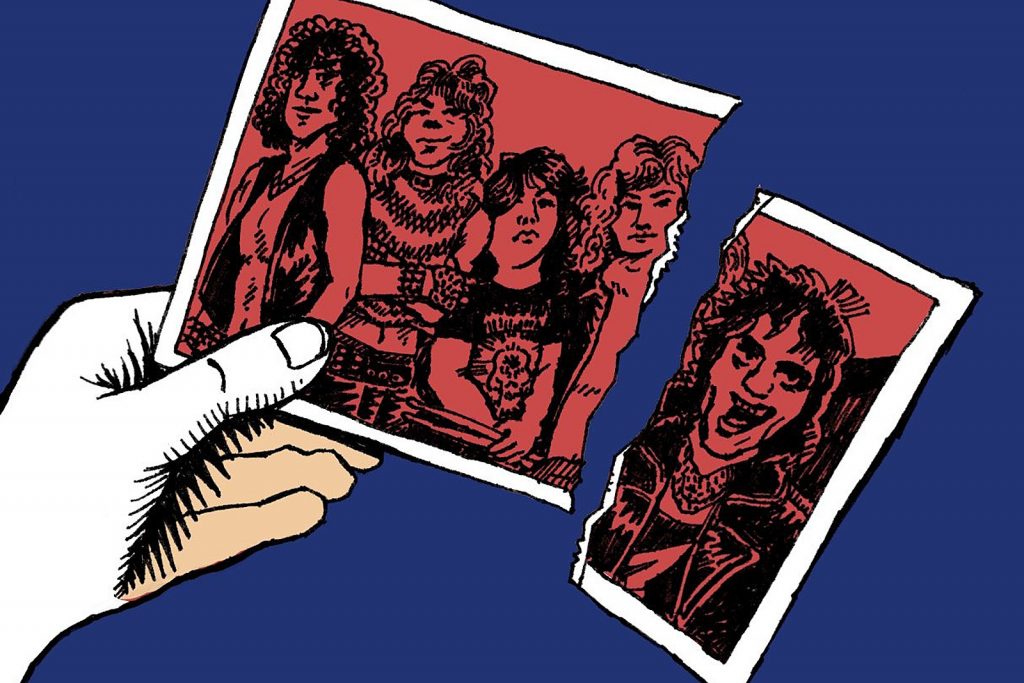 On Friday, April 23, 1982, a metal bill capped by J. P. Fires, Leatherwolf and Riptide played the newly-opened Concert Factory, a short-lived Costa Mesa venue that had replaced storied California punk club Cuckoo’s Nest. An old flyer advertises Switzerland’s Krokus headlining, though apparently that didn’t happen. But that show is still questioned and speculated on today, not so much for Krokus’ absence, as for the one-time appearance of a Los Angeles quintet billing themselves as Metallica.

It was Metallica’s fourth-ever performance, and first at the Concert Factory. Four of their eight songs that night were covers that the band hoped to pass off as originals, including two Diamond Head songs, Blitzkrieg’s title song and a version of Savage’s “Let It Loose” that Metallica never ended up properly recording. They debuted a new song called “The Mechanix,” written by star lead guitarist Dave Mustaine, which would help launch Megadeth‘s career on their debut album, Killing Is My Business… and Business Is Good!. The other three songs, as well as a reworked “Mechanix” into “The Four Horsemen,” ended up on Metallica’s pulverizing debut, Kill ‘Em All. But even a devoted metalhead looking at the scowling kids on the back of Kill ‘Em All might have had trouble recognizing the band opening up the Concert Factory show April 23.

Bassist Ron McGovney would play his last show with Metallica in November, replaced by Trauma’s Cliff Burton, and Mustaine would famously be replaced by Exodus’ Kirk Hammett in just under a year from the Concert Factory show. Those stories are metal lore, and Metallica’s career is one of the most examined in music history. But little is known about the fifth bandmate at the Concert Factory show, a man calling himself “Damian C. Phillips.”

“We took on this guy named Brad Parker, a.k.a. Damian C. Phillips, which was his stage name,” McGovney told Shockwaves’ Pounding Pat O’Connor in 1996. “We did one show at the Concert Factory in Costa Mesa, and while James, Lars and myself are getting dressed to go on stage, we hear this guitar solo so we look over the railing of the dressing room and we see Brad on stage just blazing away on his guitar. So that was Metallica’s first and last gig with Damian C. Phillips. Later I think he went on to join Odin.”

Authors Paul Brannigan and Ian Winwood include this story in their book Birth School Metallica Death, adding, “When the band convened in Ron McGovney’s garage later that same week for the purpose of recording their first ‘proper’ demo tape, Parker was not invited to attend.”

A search for Parker in online metal encyclopedia Metal Archives has one obscured picture, and notes a one-year stint as Odin’s guitarist, 1982-1983. (He does not partake in Odin’s memorable appearance in The Decline of Western Civilization Part II: The Metal Years.) But unlike McGovney, Mustaine or onetime guitarist Lloyd Grant (recruited to play on the “Hit the Lights” demo), Parker has not appeared with his old bandmates at events like Metallica’s Rock Hall induction or 30th anniversary shows. When asked on Twitter about Parker’s whereabouts in 2020, McGovney responded “I have no idea.” The only mention of Parker on Metallica’s website is in the band’s timeline: “Metallica attempts to perform a show as a five-piece band including Brad Parker (also known as Damion (sic) C. Phillips) on second guitar. His performance did not go over well.”

Parker has no confirmed social media account or internet presence. McGovney and Mustaine have sporadically commented about Parker online, with McGovney offering, “His style just didn’t work out for us” and Mustaine stating, “We did a show with a guy that had a feather earring and that was about it. Damian Phillips was his ‘stage name’ real name Brad Parker.” But there has not been any confirmed word from Parker about his time in the band. One could see having friendly interactions with Metallica fans, as McGovney does, or catching ears with new music projects, like Mustaine or Jason Newsted. But instead, nothing. An in-depth look through interviews with James Hetfield, Lars Ulrich or Hammett uncovers barely any mention of Mr. Parker.

“It was really funny,” Hetfield stated in K. J. Doughton’s 1993 book Metallica Unbound. “The rhythm guitarist hadn’t played in a while, and was freaking out when the club announcer called us on stage. He goes running onto the stage, rarin’ to go, and we’re up there tying our shoes and shit, still tuning our guitars.”

“He used to call himself Damian Phillips on stage, and wore spandex and mascara, and played a Charvel Star Body guitar. He thought he was Randy Rhoads,” Mustaine noted. “He had a great-sounding amp—when he wasn’t there. He looked more like Joanie Cunningham ( from Happy Days) with red hair. We didn’t think he was the right guy for the band, but James didn’t want to play guitar. I’m really happy that he started playing guitar.”

With young Metallica still figuring themselves out, one can see why they’d try the quintet lineup. Many of the world’s leading metal bands, like Judas Priest and Iron Maiden, had the vocalist, two guitarist, bassist and drummer lineup that Metallica attempted that night. As late as 1984, Metallica were still hoping to recruit Armored Saint’s (and future Anthrax growler) John Bush on vocals, with plans for James to stick to rhythm guitar. Metallica have even performed as a five-piece since, including Metal Church’s John Marshall filling in for James on rhythm guitar (after James’ skateboarding accident in 1986 and pyro mishap in 1992) and a few European performances with Lou Reed in 2011, although those were known to be exceptional, temporary cases.

One can see Parker’s showing off getting him kicked out of the band, although he hasn’t told his side of the story. But reading over Mustaine and McGovney’s accounts, one wonders how much Parker’s conflicting “style” was musical, personal or aesthetic. For all their anti-fashion sensibilities, Metallica had a distinct look and style that didn’t leave room for feather earrings. When James famously declared at Donington in 1985 that if you’d come to see spandex and eye make-up, “this ain’t the fuckin’ band,” he might have been referring to a style Parker would have appreciated.

But once more, we’re left to speculate. Hopefully Parker will come forward with a story one day, about his one night in Metallica.