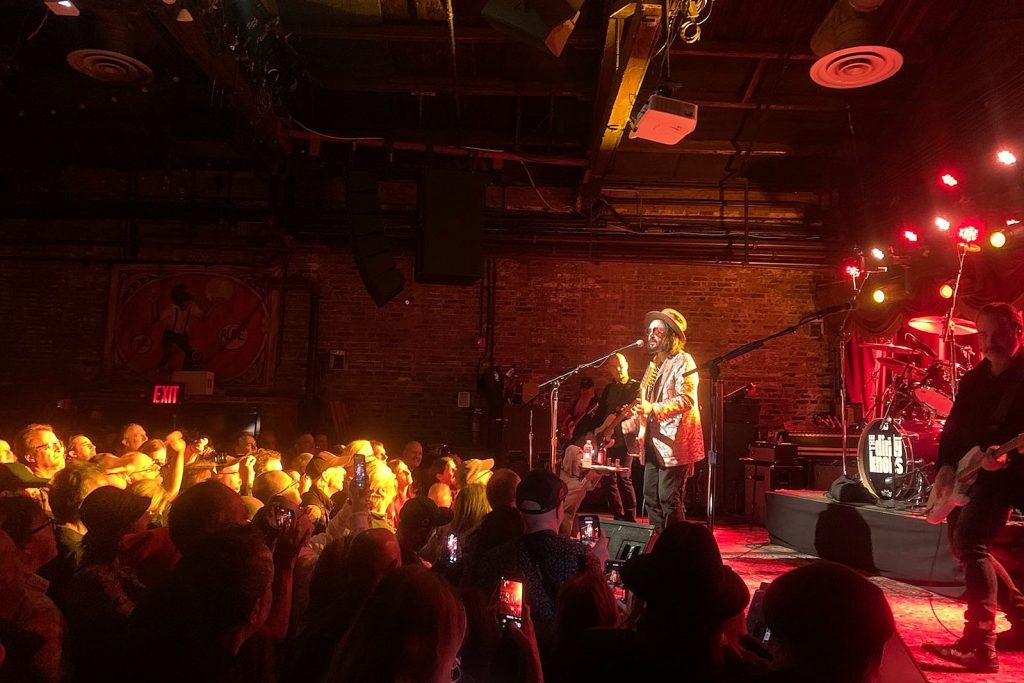 Mike Campbell spent four decades as the masterful but somewhat shrouded guitarist in Tom Petty‘s Heartbreakers. Now he’s learning how to be a confident frontman.

Taking the stage at the Brooklyn Bowl in New York City last night, Campbell looked the part of seasoned rocker in mirrored sunglasses and snakeskin jacket. “I hope you paid the babysitter because we’re gonna be here a long time,” he said.

Campbell now fronts the Dirty Knobs, a hard-rocking group the guitarist began playing with when he wasn’t occupied with his “other band,” as he referred to it throughout the night. The Knobs include drummer Matt Laug, Lance Morrison on bass and guitarist Jason Sinay, whom Campbell admiringly described as “the closest thing to Brian Jones I’ve ever heard.”

The Knobs didn’t so much arrive onstage as take it by storm, opening with “Wicked Mind,” a song from their recently released album, External Combustion. More new material followed with songs like “Dirty Job,” “Electric Gypsy” and “Rat City.” The band dipped into its catalog, featuring songs from 2020’s debut, Wreckless Abandon, including “I Still Love You,” “Don’t Knock the Boogie” and crowd favorite “Fuck That Guy,” which, Campbell explained, got its title from country star Chris Stapleton. “I think he was embarrassed to write it,” Campbell noted. “But I wasn’t.”

Campbell, who’s been touring with the Knobs’ original music for only a few months, isn’t used to being in the center spotlight, but there’s an unmistakable joy that spreads across his face when he interacts with an audience, leading them in vocal lines, waving to fans and throwing guitar picks into their hands. A darkly lit part-time bowling alley was the perfect venue for the Knobs’ gritty, straightforward rock ‘n’ roll.

He’s a humble frontman but also keenly aware of his legacy, pulling out a handful of Heartbreakers songs and pumping new life into them. He dedicated “Refugee” to late “brother” Petty, as well as to the people of Ukraine. Bathed in blue and yellow lights, Campbell fittingly sang, “Everybody’s had to fight to be free.”

“Southern Accents,” “Fooled Again (I Don’t Like It),” “Runnin’ Down a Dream” and “You Got Lucky” were also pulled from Campbell’s past, as the onetime sideman guitarist took his new position at the mic. “I love carrying these songs on,” he said. “These are great songs, and they deserve to live. … There’s nothing like the power of rock ‘n’ roll. Thank God.”