Neil Young Plugs In Synths for ‘Landing on Water’ 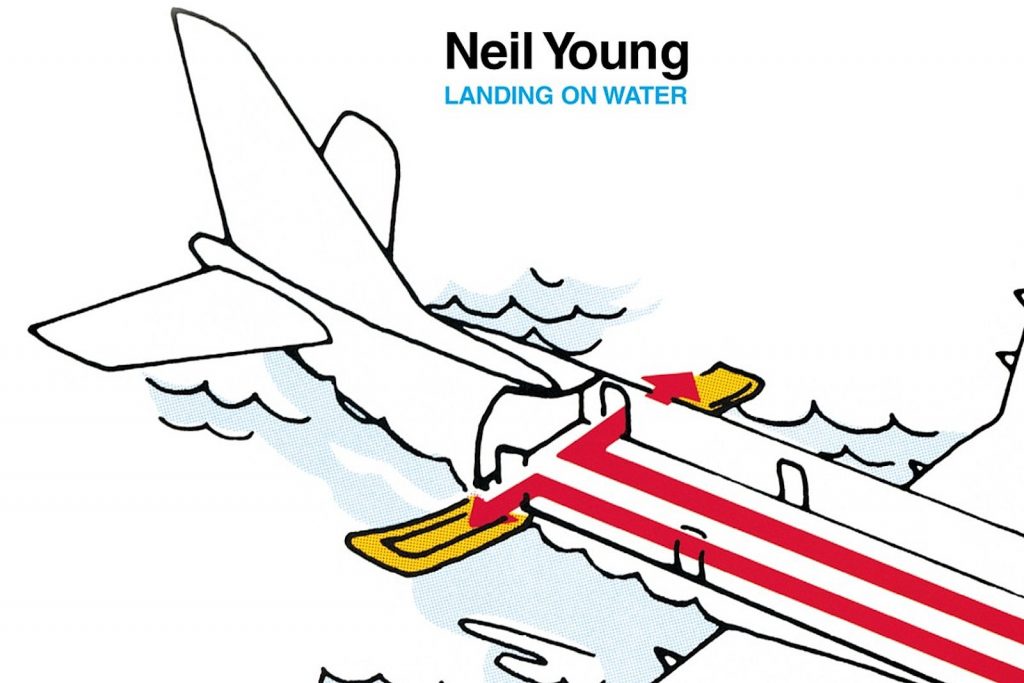 At some point, Neil Young had to give in. He’d been fighting his record company, his muse and the era itself for most of the ’80s. Landing on Water was the sound of capitulation.

Released on July 21, 1986, Young’s 16th studio album surrounded his latest musings with all of the era’s big synths and bigger drums. This being Neil Young, however, even surrender to the wishes of the Geffen suits came off with a cynical wink.

“You see,” Young told Spin‘s Greil Marcus in 1994, “the cover and the title of that album, it’s directions on how to survive an un-survivable thing: how to land on water, in a jet that’s crashing. The most ridiculous damn thing you’ve ever heard of. You’re really landing on water where there’s no clear floor underneath you: Everybody dies.

“That title was there because I knew where that album was going,” Young added. “I knew the process and the thought behind the people who were putting the album out, what they wanted me to do. That was me doing their method and my title for it.”

He made no apologies, as usual. There had been none for Trans, his techno-weird 1982 debut for Geffen Records, or for he passe rockabilly of 1983’s Everybody’s Rockin‘ or the country regression on 1985’s Old Ways. His label, as confused by that point as fans who were staying away in droves, actually sued Young – arguing that he was producing music that was not commercial or even characteristic of previous Young albums. But Young saw that musical adventurism as part and parcel of signing him.

“How can you find yourself if you don’t lose yourself? How can you be renewed if — if you don’t get old?” Young asked Marcus. “You can’t. You have to do that. There have to be peaks and valleys, or it’s boring. If I’ve done that, I guess it’s because I believe in that part of life, and I believe that’s the way things are. Even if it means temporarily sacrificing success. I don’t really give a shit.”

He’d probably been most honest about these impulses on earlier songs like “The Loner,” from his self-titled 1969 debut. That restless figure returns in Landing on Water‘s “Drifter,” refusing to make excuses for his ceaseless wanderings along the way. “I’ve been running all my life,” Young admitted during a Vox interview in 1990. “Where I’m going, who the fuck knows? But that’s not the point.”

Promotional material for the album underscored Young’s uneasy relationship with label execs, even as he attempted to fulfill their wishes: An advertisement in NME featured a doctored image of former British prime minister Neville Chamberlain holding the infamous sell-out paperwork he signed with the Nazis in 1938, falsely claiming that he had secured “peace in our time.” The Munich Pact that Chamberlain once waved in the air was replaced, however, by the cover art from Landing on Water.

“I didn’t have anything to do with that,” Young told Spin with a knowing chuckle, “but I kind of like the concept. Whoever thought of that must have been a genius.”

In truth, Landing on Water wasn’t without its small charms: Young takes a sharp jab at ’60s burnouts, for instance, on “Hippie Dream” saying bandmate David Crosby‘s famed “wooden ships … capsized in excess, if you know what I mean.” The tough “Pressure,” this project’s final completed song, spoke to his ongoing problems with Geffen – but the label refused to release it as a single. (“Too much art, not enough compromise,” Young said in the biography Shakey.)

There are also notable moments (“Violent Side,” “Touch the Night”) where the guitar fury that would define his turn-of-the-’90s resurgence peeks out. That makes sense, since some of this material was reportedly first worked out during failed 1984 sessions with his garage-band contemporaries in Crazy Horse.

But the final product – which found Young running his stripped-down demos through a synth workstation alongside coproducer Danny Kortchmar – couldn’t have been further removed.

“The first thing I did was call two of my great pals to work with me on it,” Kortchmar told Songwriter Universe in 2019. “One was Steve Jordan, the great drummer; and the other was Niko Bolas, who’s a brilliant audio engineer. And we came in there and just blew the joint up. That was incredible working with Neil, because we were really pounding away. I was playing a synth bass on most of it, and Neil had pre-sequenced stuff that he’d done on his Synclavier. So we’d run the Synclavier, and Neil would bash away and Steve – his drum sound is just punching right through the wall.”

In fact, there are times when Landing on Water is all drums, as Jordan drowns out the guitars and then Young himself. Young kept producing and overproducing, even after Kortchmar’s departure from the sessions – and all of that only added to the project’s instantly dated, airless feel.

Turns out, Young took some kind of devilish pleasure in that, too. “One record company president in Europe told me it was the most claustrophobic record he had ever heard,” Young told the Courier-Mail in 2009, “and I thought that was pretty cool. He put it on in his Porsche and would turn it up real loud. He just felt like it was all over him.”

Landing on Water didn’t revive Young’s commercial fortunes, perhaps understandably finishing outside of the Top 50 in both the U.S. and the U.K. Back then, a particularly uncharitable Young told a British DJ that the album was a “piece of crap.” Later, he indicated in Shakey that these chart struggles might be attributable to the LP’s experimental nature, saying “it has its high points and low points.”

At the same time, however, Young’s guitar work wasn’t the only hint of a long-awaited breakthrough still to come. Bolas would become a longtime collaborator, returning as engineer for 1987’s Life before taking over as producer or coproducer on a handful of albums, notably 1989’s career-reviving Freedom. By then, Young was back on Reprise, his original label.

“Geffen tried to force me to do things — the record company, not David Geffen himself — when they saw that I was on tangents,” Young told Spin. “Ultimately, ‘Make a record that sounds like you’ – that was a very tough thing to do. But I tried to do a great record [with Landing on Water]. We put everything we had into making that a great record. But I was just starting to come out of the trees at that point.”