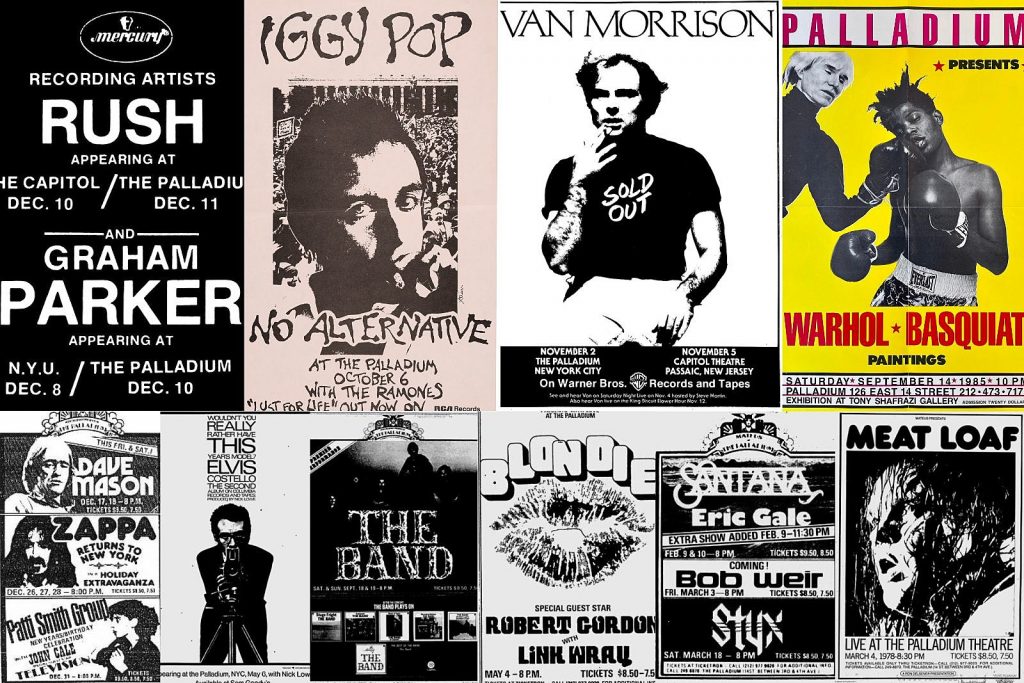 Ask anyone of a certain age in New York City about the Palladium, and the chances of hearing a story about a once-in-a-lifetime concert experience is quite likely.

The Palladium, which closed its doors on East 14th Street in August 1997, hosted just about every recognizable name in rock (and plenty of long-forgotten ones too), served as the setting for live-album recordings and wound up becoming the backdrop for a slew of iconic moments in rock history. But the Palladium’s path to legendary status took a few decades.

It wasn’t always known as the Palladium, either. Built in 1927, the space first operated as the Academy of Music, an esteemed New York City opera house whose first location was across the street. The Academy eventually shifted away from opera operations and was opened as a movie palace by William Fox, founder of the Fox Film corporation. It showed movies through the early ’70s, but also began hosting concerts in the ’60s — the Rolling Stones, on their third tour of America, performed a matinee show there on May 1, 1965.

When Bill Graham‘s Fillmore East officially closed in June 1971, the next logical place to take things was the Academy. To the dismay of many, the venue had begun to develop a reputation by then as “the sleaziest, tackiest hall in town,” according to the New York Times.

Watch Frank Zappa Perform at the Palladium in 1981

That mattered little, of course, to most rock ‘n’ roll bands. The allure of the space, combined with its relatively intimate size (seating capacity was capped at 3,400) and reportedly high-quality sound system, made the Academy one of the premier destinations for any rock band visiting New York. Aerosmith opened for Humble Pie and Edgar Winter‘s White Trash in December 1971, playing their first shows outside of New England. That same month found the Band recording what would become their 1972 live album, Rock of Ages. The Grateful Dead played seven consecutive shows in March 1972 where Bo Diddley appeared as a guest performer. A jam-packed lineup of Blue Oyster Cult, Iggy Pop and Kiss performed on New Years Eve 1973. When Genesis brought their Lamb Lies Down on Broadway Tour to New York in 1974, they played the Academy.

Perhaps in an effort to change more people’s minds about the allegedly degenerate venue, Academy promotor Ron Delsener made sure the place underwent a rigorous refurbishing in the mid ’70s. That included changed the name to the Palladium in September 1976. The venue reopened with another performance from the Band, complete with a live radio broadcast, during which Bob Dylan made a surprise appearance. Bruce Springsteen and the E Street Band played a whopping six shows at the newly christened Palladium in October and November 1976. A slew of British metal bands began making stops at the Palladium in the late ’70s and early ’80s, as Judas Priest, Motorhead, Iron Maiden, Def Leppard and Ozzy Osbourne began to stake to their claims in America.

With every year, the Palladium made more and more history. Kiss played the venue in July 1980, marking their one and only North American appearance of the year. New drummer Eric Carr was also introduced to the American press before Kiss sett off on their Unmasked Tour.

Watch the Clash Perform at the Palladium in 1979

Punk and new wave also found space at the Palladium, including shows by the Ramones, Blondie, Television, U2, Roxy Music, Lou Reed and others. The Clash arrived in September 1979, playing two performances. At the first one, bassist Paul Simonon grew restless trying to bring the audience to their feet because the Palladium was a seated venue and the Clash were accustomed to something a bit rowdier. As the bouncers tried to settle the crowd, Simonon made his feelings known.

“That frustrated me to the point that I destroyed this bass guitar,” he later said in an interview with Fender. “Unfortunately you always sort of tend to destroy the things you love.” Simonon brought his instrument down hard on the stage floor, an action that was captured by photographer Pennie Smith and ultimately used on the cover of 1979’s London Calling.

In 1985, the Palladium was converted from rock venue to nightclub, overseen by former Studio 54 owners Steve Rubell and Ian Schrager. Architect Arata Isozaki was hired to design the space, which included commissioned pieces of art by Keith Haring, Jean-Michel Basquiat and Francesco Clemente. In a 2022 exhibit of his work, the original Basquiat paintings from the Palladium were put on display in a quasi-“recreation” of the space. (You can view photos below.) Various DJs appeared at the Palladium, where contemporary Euro and house music blasted, strobe lights pulsed until the early hours of the morning and celebrities like Andy Warhol, Grace Jones and Liza Minelli frequented.

The Palladium remained open until August 1997, when it was bought by New York University. The next month, it was demolished and a collegiate residence, which still stands today, took its place.

Including the venue’s original ’80s artwork.