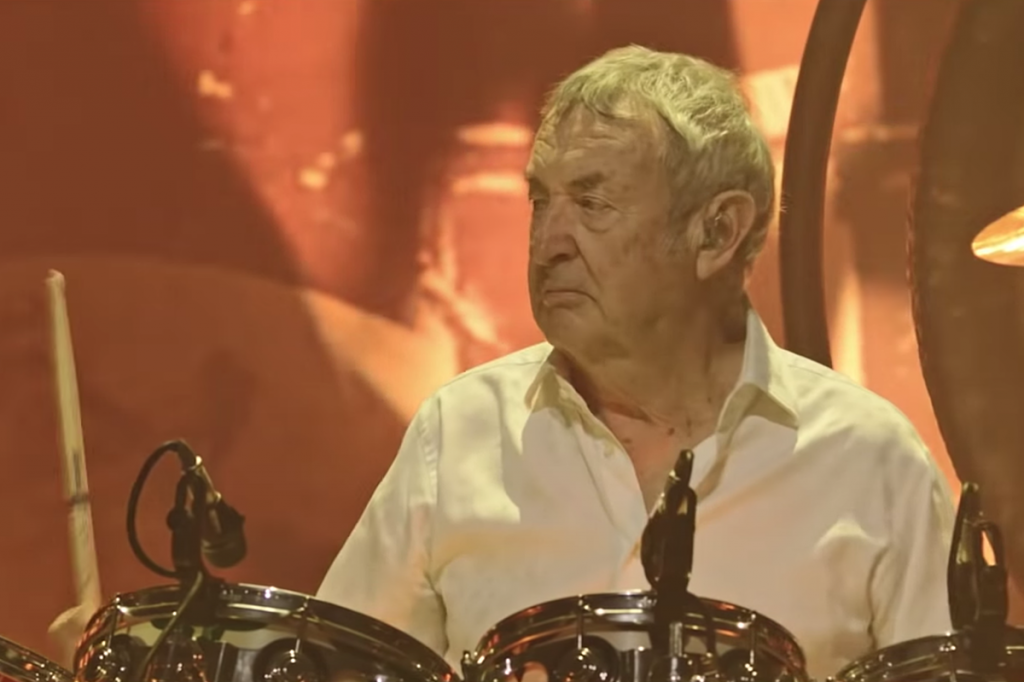 There was a man mixing paint in a tray at the soundboard, an interesting thing to see as we made our way to our seats nearly a year ago in April 2019 at the Akron Civic Theatre.

Just a short time later, while members of Nick Mason’s Saucerful of Secrets took the stage, the results of what he had been doing would become clear: Splotchy amoeba-like globs danced across the giant screen behind the band, a fascinating element of what seemed like a psychedelic view through a microscope.

Saucerful of Secrets dug deep into a stormy version of “Interstellar Overdrive” from 1967’s The Piper at the Gates of Dawn, the first of many selections plucked from the early pre-Dark Side of the Moon years of Pink Floyd.

“I think it’s a sort of mission statement in a way,” the Pink Floyd drummer tells UCR with a laugh. “You know, it sort of sets the scene.”

“One of the things that worried us all to begin with was that people would think – I don’t mean this in too derogatory of a way, but it was going to be another tribute band playing ‘Money’ and ‘Comfortably Numb’ and ‘Another Brick in the Wall’ and so on,” Mason continues. “I think that whole thing of ‘Interstellar’ with its breakdown and all of the rest of it, it shows basically what we have in mind for the rest of the evening.”

For fans – and Mason himself – the setlist was a long overdue trip back in time. Saucerful of Secrets, named after Pink Floyd’s final album with early leader Syd Barrett, brought a number of songs to the surface that had been long neglected in live performance. In some cases, they’d never performed in concert by Pink Floyd at all. It was a “deep cuts” kind of show that fans often wish for from their favorite group, and yet rarely get.

Thankfully, the initial touring run has been documented with Live at the Roundhouse, a new concert film and audio release that will arrive in April.

The film itself will screen nationwide this week on Tuesday (March 10) for one night only, offering Pink Floyd lovers the chance to experience the concert in full surround sound with optimal video quality. Documentary footage is interspersed with the performances, offering an inside view into how the band came together – and it also drills down into their individual history with Pink Floyd’s music.

Ticket information for the special screening can be found here.

Watch the Trailer for Nick Mason’s ‘Live at the Roundhouse’

“In a way, it was a very sort of old-school version of how you put a band together – which is people that you like, deciding that it would be fun to work together,” Mason says. “We had no idea, really. I certainly had no idea of whether it would work or not. I think we booked two days in the rehearsal room. It was a really sort of pretty glossy room. To keep it really simple, I didn’t even bring my own drum kit in. We just used one that they had in the room. By the end of the day, we all looked at each other and went, ‘That was great! Let’s do more!’”

Less than two weeks after their initial jam, Saucerful of Secrets took it to the stage, mounting an impromptu performance at the tiny Dingwalls in London. It was a successful test run that would be followed by more than a year’s worth of tour dates, culminating with a tour-closing gig in Warsaw, Poland in July 2019.

Mason and the Saucerful of Secrets will be back on the road in April following the release of Live at the Roundhouse, starting with a run of European dates. He says fans in North America can expect additional shows on U.S. soil starting in September.