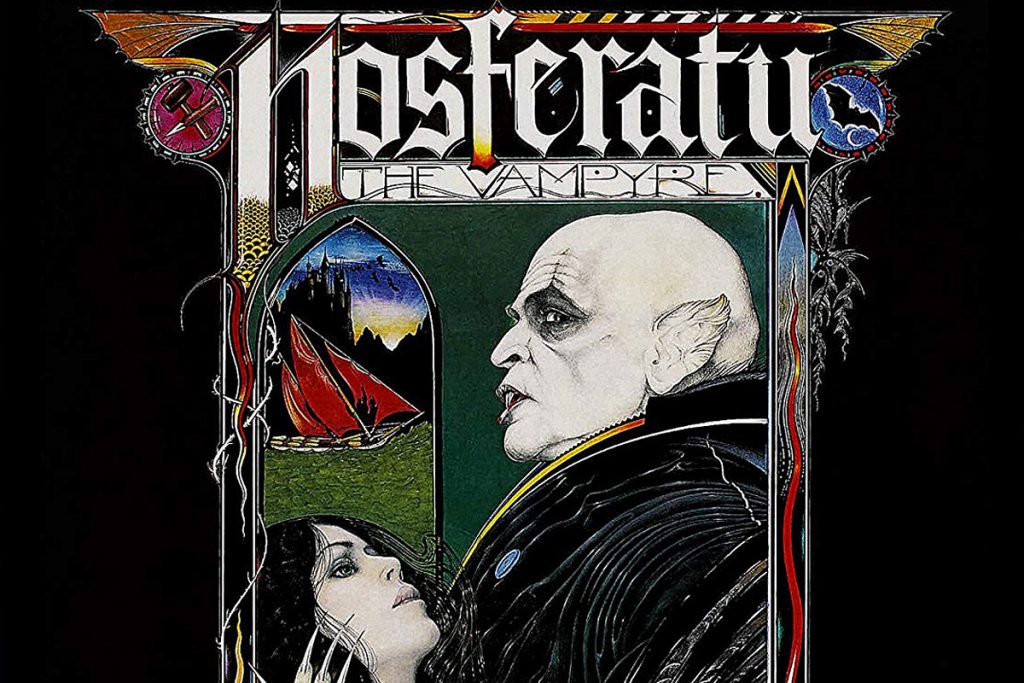 Werner Herzog‘s status as a pop culture figure sometimes threatens to overshadow his accomplishments as a filmmaker of truly magnificent abilities. If a reminder of this is needed, look no further than his elegiac Nosferatu, the Vampyre, which opened in U.S. theaters in October 1979.

The film is a close remake of F.W..Murnau’s 1922 Nosferatu: A Symphony of Horror, itself an unauthorized retelling of Bram Stoker’s novel Dracula, and was one of the greatest achievements of the silent movie age. Herzog’s film opens in the German town of Wismar, with the unfortunate Lucy Harker (played by Isabelle Adjani) waking from a dream of a bat flying through the night. The dream seems to be a premonition, or perhaps a sign of some internal drive of which she’s barely conscious. Later that day, her husband, Jonathan (Bruno Ganz), is notified by his boss, Renfield (Roland Topor), that he’s being sent to Transylvania to meet with one Count Dracula, who’s interested in purchasing a decaying mansion in Wismar.

Jonathan embarks on an arduous four-week journey that takes him deep into the Carpathian Mountains. At the final village before he enters Dracula’s domain, he’s warned against continuing but presses on, climbing Borgo Pass (which featured in Stoker’s novel); at its summit he encounters a mysterious black carriage that takes him the rest of the way to the Count’s castle.

The exterior shots here allow Herzog to create a powerful feeling of a journey into another world lurking just beyond this one, but it’s when Harker reaches the castle that the film moves into its full realization, thanks to Klaus Kinski, a Polish actor of unrivaled intensity and commitment whose portrayal of Dracula is one for the ages.

Kinski’s Dracula is melancholic, oppressed by the unvarying days of his immortality. He’s also the purveyor of an evil that resembles a force of nature. Where he goes, rats and plague follow. When he sees a picture of Lucy that Jonathan carries in a locket, he becomes obsessed with her. After feeding on Jonathan for several nights, Dracula loads a number of black coffins onto a ship and departs. In his weakened state Jonathan knows Lucy is in danger, but can only slowly chase after the vampire to try to save her.

By the time the ship carrying Dracula arrives in Wismar, the crew has all vanished, the dead captain has lashed himself to the wheel and the ship is infested with rats. Soon the rats and the plague infest Wismar, and the population begins to die off.

Lucy realizes this, and when Jonathan arrives back in the city and doesn’t recognize her because he’s turning into a vampire himself, she sets out to trap Dracula. She lures him to her bedroom and gives herself willingly to him, distracting him long enough that he doesn’t notice the arrival of the dawn. She gives her life to defeat him; the film’s final ironic twist is that she cannot save Jonathan in the process. He is now fully a vampire and rides off at the end to begin his own reign of terror.

Some film historians have called Nosferatu the Vampyre Herzog’s meditation on the infestation of Germany by the Nazis. This is a suggestive idea but not quite right. Like so much of Herzog’s work it’s about larger things than just the political, and the whole is infused with the feeling of the human struggle against the larger forces of the universe. Here, those include time itself, as well as the torments of loneliness and yearning.

He achieves this through his singular, tactile approach to filmmaking, combining hand-held camera work with a total devotion to finding images that convey the sublime and the grandiose. In this quest, Kinski is the perfect partner. Nosferatu is the third of the five films the two made together, including Aguirre, The Wrath of God (1972) and Fitzcarraldo (1982), two of the greatest portrayals of mad obsession in the history of cinema.

Kinksi was a prolific actor, but no director channeled his energies as well as Herzog. His Dracula is based on the famous vampire played by Max Schreck in the original Nosferatu, and includes many moments in which Kinski mimics the earlier actor’s movements and postures with uncanny accuracy. At the same time, Kinski’s Dracula is alive with insatiable desire and a haunting self-awareness in a way that few screen vampires have ever been.

Like Herzog himself, Kinski was willing to go to any length to achieve what he thought was necessary for his career; also like Herzog, his reputation for erratic behavior can obscure the fact of his immense talent. (For an example of his mania, see his chaotic performance of a one-man show he called Jesus Christ Savior in 1971.) But when he needed to, he could be subtle and exacting in his work. His death scene in Nosferatu is a perfect example of this: When dawn breaks, he collapses in a sudden spasm devoid of histrionics but with such apparent external force that it seems the life has been simply plucked out of him.

All of this contributes to a fascinating and beautiful film, about which Roger Ebert once wrote that if vampires “were real, here is how they must look.”

Despite his critical acclaim, Herzog’s popular reputation as a filmmaker is due for a re-evaluation. His The Enigma of Kaspar Hauser (1974) is one of the great humanist achievements of the ’70s, and throughout his career he has done as much as anyone to elevate the documentary form into a meditation rather than simply an examination. For someone wondering what all the fuss is about, Nosferatu, the Vampyre is a great place to start.