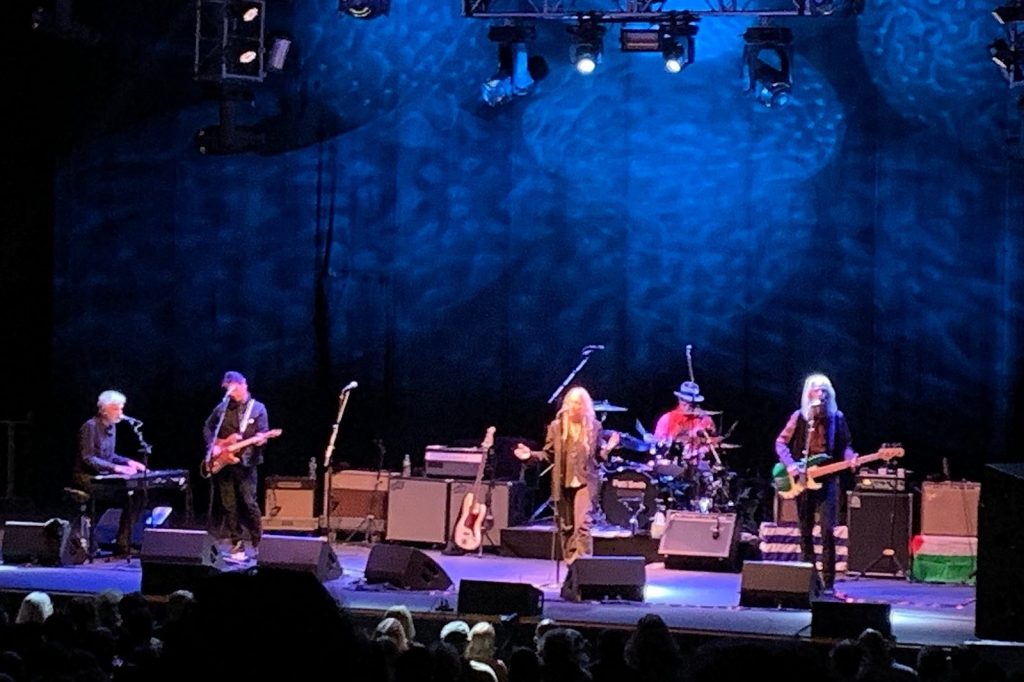 Patti Smith likes to laugh with her audience. Between songs at the Capitol Theatre in Port Chester, N.Y., last night, the legendary singer-songwriter bantered with fans.

“How do you spell New York?” one attendee called out. “P-A-T-T-I,” Smith amusedly replied. Backed by longtime collaborators Lenny Kaye on guitar, bassist Tony Shanahan and Jay Dee Daugherty on drums, Smith began the evening with “25th Floor,” a track from her third album, 1978’s Easter. (Guitarist Jack Petruzzelli, who subbed for Smith’s son, Jackson, rounded out the lineup.)

Dressed plainly in her usual beatnik black and combat boots, Smith looked the part of toughened New Yorker. “Oh, shit, there’s my metro card!” she said after reaching into her coat pocket. “I was looking all over for this damn thing.”

It was Smith’s first time appearing at the Capitol, an intimate but historic venue just north of New York City that’s loved by performers and has hosted the likes of Elvis Costello, Phish, Tom Petty, Bob Dylan and the Grateful Dead. “There’s only two theaters, man … that are set up pretty groovy all around for music and for smooth stage changes, good lighting and all that – the Fillmore and the Capitol Theatre,” Jerry Garcia once noted. “And those are the only two in the whole country.” Smith paid tribute to the late Dead leader, whose photo adorns several walls of the venue, with “Grateful,” a song she wrote the day Garcia died in 1995.

Smith addressed the particular weight of the evening early in the show. “I would be lying if I said I wasn’t affected by what is happening in the world,” she said, referencing the news of Russia’s invasion of Ukraine. “There are people losing their fucking country tonight. Peace as we know it is over in Europe.”

Smith had been scheduled to perform at the Capitol in December on the occasion of her 75th birthday, an event that was rescheduled due to an uptick in coronavirus cases. Smith’s daughter, Jesse, who played keyboards during a handful of songs, presented her mother with a surprise cake onstage last night as the audience sang “Happy Birthday.”

Performing with the energy and zeal of someone half her age, Smith ran through a set that ran the gamut of favorites like “Dancing Barefoot” and “Because the Night” to more ruminative numbers like “My Blakean Year” and a cover of U2‘s “Vertigo.” Smith’s gestures and gyrations aren’t as fervent as they were at the height of her career in the late ’70s, but they still exude a feeling of passion that brought the audience members to their feet.

Smith performed a cover of Stevie Wonder’s “Blame It on the Sun” during the encore, before closing the night with “People Have the Power.” She adjusted the lyrics to fit the moment: “People have the power to dream, to vote, to strike.” “We are free fucking people,” Smith said while encouraging fans to remain vigilant, optimistic and empathetic. “Don’t lose heart. … Together we can do anything. Motherfuckers, we’re alive.”