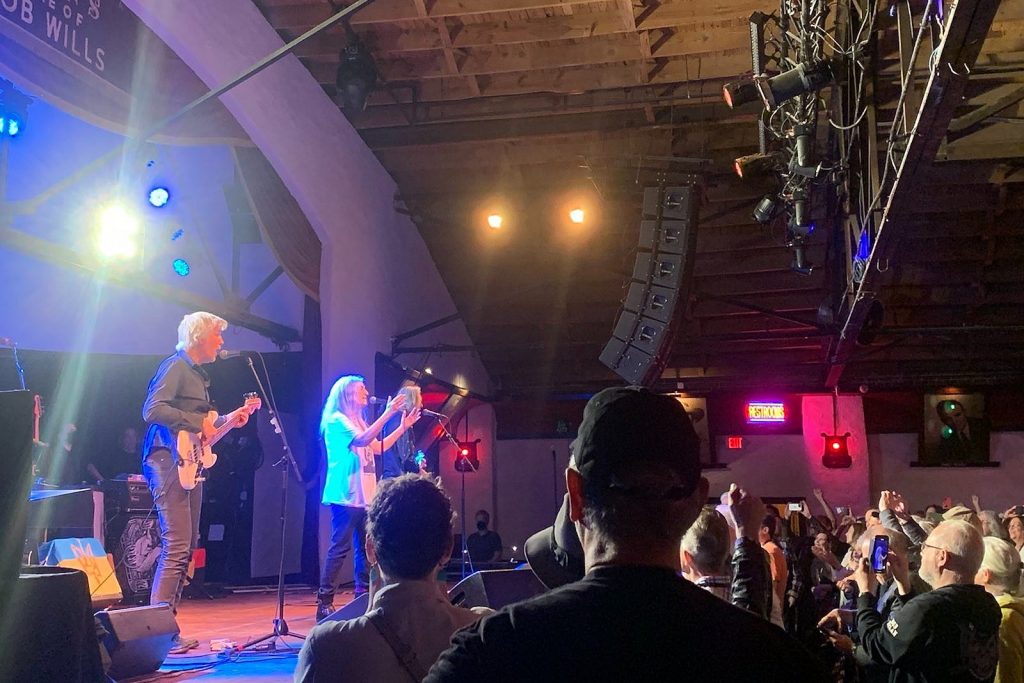 Patti Smith performed last night at Cain’s Ballroom in Tulsa, Okla., marking the second evening of festivities related to the opening of the Bob Dylan Center.

The Bob Dylan Center will officially open to the public on May 10, featuring hundreds of items from the singer-songwriter’s vast archive, including handwritten lyric sheets, letters from fans, instruments and other various interactive installations.

Smith’s concert, which followed a performance by Mavis Staples on Thursday, was the first time Smith had appeared at Cain’s Ballroom, a historic western swing venue, since 1978. (It was the same year she released her third studio album, Easter, which featured her hit collaboration with Bruce Springsteen, “Because the Night.”)

“All I can say is I loved this place in 1978 and my love has not diminished,” Smith said from the stage.

Backed by her bandmates — guitarists Lenny Kaye and Jackson Smith (Smith’s son), drummer Jay Dee Daugherty and bassist Tony Shanahan — Smith included a handful of Dylan covers in her set list in honor of the occasion, including an opener of “Boots of Spanish Leather,” plus “The Wicked Messenger” and “One Too Many Mornings.” Her performance of “Because the Night” also included a special shoutout: “Because the night belongs to Bob Dylan,” she sang.

Smith relayed a few stories about her history with Dylan, from her memories of buying her first Dylan record to her recollection of touring with him in the ’90s. The pair first crossed paths in New York’s Greenwich Village when Smith was a young performer; he came to see her at the Bitter End in 1975, the year she released her debut album, Horses. A fast friendship followed, with Smith joining Dylan onstage multiple times over the years. When Dylan received the Nobel Prize for literature in 2016, Smith accepted the award on his behalf.

“I related completely to him,” Smith recently told the Irish Times of her close connection with Dylan. “His arrogance, his humor, his mergence of poetry and performance.”

Dylan has not attended any of the opening weekend festivities in Tulsa, nor is he expected to, but at Cain’s, Smith offered an alternative way of considering his absence.

“Tonight, he ain’t here, but we are,” she said. “Just joking, he’s every-fucking-where.”