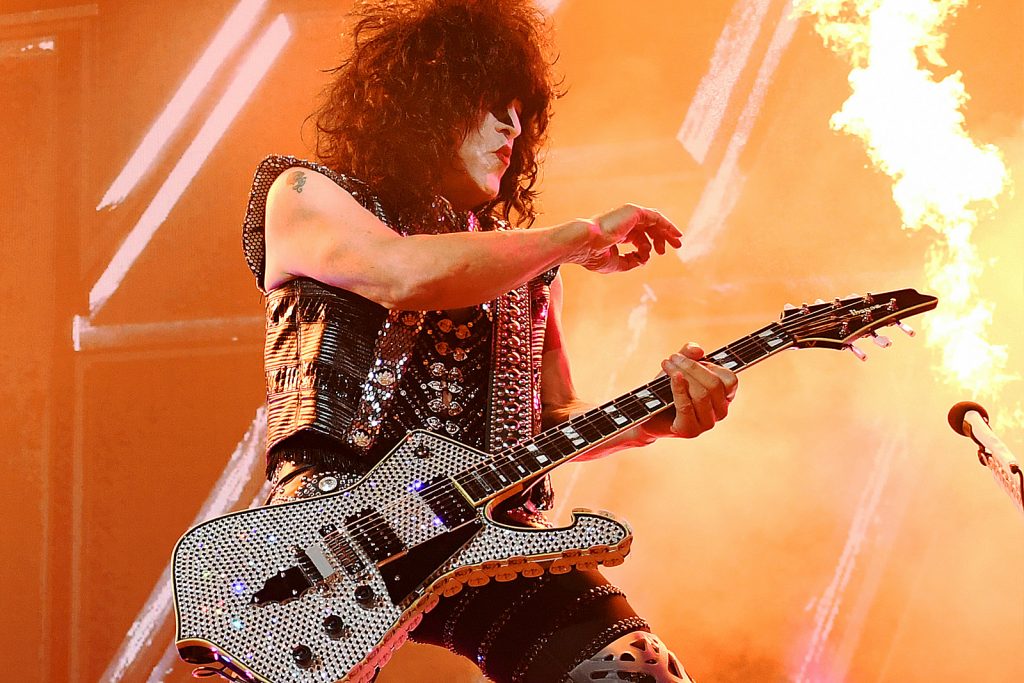 Kiss lost a year of their End of the Road farewell tour due to the pandemic, but Paul Stanley says a new End is in sight.

“I believe strongly by the beginning of 2023 we will be finished,” he tells UCR. And he’s adamant there will be no reconsideration, even for fans asking for more. “It’s a different time than we had pondered [farewell tours] in the past,” Stanley contends. While some of those previous pseudo goodbyes reflected inner-band dynamics, the Starchild says this true end is a simple matter of “physical reality.”

“The fact is that, physically, it’s incredibly demanding to do what we do,” Stanley explains. “Look, we played [recently] in Austin, an outdoor show, 100 percent humidity. We’re running around for two-plus hours, not only with guitars, but I’ve got 30-plus pounds of gear on. There’s a point where you go, ‘You know what? This is more challenge than I want.” And I only want to do it as long as I can do it smiling.

“There’s really no thought about changing our minds. It has nothing to do with personalities in the band or tensions or a difference of opinion or musicality. It’s purely practical. You can play beat the clock, but ultimately the clock wins.”

The final Kiss show, which was originally set to take place on July 17, 2021, is now expected to happen in late 2022 and will be in the band’s birthplace. “It seems only natural to be in New York,” Stanley says. “That is where the band started, and that was really the background for the band getting together and writing these songs and played loft parties and played clubs starting with an audience of probably 10 people. It seems we should go full circle.”

There is a question of whether Kiss will be joined by former members on that final night. Onetime guitarists Ace Frehley and Bruce Kulick have both expressed interest, but Stanley says “honestly, we haven’t’ really thought that far down the road. We’re having a ball. The show is everything that I would like to see the band history culminate in. In one way or another, every night all the former band members are represented by the songs we’re doing. We’re hitting all eras for the band, and I salute everybody who’s been in the band and champion not only their participation but their contribution. As to where that will lead, I have no idea.”

Despite an end to touring, however, Stanley is certain the band will not be going away. “Kiss has a life of its own. I couldn’t stop Kiss if I wanted to,” he acknowledges. “The band is so much more than music.” More of that music, in fact, is coming Nov. 19 with a 45th-anniversary Super Deluxe edition of the best-selling Destroyer, featuring two discs of demos and rarities and a fourth featuring a May 1976 concert from Paris.

Also on tap is Shout It Out Loud, a Netflix biopic that will be directed by Joachim Ronning and, unlike the career-spanning A&E documentary Biography: KISStory earlier this year, will focus just on the band’s first four years, through the breakthrough of the Alive! album.

“We weren’t looking to document the band’s history. I think it’s too big a story to try to chronicle all of it,” Stanley says. “I think the dynamics of how it started and how it reached the boiling point and got that initial success are really engaging. There’s loads of great stories afterwards, but that’s the foundation that we built on. That’s what made everything else possible, so that’s the story to tell.”

Stanley calls the film “a work in progress,” with casting and other announcements expected before year’s end.

The End of the Road tour is back on the road after pausing while Stanley and then Gene Simmons battled cases of COVID during late August and early September. Stanley tweeted that the virus “kicked my ass” but says he’s feeling good now, and is not seeing any evidence of long-term effects. The touring party, meanwhile, is being even more careful than it was before.

“We were very, very tight in terms of the bubble around the band – more so now, and we’re doing everything possible to stay healthy,” he says. “That was sobering because we just found ourselves going, ‘What else could we have done?’ At this point we’re that much more cautious. It’s so insidious. It does make you aware that if you think you’re going to evade COVID, the virus has a different idea.”