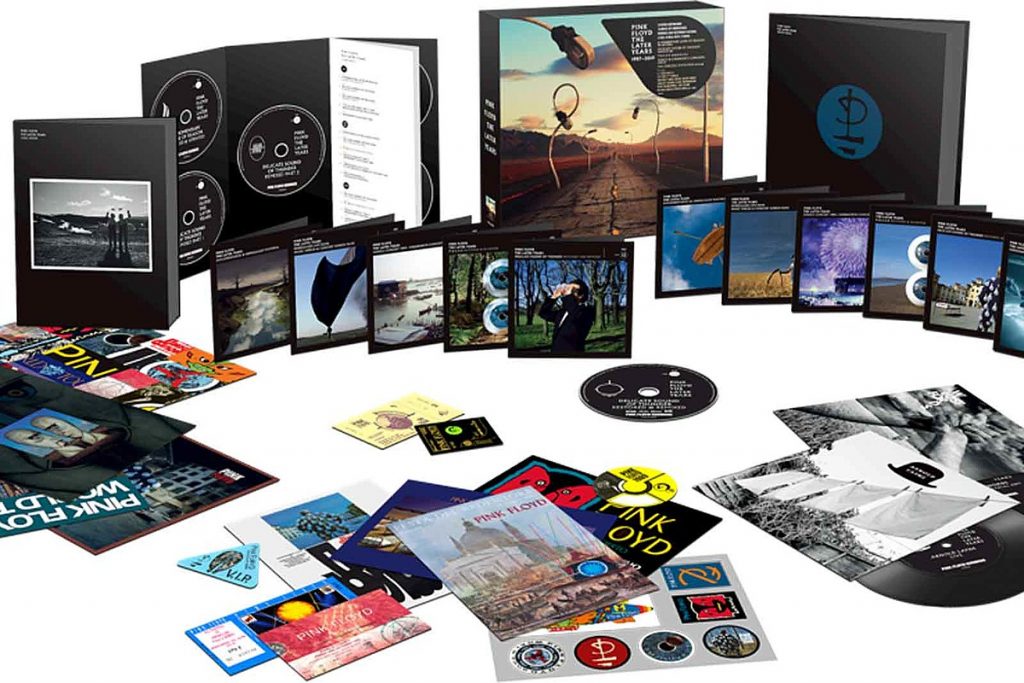 Pink Floyd left the ’70s in a familiar spot: perched at the top of the charts.

The Wall was released in the final weeks of 1979 and would soon become the band’s third No. 1 album. The single “Another Brick in the Wall Part II” was also on its way to No. 1. By the time The Final Cut arrived in 1983, the band was basically a solo vehicle for Roger Waters, who eventually left two years later.

Guitarist David Gilmour, drummer Nick Mason and keyboardist Richard Wright regrouped with The Wall co-producer Bob Ezrin for 1987’s A Momentary Lapse of Reason, kicking off a new era for Pink Floyd – one that revealed a steadfast determination to move forward following Waters’ departure, and yielded two more No. 1 albums and a run of successful tours before they finally called it a day in 2014.

This post-Waters era is collected on The Later Years, a 16-disc box of remixed albums, concert recordings, unreleased tracks and videos. It’s a period in which the band moved into arena rock, something that had been tentatively approached earlier but held at bay by Waters’ insistence that Pink Floyd had little to do with that scene.

He had a point. Earlier albums like The Piper at the Gates of Dawn and A Saucerful of Secrets through world-conquering LPs The Dark Side of the Moon and Wish You Were Here didn’t sound like what rock music was supposed to sound like, and later set a template for what rock music sounded like going forward. A Momentary Lapse of Reason and 1994’s The Division Bell are somewhat faceless in comparison.

Unlike 2016’s exemplary The Early Years 1965-1972 box, The Later Years doesn’t offer much in unreleased material. There are some unfinished leftover tracks from The Division Bell and concerts from 1989 and 1990, but the focus here is on the new 5.1 remixes of the studio albums and the live records Delicate Sound of Thunder and Pulse, plus Blu-rays featuring live tracks and documentaries. It doesn’t have the deep sense of excavation that made the earlier set so essential; rather The Later Years seems to be a summation of the band’s final chapter, mostly onstage.

Still, it’s an important part of Floyd’s history, and a surveying of the massive concerts that marked this period is summarily huge. The group was often relying on Waters-era material for its sets – “Shine on You Crazy Diamond, Parts 1-5,” “Time” and “Comfortably Numb” remained – while top-loading the shows with newer cuts like “Learning to Fly” and “On the Turning Away.” It’s an even balance, but you can instantly tell where fans’ legions lie.

Pink Floyd were basically a different band during these years, a less-adventurous unit that was content to fill those arenas and play those rafters-shaking solos Waters was so wary of. That makes the music less interesting and their intentions during this period a bit suspect. But then again, Waters was always the one who had a problem being famous. The other guys merely embraced this by-product – which, let’s face it, was a part of them ever since The Dark Side of the Moon took Pink Floyd to a whole other stratosphere – when the opportunity arose.

The Later Years makes no excuses or apologies, and it doesn’t have to. Pink Floyd were a good band in the ’80s and ’90s; just listen to the expertise with which they pull off the 1990 Knebworth concert here. There’s a tightness to this version of the group that wasn’t there before. In the end, they went out respectably and, more or less, on their own terms. How many of their peers can say that?