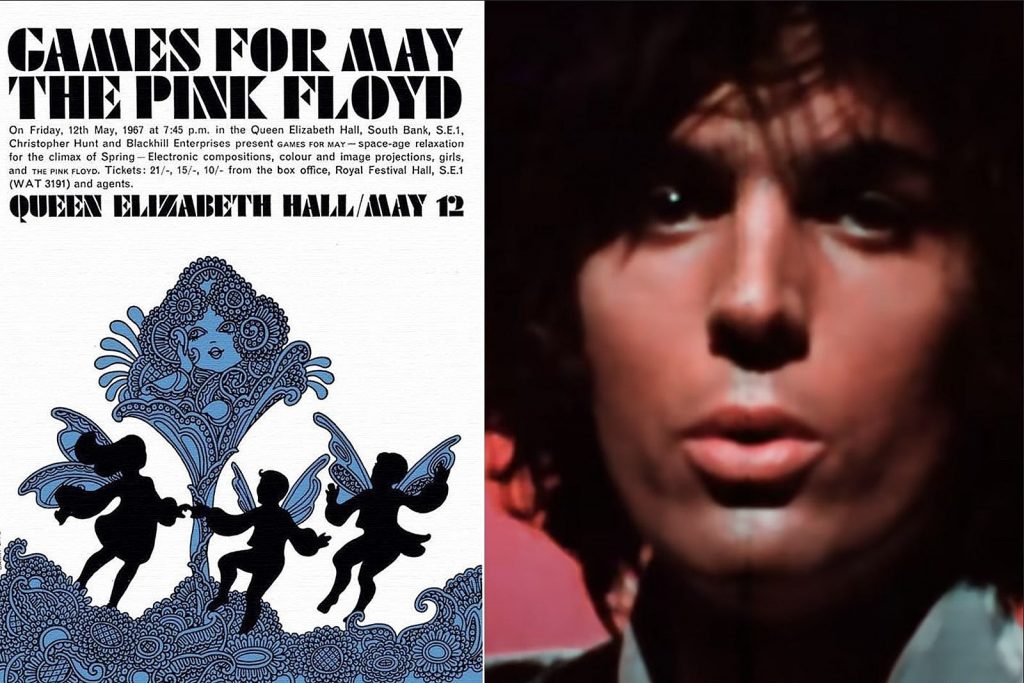 The first-ever surround-sound concert on May 12, 1967, was both predictably by space-rock pioneers Pink Floyd and predictably very lo-fi.

They’d already set new standards for London’s drug-fueled musical “happenings,” playing lengthy, sometimes quite odd Syd Barrett originals while projections of rudimentary light displays, weird films and other psychedelic imagery swirled around the venue. “I was always interested in the possibility of rock ‘n’ roll, how to fill the space between the audience and the idea with more than just guitars and vocals,” bassist Roger Waters said in Barry Miles’ book Pink Floyd: The Early Years.

The tech was as improvised as the songs back then. Still, these initial explorations made Pink Floyd the perfect candidate for a larger-scale multimedia event being organized by Christopher Hunt, an avant-garde-leaning concert promoter.

He planned to put on the show dubbed Games for May at the Queen Elizabeth Hall, an upholstered, usher-managed classical-music venue in the tony South Bank performing arts district – but this wasn’t going to be an upscale affair. Instead, Hunt’s promotional material promised “space-age relaxation for the climax of spring – electronic compositions, color and image projections, girls and THE PINK FLOYD.”

The pressure was on to meet what were suddenly very high expectations, even as Pink Floyd rushed to complete their 1967 debut, The Piper at the Gates of Dawn. They decided to build on a studio experiment from a few weeks earlier at EMI’s Abbey Road, where an engineer connected another set of speakers to the principal stereo monitors and created a crude form of surround sound. They’d need to drag in their equipment since most venues in London were still designed for mono playback – and they’d need someone to handle mixing this new four-way system.

Pink Floyd turned to Abbey Road engineer Bernard Speight, who designed a primitive joystick that distributed sound to the corners of the room through their new quadrophonic rig. Called the Azimuth Coordinator, the contraption was controlled by Pink Floyd keyboardist Richard Wright, who placed it on top of his organ during their shows.

“The sounds traveled around the hall in a sort of circle,” Waters said in Saucerful of Secrets: The Pink Floyd Odyssey, “giving the audience an eerie effect of being absolutely surrounded by this music.”

Myriad sounds were also recorded and then collected on four-track tapes to be fed through the Azimuth Coordinator. Waters provided several early hints at how he’d use effects by recording synthetic bird sounds (later heard on “Cirrus Minor” from More and then “Grantchester Meadows” from Ummagumma), edge tones off cymbals (the title track from Saucerful of Secrets) and maniacal laughter (The Dark Side of the Moon).

Their set lasted about two hours, beginning with a dramatic simulated sunrise as Pink Floyd’s lighting crew showered everything in red. Included was jam-friendly fare like “Interstellar Overdrive,” from their forthcoming debut, as well as a new Barrett song that shared the name of the event, “Games for May.”

“If the joystick was upright, the sound was centered, but moving it diagonally would dispatch the sound to the speaker in the equivalent corner of the hall,” drummer Nick Mason wrote in his 2005 autobiography Inside Out. “Rick could send his keyboard sounds swirling around the auditorium, or make footsteps — supplied from a Revox tape recorder — apparently march across from one side to the other.”

They didn’t limit the sound effects to recorded material. Waters tossed potatoes at a gong, while Mason sawed a log. Elsewhere, Barrett could be found using a plaster ruler as a slide on his guitar. “In the future,” Barrett argued back then, “bands are going to have to offer more than a pop show. They are going to have to an offer a well-presented theater show.”

A contemporary review from the Financial Times called Pink Floyd’s set “the noisiest and prettiest display ever seen on the South Bank.” But not everyone was duly impressed: Their idea to fill the Queen Elizabeth Hall with bubbles while members of the crew handed out daffodils ended up backfiring spectacularly. The combination permanently stained several new leather seats, and Pink Floyd were promptly banned from future shows at the venue.

Then someone stole the Azimuth Coordinator, forcing Speight to create a second edition. This time he added two 90-degree joysticks, one to control the sound effects and another to distribute Wright’s organ sounds.

“Games for May” arrived as a stand-alone single before The Piper at the Gates of Dawn, but with a new title. “See Emily Play” would become Pink Floyd’s first Top 10 U.K. hit, while they continued to experiment with live sound. They even tried a novel six-speaker set up along the way, but the old dual-channel controller remained – even after Pink Floyd hurtled to international fame after The Dark Side of the Moon.

Little surprise then that Mason still raves about this signature concert. “Games for May was a very important show,” he told Mojo, calling it the “beginning of the concept we spent the next 20-odd years doing.”