Praise From Rockers Over the Years 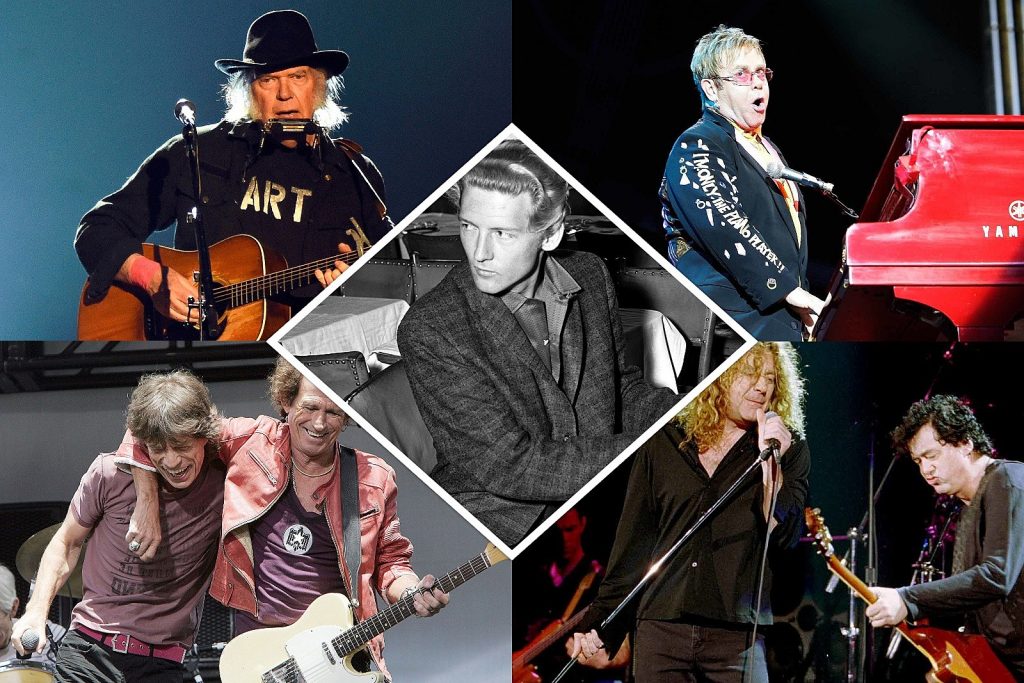 Jerry Lee Lewis played a pivotal role in the development of rock ‘n’ roll. With a series of late-’50s smash hits — including “Whole Lotta Shakin’ Goin’ On,” “Great Balls of Fire” — and his wildman stage persona, the artist aptly nicknamed the Killer helped usher the fledgling genre into the mainstream alongside other first-generation rockers like Elvis Presley and Little Richard.

Lewis, whose death was announced on Oct. 28 at the age of 87, led a tumultuous life and career full of popularity dips and personal scandal — most infamously, his marriage to his 13-year-old cousin Myra Gale Brown, which derailed his career as quickly as it had taken off. The relationship made Lewis persona non grata in the music industry for roughly a decade, until he successfully reinvented himself as a country artist in the late ’60s and ’70s.

Despite his failures and professional hardships, Lewis had a seismic impact on other rockers of all stripes. Read on to see what some of them have said about Lewis over the years.

Joe Elliott:
“Without Elvis, there wouldn’t have been a plethora of other bands that were more of an influence on us. So we all think of him as the daddy of everything — with Jerry Lee [Lewis], Roy Orbison. They’re important, even if we don’t own a ton of their records we’re very aware of their value.” (Forbes)

John Fogerty:
“Jerry Lee Lewis is a little more… um… distant, I guess you would say. You just feel like you’re walking on eggshells a little bit. So you… you’re very careful. Which I was, anyway.” (MyRadioLink)

Billy Idol:
“I was still a big fan of old rockabilly, ’50s doo-wop and rock, especially the stuff the infamous Morris Levy was reissuing on his Roulette label in the early and mid-’70s. It was pretty fantastic hearing Little Richard’s Specialty sides or Jerry Lee Lewis’ Sun recordings, plus Roy Orbison, Johnny Cash, Frankie Lymon and the Teenagers, Gene Chandler’s ‘Duke of Earl,’ and the Cadillacs’ ‘Speedo.’ It was a great relief to hear this rhythm-based music, short and to the point. The antithesis of the bloated prog rock of the ’70s.” (Dancing With Myself)

Elton John:
“I heard Little Richard and Jerry Lee Lewis and that was it. I didn’t ever want to be anything else. I just started banging away and semi-studied classical music at the Royal Academy of Music but sort of half-heartedly. I was never really interested in it.” (Rolling Stone, 1973)

“Jerry Lee Lewis was always a big influence on me. He’s the best rock ‘n’ roll pianist ever. I couldn’t play like him because he’s too fast.” (Elton)

Graham Nash:
“Talk about energy. Jerry Lee Lewis was very dangerous on many levels. There were rumors that he had killed a couple of people – you know, people say stuff. What ruined Jerry in England, when he lost people, was when he married that 14-year-old girl. That was a little too over the top for us.

“But ‘Great Balls of Fire’ – man, what an exciting song! I remember hearing the Sun Sessions and how Jerry Lee was reluctant to do the song. Sam Phillips was on him: ‘C’mon, Jerry Lee. You played it at soundcheck.’ ‘Oh, no, no, no. That’s the devil’s music. I can’t play that song.’ Sam stayed on him until he finally did it, and that’s the record they cut. Unbelievable energy.” (Musicradar)

Jimmy Page:
“On this day in 1962, I saw Jerry Lee Lewis at the Majestic in Mitcham.
⠀⠀
“In 1958, Jerry Lee Lewis toured for the first time in the UK. He had to cancel the tour and leave due to the newspapers’ treatment of him.

“On May 14, 1962, he’d returned to England and played a date at the Majestic, in Mitcham. I had no money to see him the first time around but scraped up enough money to go and see his comeback at Mitcham. It really was the most extraordinary evening. It felt really tribal: with all the diehard lovers of rock ‘n’ roll paying homage to The Maestro.
⠀⠀
“It would have been easy to assume that Jerry Lee would have a sour taste for playing in the UK after his untimely exit in ’58, but he played with so much conviction and passion of what he, and only he, could do best: which was to be Jerry Lee Lewis.

“At the end of the show, Jerry Lee Lewis brought his wife on the stage and the enthusiasm from the audience could have literally brought the ceiling down. The technique of Jerry Lee Lewis on the piano throughout his career has been something that was so individual and unequaled. Like Chuck Berry, you don’t need to hear too many bars to know who it is that’s playing.” (Facebook)

On recording with Jerry Lee Lewis:
“I had been asked to appear on the Jerry Lee Lewis album, Last Man Standing. Steve Bing was financing, Jimmy Rip was producing and they wanted me to overdub guitar parts and solo on a re-recording of Led Zeppelin‘s ‘Rock and Roll.’

“When I had just hit my teens, it was from rock and roll pioneers of the ’50s like Lewis and the likes of Roland Janes (the guitarist that played on the early Sun sessions with Lewis) that I learned to play – for these were the guys that really kicked things off. I was really determined to throw in my best performance for Jerry Lee, I owed him that.

“During this period, I had been rehearsing with some musicians when Jimmy Rip arrived to engineer my contribution. I had thought my performance might be recorded in this ambient setting. But instead, I had to plug into the computer to record my bits. I could hear Jerry Lee in my headphones belting out a hot version of ‘Rock and Roll,’ somehow I just didn’t pull it off the way I’d hoped. The experience left me thinking that I’d have liked to have been in the studio on the original session with The Killer!” (Instagram)

Keith Richards:
“Jerry Lee, what a gent. I’ve been listenin’ to him since ‘Crazy Arms.’ He’s part of my staple diet. As necessary as vegetables are. He’s just been around. What a gent. First I fly to L.A. at night [to do the Dick Clark special], and who do I see sittin’ on his suitcase waiting for his car but Chuck Berry, who I haven’t seen since he blacked my eye out at the Ritz. I believe he didn’t recognize me [when he punched me].

“It’s great, ‘cuz after that incident he played with Ronnie [Wood], and he thought he was me, so he apologized to Ronnie! So I knew his general feeling. That was very sweet, we do look alike. And here’s Chuck sayin’, “I’m sorry, I didn’t know it was you I hit, my nerves were flyin’,” and we’re talkin’ while he’s waitin’ for his car, and he gives me his number.

“At the same time, he lights a cigarette and drops it down my shirt and almost burns my stomach open! My shirt’s on fire! Every time him and me get in contact, whether it’s intentional or not, I end up wounded. But, I mean, if somebody’s gonna do it to me, I’m glad it’s him. He was a sweetheart about it. And I said, ‘Chuck, if it was possible to give you a black eye, I’d do it.’  But it wouldn’t show up.

“So I was thrown into this old rock ‘n’ roll syndrome. First Chuck Berry, and then Little Richard [also a guest on the Dick Clark special], who I hadn’t seen for many years, and of course, Jerry Lee. And the weird thing is that for some reason, I decided to be real colorful that day. Hey, it’s California, with an early-morning rehearsal, 9, 10 o’clock — early for me — and I decided to wear this turquoise T-shirt, shades, black jeans, and white shoes. I’m gonna play some rock ‘n’ roll today.

“But I don’t know what I’m in for. I walk into the studio and there’s Jerry Lee in exactly the same costume — turquoise T-shirt, black jeans, white shoes, and shades. It’s one of those strange little anecdotes that usually only happens in movies.” (Spin, 1985)

Robbie Robertson:
“With Jerry, there was a genuine feeling of danger about him, and that was part of the excitement. I’m not saying he was on all the time, just that he carried some shit around with him that you went, ‘Wooooooo.’ You never knew if something was going to make him laugh or cry or get angry. But the important thing was the music. I used to watch him in those little honky-tonks, and there was music coming out of his every pore. Everything he did was musical. Everything he did was in time.” (Rolling Stone, 2006)

Leon Russell:
[On touring with Jerry Lee Lewis:] “Well, it was still the last era of Blackboard Jungle and I remember Jerry Lee in Cheyenne, Wyoming. The band was really playing and he was standing up on the piano bench singing and watching 75 people fight in the audience, just chasing around and running all over the audience. Pretty soon they all advanced on the stage when they got tired of fighting with each other, and the curtains were pulled and we made a mad scramble out to the cars and packed up as many instruments as we could and got out of town.” (Rolling Stone, 1970)

Bruce Springsteen:
[Introducing Jerry Lee at the Rock & Roll Hall of Fame grand opening concert in Cleveland in 1995:] “… One of my all-time heroes, the one and only, the man who doesn’t play rock ‘n’ roll, he is rock ‘n’ roll: Jerry Lee Lewis.”

Paul Stanley:
“The wildness and danger of somebody like Jerry Lee Lewis wasn’t lost on me as he kicked his piano stool away and flung his hair around. What was lost on me was the sexuality of the music — not surprisingly, given what I saw at home.” (Face the Music)

Angus Young:
“Ah’ve always seen people like Chuck Berry duckwalking and Jerry Lee Lewis stripping off, so I decided I would wear [my schoolboy] outfit for a bit of fun. If I went on stage like this [jeans and t-shirt], I’d look dumb. That outfit does me justice! I can pull the hat over my head and hide me face; I can show me knees; I can flash me arse. Me bum’s about the best side of me.” (Classic Rock, archived from 1977)

“He was singing about balls before we did, you know, ‘Great Balls of Fire.'” (VH1)

Neil Young:
“No predictable white chops like Jerry Lee. As great as Jerry Lee was, he could never be Little Richard. How’s the Killer doin’? Is he bitter? Always had a chip on his shoulder. Had his feelings hurt at a tender age. Very confused about religion and women. That Baptist upbringing, that overbearing thing, with the spirit of rock and roll — a fuckin’ unbelievable combination. He’s one of the seminal forces. When you listen to him now and you go back to those days, it’s Jerry Lee and Little Richard. That’s what it is. Elvis was comin’ in a distant third when you get right down to it.” (Shakey)

There’s a whole lotta shakin’ (and more) goin’ on here