Rescued David Bowie Painting Will Sell for 10,000 Times its Price 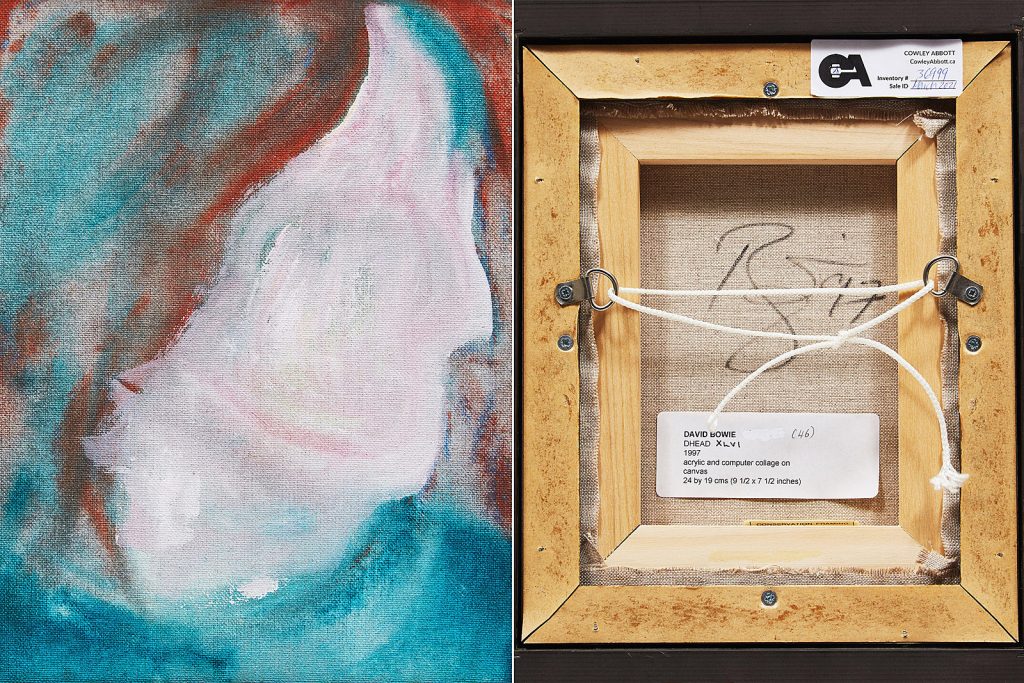 A woman who paid five Canadian dollars ($4 USD) for a David Bowie painting looks likely to make more than 10,000 times that amount when it sells at auction next week.

Canadian auctioneers Cowley Abbott have already attracted bids over $50,000 CAD for the 1997 work, which she discovered at a donation center outside a landfill site north of Toronto.

Described as a “semi-abstract portrait,” the painting, authenticated by Bowie archivist Andy Peters, is titled “DHead XLVI” and it’s one of around 47 similar pieces Bowie created in the ‘90s. Rendered with strong red-brown and teal tones, the face of the subject is left without detail, meaning it’s uncertain who it was intended to be. The auctioneers had originally predicted a purchase price of between $9,000 and $12,000 CAD (around $7,350 to $9,800 USD) for the “acrylic and computer collage” creation, which measures 9.5in x 7.5in.

“Like many musicians, Bowie studied art and design as a young man, which would foster a love of fine art throughout his lifetime,” Cowley Abbott said on the auction page. “He was also a passionate collector and painter, heavily influenced by the modernist art trends of the twentieth century… Between 1995 and 1997 Bowie created a series of approximately 47 works on canvas which he entitled ‘Dead Heads’ (or ‘DHead’). Each title included a non-sequential Roman numeral. The sitters ranged from band members, friends and acquaintances and there were also some self-portraits. It has been suggested that, for some of these important paintings, Bowie drew inspiration from the Ziggy Stardust era.”

Looking back on his decision to go public with his own artwork in 1994, Bowie said later: “I’m not sure why I made that choice, and I’m still to this day not sure if it wasn’t a mistake… Up to that point, painting for me was private, and it really was about problem solving. I’d find that if I had some creative obstacle in the music that I was working on, I would often revert to drawing it out or painting it out. Somehow the act of trying to recreate the structure of the music in paint or in drawing would produce a breakthrough.”

He added: “I find I’m bearing in mind how people respond to the art, which has produced a separation between the visual and the musical. I’m not sure that that’s a good thing. But I went into it with my eyes wide open. I expected ridicule – and I got it!”