‘Revenge of the Nerds’ Movies Ranked 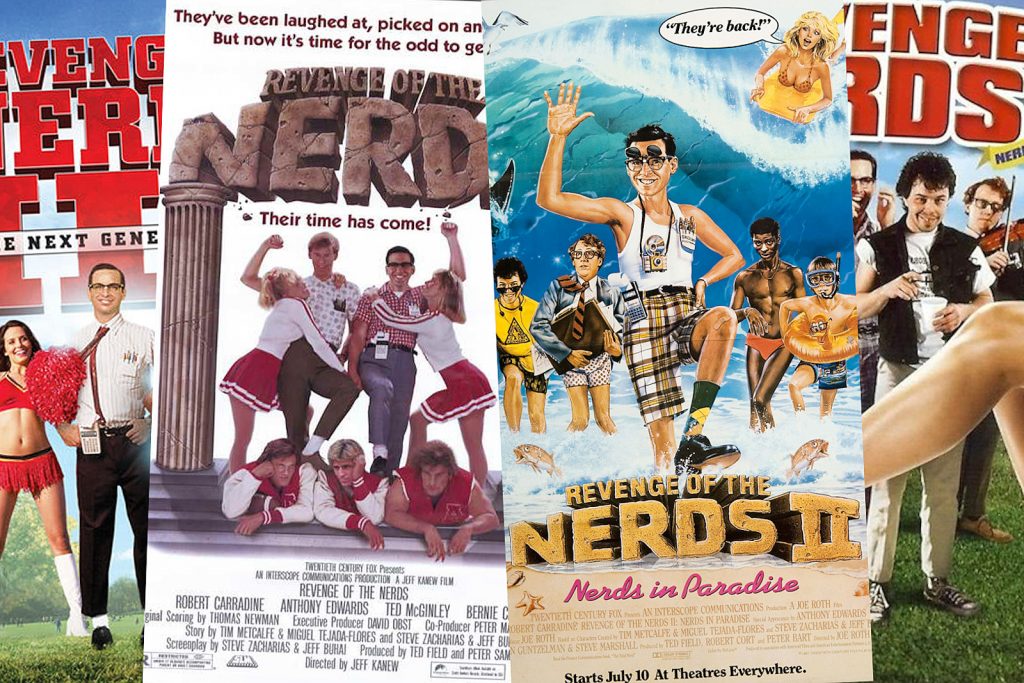 It’s safe to say that in the modern world, declaring that you’re a nerd is one of the coolest things you can do.

Celebrities ranging from Pharrell Williams and John Mayer to Aisha Tyler have all proudly proclaimed their nerd-dom. The on-and-off again richest man in the world is encouraging everyone to be a nerd if they want to be successful, Conservative political commentators are declaring things like “Be nice to nerds. You may end up working for them,” and even the former chairman of the Federal Reserve – one of the stuffiest positions in all of our government – noted that he was “very proud” to be counted among their ranks.

But it wasn’t always this way. In the ’80s, when use of the word became widespread for the first time, it was almost always used as a pejorative. It was a pre-internet age, and being interested high-tech gadgets – like computers(!) – was often seen as the mark of a social pariah. That is, until the Revenge of the Nerds movie franchise set about trying to change all of that.

When the first film was made in 1984, it really did seem like in movies and television, as Homer Simpson once said, “There are two kinds of college students: jocks and nerds.” As Homer knew, the jocks, and their close cousins, the preppies, were almost always portrayed as cool, while the nerds were often portrayed as the losers. What Revenge of the Nerds and its sequels tried to do was reverse the polarity of that equation, making the nerds the heroes and the jocks and preppies the losers.

In retrospect, the franchise probably didn’t have much to do with the eventual ascendancy of nerd culture, particularly when compared with the galactic financial success of Silicon Valley – the people making a lot of money are almost always the ones a society deems to be cool. But it’s still fascinating to look back at the dawn of the current era and remember how different things once were.

It’s in that spirit that Ultimate Classic Rock presents a ranking of the four films in the franchise.

Serving as a prime example of the adage that chasing trends instead of trying to set them always leads to disaster, Nerds in Love is the weakest film in the franchise and the one that put it out of its misery. While most of the cast is back once again – the film tells the story of “Booger” (played by Curtis Armstrong in all four of the films), who is scheduled to get married to a rich girl, only to find out that her wealthy family and friends hate all nerds – this made-for-TV film is only notionally a comedy. Gone are most of the the last remnants of raunchiness and childish gags that provided the first two films with their occasional belly laughs. They’ve been replaced by a tepid class warfare tale (several years after those were already going out of style on the big screen) and a series of the kind of sentimental plot points about understanding one’s identity and accepting difference that already felt dated in 1994. By that point in the decade, the world of computers was no longer the domain of nerd stories – tech thrillers like The Net and Enemy of the State were already becoming popular, and in half a decade The Matrix would appear, forever changing our culture’s relationship with the internet – and to be successful, comedies either had to take their raunchiness to new heights like There’s Something About Mary, or engage in new layers of meta-storytelling, like The Cable Guy or The Big Lebowski. In that atmosphere, there just wasn’t much interest in a slightly preachy story about nerds trying to convince people that they were okay.

If you think you’re sensing a theme here – that each successive Revenge of the Nerds film is not as good as the last – you’re right. By 1992, the ’80s moment that had given birth to the franchise was little more than a speck in the rear-view mirror. This was, after all, the year of films like Singles, Reservoir Dogs and Army of Darkness, all of which were drenched in the new ’90s aesthetic of super-cool irony. But the Nerds franchise gave it a shot anyway, with the made-for-TV The Next Generation. As the title indicates, there’s a new generation of nerds at Adams College, and at first, everything’s kosher. The nerds are respected by their frat-bro rivals, and Lewis Skolnick (Robert Carradine) has become the chair of the Computer Science Department, although he’s trying to turn his back on his nerd past. But when a new set of jocks shows up on campus, Lewis is forced to decide what he wants his true identity to be, and the younger nerds once again have to prove themselves by going on a “nerd strike” which cripples the city’s tech-dependent services. Everything here is toned down to the level of banality – including the film’s muted attempts at political correctness – and even Lewis’s identity crisis feels smuggled in simply for the purpose of giving him something to do.

The original Revenge of the Nerds was a surprise hit and spawned a host of imitators, like Real Genius and Weird Science. So, three years later, the nerds made a reappearance in Nerds in Paradise. Most of the cast is back, except for Julie Montgomery, who played Lewis’s love interest Betty in the first film, and Anthony Edwards, who only agreed to appear in three scenes after his career-making turn in Top Gun the year before. Edward’s absence is a particular detriment to the film, robbing it of the central friendship that undergirded its predecessor. Beyond this, the plot is a full step more ridiculous than the first film, and revolves around a spring break fraternity conference in Florida. There, the nerds once again compete with their rival fraternity, the evil Alpha Betas, get lost in a swamp, perform a rap/rock song at a talent show and end up commandeering a Cuban army amphibious assault vehicle. Although there are some memorable moments (such as when their primary antagonist, Ogre, himself becomes a nerd) in almost every way it’s a worse film than the first.

The original film is clearly the best of the lot and is warmly regarded by many connoisseurs of ’80s culture. We should get the downsides out of the way first: like a large number of the comedies from that decade, it trades in broad stereotypes of gays and minorities, and tends to see women as having value mostly because they have breasts and might be willing to help you lose your virginity. It’s also remarkably crass, stuffed full of juvenile jokes about sex, drugs and bodily functions. Having said that, there’s also a surprising tenderness to the movie. Revolving around the friendship between Lewis Skolnick (Robert Carradine) and Gilbert Lowe (Anthony Edwards) two freshman computer science majors who want to try to start a fraternity at the fictional Adams College, only to find that mission opposed by a rival, jock-infested fraternity, it tells a classic ’80s underdog story. With a memorable cast of characters, along with appearances by John Goodman and James Cromwell, the film opens a memorable window onto the world of the ’80s, when dominant preppy culture still did need to be overthrown.