Revisiting Tears for Fears’ ‘Everybody Wants to Rule the World’ 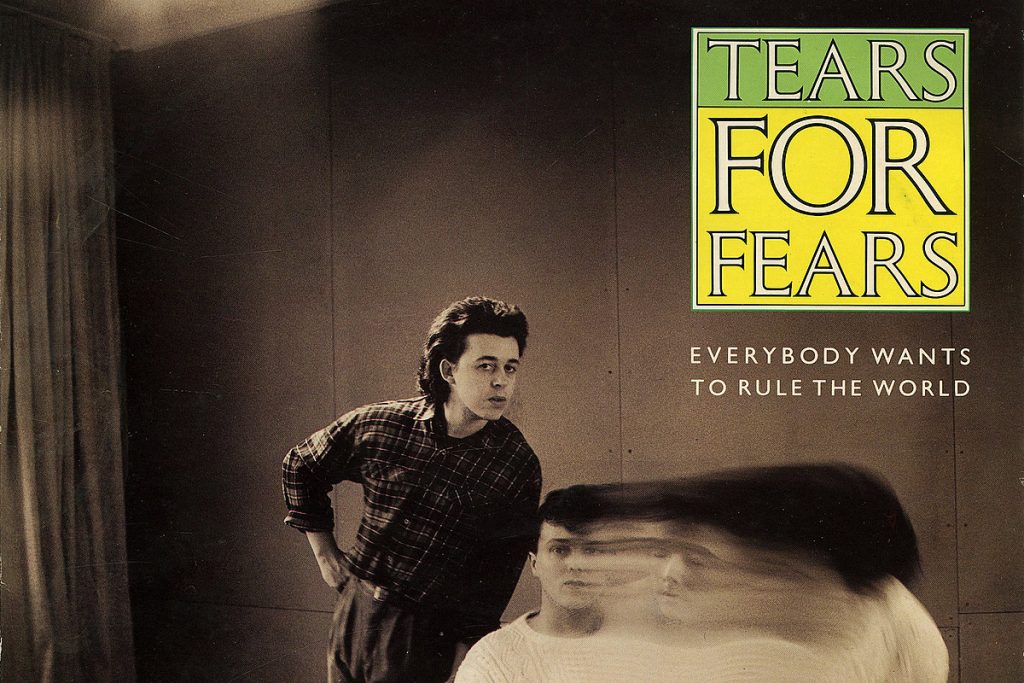 Tears for Fears were under intense label scrutiny throughout the recording of their sophomore album. The Hurting, the group’s debut, went to No. 1 in the U.K., and reached the Top 20 in four other countries. There was momentum to keep, and America still to be conquered.

At first, the studio suits wanted more of the same. Then they drilled in on a possible hit single.

Tears for Fears pushed back – hard.

“There was record-company pressure after the first album,” singer Curt Smith told the Los Angeles Times in 1985. “It was successful worldwide and they wanted us to do another album, no matter what the quality – just as long as we did it quickly. But we weren’t willing.”

The sessions began to drag on, as producer Chris Hughes, keyboardist Ian Stanley and principal songwriter Roland Orzabal tinkered at Stanley’s tricked-out home studio. They intended to make a different statement this time.

The Hurting, recorded when both Smith and Orzabal were just 21, “was a much more adolescent album,” Orzabal told the Morning Call in 1985. “Songs From the Big Chair shows more maturity; this is us becoming men.”

At one point, they scrapped a bunch of it. “We started an album at the end of 1983, but we didn’t like it,” Smith told the Times. “It was too much like the first one, and we were determined to do something different.”

Finally, more than a year later, Tears for Fears felt like they’d created a complete vision. “Shout” would anchor the project, with cuts like “Mothers Talk” and “Head Over Heels” positioned as future singles. Then Hughes heard Orzabal fooling around with a couple of chords on guitar one day. “Everybody Wants to Rule the World” was being born.

“I just had a rhythm on a rhythm machine, and had an acoustic guitar with the bottom string tuned down,” Orzabal told the Orlando Sentinel in 1985. “I really didn’t think it would be a hit.”

The song was completed in a matter of days by Orzabal, Hughes and Stanley, who each received co-writing credit. “If it wasn’t for Chris, I don’t think ‘Everybody Wants to Rule the World’ would even be a song,” Orzabal told Super Deluxe Edition in 2020. “He pushed that, 100 percent. I didn’t like it, even though I came up with the main body of the song.”

Smith entered into the process later. “I came in one day, and they’d actually written this song around this beat and it was very commercial,” Smith told Consequence of Sound in 2014. “So, they said, ‘Here it is; you’re singing it. Go and do it.’ So, I did.”

Still, Orzabal seemed reluctant at every stage, adding that the shuffle beat was “alien to our normal way of doing things. It was jolly rather than square and rigid in the manner of ‘Shout,’ but it continued the process of becoming more extrovert.”

Watch Tears for Fears’ ‘Everybody Wants to Rule the World’ Video

Orzabal’s lyrics ended up touching on a wide swath of contemporary issues, after he changed the title from “Everybody Wants to Go to War.” Still, nobody in the band took it too seriously. Their breakthrough U.S. single was tucked away on Songs From the Big Chair, where they expected it to become forgotten.

“We’re talking back in the days when you made albums and not singles and pillow tracks,” Smith told Consequence of Sound in a separate interview. “So, it became, not necessarily a concept project, but you would have looked for something that was a complete body of work that works well together – and we felt that’s what it was by the time we had done ‘Everybody Wants to Rule the World.'”

Even the post-production process was completely different for this track. They spent four days on “Shout” alone, mixer David Bascombe told Mix in 2007. “With the other songs, there was a lot of second guessing, making sure every sound was really pushing the band,” he added. “But this was more straightforward.”

Tears for Fears issued “Shout” as the album’s debut single, before their U.S. label intervened. They thought “Everybody Wants to Rule the World” would work better in America. Once again, Tears for Fears pushed back.

“‘Shout,’ everywhere else in the world, was actually the first single, and to everyone in Europe and to us at the time, we thought that was the obvious single,” Smith told Consequence of Sound. “We actually disagreed with the American company who made ‘Everybody’ the first single.”

Released on March 18, 1985, “Everybody Wants to Rule the World” arrived at just the right moment in the U.S. A different generation was beginning to examine environmental issues (“turn your back on mother nature“), turbulent financial times (“help me make the most of freedom and of pleasure, nothing ever lasts forever“), the Cold War (“holding hands while the walls come tumbling down“), ineffective leaders (“I can’t stand this indecision, married with a lack of vision“), disinformation (“one headline, why believe it?“) and, of course, governmental overreach.

A relatively new television network devoted to music videos also provided an important platform. “Everybody Wants to Rule the World” became a Top 5 hit in eight countries, going to No. 2 in the U.K. and topping the charts in America – despite being “quite serious,” Smith later told MTV. “It’s about everybody wanting power, about warfare and the misery it causes.”

After all the disagreements with their label, Smith had to admit it was “interesting in retrospect – because it was one of those times when the record company was right and we were wrong,” he told Consequence of Sound. “For America, yes, it was a better first single.”

More than that, “Everybody Wants to Rule the World” helped make Songs From the Big Chair into a career-best multi-platinum smash, one that deftly mirrored the age. “As we move further and further from that decade and you keep hearing ‘Everybody Wants to Rule the World” in various forms, I do think it is an era-defining album,” Orzabal said as Tears for Fears prepared a limited-edition 35th-anniversary reissue.

Ironically enough, however, Orzabal became immediately dissatisfied when he finally came to rule the world – or the pop world, anyway.

“When you have a pipe dream that becomes a reality, it tends to make you feel that nothing is out of your reach,” Orzabal told the Morning Call. “I mean, I’m only 23 and nearly everything I’ve wanted, I’ve gotten. That changes your approach. Now that we’re pop stars, I don’t think being a pop star is the ultimate. There has to be something more.”