Revisiting the Sci-Fi Tragedy of ‘V: The Series’ 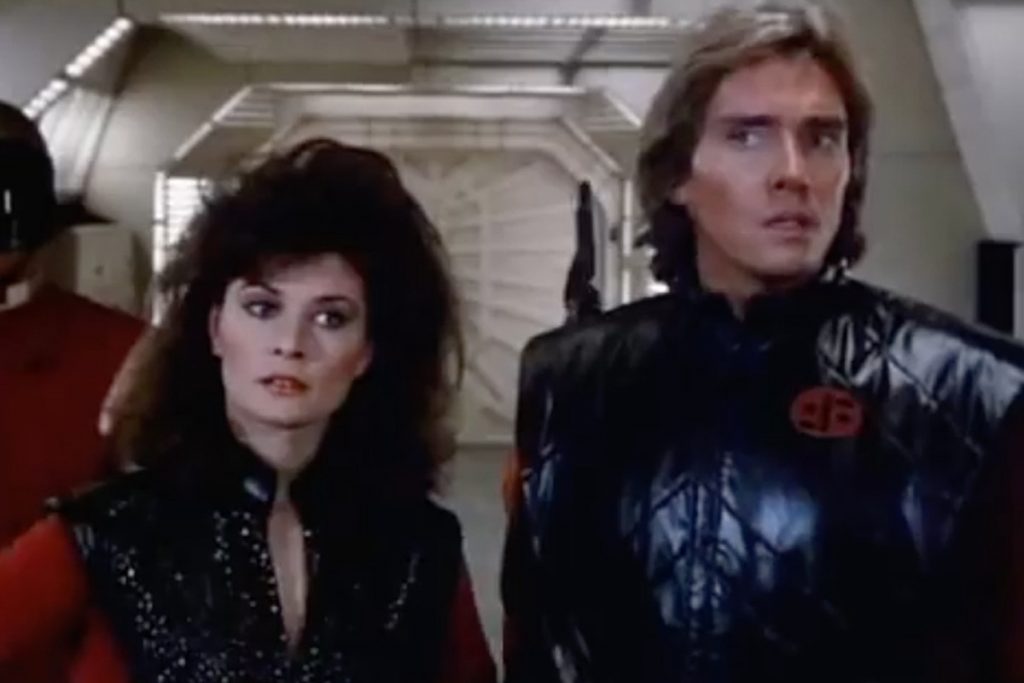 The final episode of V: The Series aired on March 22, 1985, marking the culmination of a great tragedy of ’80s television.

The series, which didn’t even last an entire season, transformed a potentially amazing sci-fi franchise into a bad soap opera — and then burned it to the ground.

All of this took only two years. The first V was a two-part NBC miniseries created by Kenneth Johnson — a veteran of The Six Million Dollar Man, The Bionic Woman and The Incredible Hulk — and aired on the first two days of May in 1983. In retrospect, this iteration holds up surprisingly well, despite the technological impairment of its special effects. It tells the story of several Los Angeles citizens who wake up one day to find that 50 enormous flying saucers have moved into place above major cities all over the world. The central characters are a news cameraman named Mike Donovan (Marc Singer, from the 1982 cult classic Beastmaster) and a biologist named Julie Parrish (Faye Grant).

When the aliens — or “Visitors” — announce they’re here peacefully, Mike and his crew are invited aboard one of the ships and discover that the aliens look just like we do. Julie and several other scientists, however, start to have doubts, wondering if the Visitors and their mission can really be so cordial.

As the aliens’ deception becomes clear, so do the political roots of the narrative. Johnson based the story on Sinclair Lewis’ 1935 anti-fascist novel, It Can’t Happen Here, which follows radical authoritarian Berzelius “Buzz” Windrip, who rises to power in the U.S. by declaring his allegiance to traditional American values and promising a return to American greatness. Buzz defeats Franklin Delano Roosevelt in the presidential election and immediately sets about making himself into a dictator, putting people who disagree with his politics into concentration camps, abolishing Congress and establishing a paramilitary force that cements his control over the populace.

In V, these plot elements are expanded through an added layer of reference to the Nazis and World War II. By the time, Mike learns that the aliens are not like humans at all but actually lizard-like creatures wearing fleshy disguises — and they’ve already consolidated their power over Earth. They’ve stoked fear by claiming to discover a nefarious plot among human scientists, using that as an excuse to disappear anyone who suspects the truth. This leads to many scientists going into hiding. The series turns this into a direct reference to the Jewish experience during WWII, which is made explicit by a Holocaust survivor (Leonardo Cimino, who, in an interesting historical twist, was a veteran of the assault on Normandy in 1944) who forces his family to shelter the family of a scientist wanted by the aliens — the way his own family was sheltered from the Nazis.

Eventually, there’s no choice but for the humans to set up a resistance movement, led by Julie. Their goal is to retake Earth from the aliens, who, it’s been revealed, are really here to steal the planet’s water and use the humans as a food source. The miniseries ends on a cliffhanger, with the Visitors in control of the planet and the humans desperately sending signals into space, hoping for help from some other star system.

This was so successful that a year later, in May 1984, NBC released a follow-up, three-part miniseries called V: The Final Battle. The show followed the ongoing struggle between the Visitors and the Resistance while introducing a host of new twists, including a “Fifth Column” of aliens who join the resistance, an intricate “conversion” process by which the Visitors make humans into mental slaves, a host of spy-move staples like truth serums and suicide pills, a plot by the Visitors to steal all the water from Southern California, a “Red Dust” full of bacteria that can kill the Visitors and a half-alien/half-human woman with the requisite superhuman powers that always seem to come with being such a person in such a show.

It’s another tasty piece of camp confection: at once ridiculous and entertaining, with a strong sci-fi conceptual core. It was equally as popular as its predecessor, and this success convinced NBC to go ahead with a full-blown series, which launched in October of that year.

Unfortunately, but perhaps predictably, the show was a disaster. Compelling if campy plot twists from the two miniseries became a mess of meaningless melodrama. Characters made inexplicable choices, the only possible purpose of which was to fuel the next week’s episode. Budgets were tight, resulting in too-quick shooting schedules and the use of so much stock footage that audiences were sometimes shown the same explosions or scenes of approaching alien ships two or three weeks in a row.

Still worse, the actors in V: The Series, working under the twin pressures of disastrous writing and a hyper-speed shooting schedule, were unable to turn in much more than soap-opera-level performances. Their characters are killed at random, or just mysteriously fade away for no reason. Michael Ironside, cast in the series as Ham Tyler, a mercenary and assassin turned freedom fighter, leaves for Chicago halfway through and simply never returns.

Robert Englund — who eventually joined the pantheon of genre immortals with his portrayal of Freddy Kruger in the Nightmare on Elm Street series (the first of which was released in the fall of 1984, shortly before the series began its run) — plays a Visitor named Willie. In the original miniseries, he’s an interesting character: a gentle, befuddled creature who eventually succumbs to his better angels and joins the resistance. By the end of the TV series, like much of the rest of the cast, he’s been reduced to a garden variety moral simpleton who seems to have learned nothing from his time on our planet other than the earthlings’ enjoyable habit of kissing to show affection.

In the end, things got so bad that NBC cancelled the series after episode 19 of a 20-episode run, resulting in a maddening conclusion to the whole.

The viewers are introduced in fateful episode 19 to the idea of the all powerful Leader of the Visitors, who’s finally arrived on Earth to settle things once and for all. We don’t see him, but he takes the half-alien/half-human character into his ship and (along with her boyfriend, who stows away) departs to the stars with the promise of showing her, and us, the cosmic truth of the universe. Meanwhile, down on Earth, one of the bad guys notifies us she has put a bomb on the ship. And, because they cancelled the show there, never even filming the finale, that’s how things end.

It’s a sad, sordid tale of Hollywood failure, which wasn’t made much better by the reboot of the series in 2009, which lasted for two mostly mediocre seasons.

The most distressing thing about it, however, is the squandering of so many interesting ideas from the original miniseries. An enormous amount of the science fiction of the past 30 years was anticipated there, including the main gag of They Live, virtually the entirety of Independence Day, a good deal of the political and sociological structure of the Battlestar Galactica reboot and one of the central tropes of The Matrix (that of another civilization putting us in coffin-like containers and using ours for sustenance), among others.

To be fair, V in turn has its predecessors in Soylent Green, the famous “To Serve Man” episode of the original Twilight Zone, The War of the Worlds and The Day The Earth Stood Still, among other projects. But watching the show now, you see all these ideas developing in the context of our most modern preoccupations — the rise of fascism, the fear of immigration, environmental catastrophe — and then entirely squandered.

In this light, maybe it’s fitting that the last line aimed at our hero Mike Donovan — uttered by an alien resistance leader who’s become Mike’s pal — is this gem of excremental dialogue: “You’ve got a great planet here, Mike. You fought valiantly to save it. Don’t misuse it.”