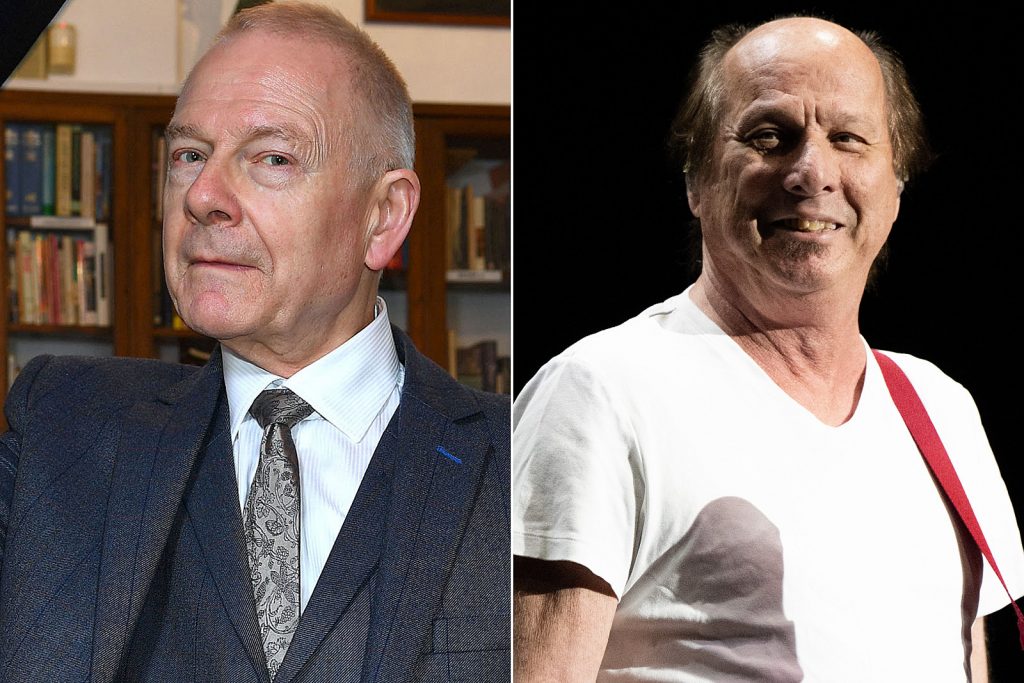 Last weekend’s London screening of the new King Crimson documentary, In the Court of the Crimson King: King Crimson at 50, brought bandleader Robert Fripp out to address several topics for the audience, including his schism with former guitarist Adrian Belew in recent years.

Belew, who first joined King Crimson in 1981 after tenures with David Bowie and Talking Heads, was part of on-and-off incarnations of King Crimson through roughly 2008, including the Double Trio of the mid-to-late ’90s and a 40th-anniversary tour with a quintet that included longtime bassist Tony Levin and a pair of drummers, Pat Mastelotto and Gavin Harrison.

Fripp put the band on hiatus in 2008, reviving it in 2013 with a trio of drummers and Jakko Jakszyk, with whom Fripp began working during the early 2010s, on vocals and guitar.

“Getting left out of King Crimson after 33 years was certainly a giant disappointment, and it really hurt for a long time,” Belew — who learned via email that he wouldn’t be included in the new Crimson incarnation — told UCR earlier this year while touring to promote his latest solo album, Elevator.

Belew was also interviewed for In the Court of the Crimson King: King Crimson at 50, where he made some disparaging remarks about the group and what he felt was a lack of new material in recent years. During a post-screening Q&A session for the film, which was livestreamed globally on Oct. 22, an audience member asked Fripp to respond.

“Adrian is on the record as saying, ‘I’ve not heard a note of this King Crimson,'” said Fripp, who recently did a speaking tour of small venues in North America with David Singleton, his partner at the Discipline Global Mobile record label. Singleton also moderated the discussion on Saturday, which was attended by recent King Crimson members Jakszyk, Harrison and Mel Collins, as well as former members Jamie Muir and David Cross. “I invited [Belew] to the Nashville show at the Ryman in 2021, and he declined to come,” Fripp explained. “I think had Adrian done so, then some of the difficulties he might have had with the personnel of this band … might have changed.”

Fripp also revealed that he’d had Belew in mind for the most recent incarnation of King Crimson, which he said was fueled by a desire to recreate both parts of 1973’s “Larks’ Tongues in Aspic” onstage again. “One drummer was not sufficient, so two were necessary, and in time that proved to not be sufficient either, so we had to add a third,” Fripp explained.

“In 2007 in Nashville. … I asked Adrian if he’d be interested in [playing in a lineup with] triple drumming and he said no. So it had to wait a little while longer.” Fripp and Belew mended fences over a phone call in late summer 2017, and Fripp dubbed Belew the “ninth member inactive” of King Crimson.

Belew found some silver lining in the exclusion — “I think it was a godsend; ‘Well, now this frees me up to be Adrian Belew,'” he said — and he now regrets participating in the documentary.

“I saw the four minutes that I’m supposedly in. That was enough for me,” he said. “I didn’t really enjoy the choices made. I gave them two days’ worth of time and they chose, I guess, four comments that were all negative, so I don’t want to see it. I’m not trying to be negative, but when I was told about it, it was insisted I have to be in it because it was about the history of King Crimson. Well, of course, I wouldn’t think about not being there. But it turned out it was really about the last two years of the band, which I wasn’t part of and have never heard or seen, so I really shouldn’t be in in the film, to be honest. I didn’t have anything to say about that. And I didn’t really want to come off the way I was portrayed, but I guess the filmmaker thought he needed that.”

During the weekend Q&A, meanwhile, Fripp suggested that because of their improvisational and spontaneous nature, King Crimson creates new music every time they perform.

“When I walk onstage, it’s for the first time I’ve ever been here before,” Fripp explained. “I will never be here again. Will I be here now in this moment? For you, members of the audience listening to this music, [do] you listen to the notes you’ve heard before, or are you engaging and listening to it for the first time? If so, this is new music. It’s being invented spontaneously in the moment, even if the form appears to be set. And within the King Crimson set forms, there is always flexibility and malleability and interpretation and making real in the moment. And if this is not so, it has no interest for me.”

Elsewhere during the session, Fripp gave further credence to King Crimson being at an endpoint, referring to the seven-member lineup that toured North America and Japan last year as “the final incarnation” of the band. Asked if there could ever be a lineup that did not include him, the guitarist responded with a firm, “No! Why? Because I see the whole. I see the music. I see the musicians. I see the audience and I see the music industry… and you have to engage with all of that to have the overview. So that’s the quick answer.”

Written and directed by Toby Amies, In the Court of the Crimson King: 50 Years of King Crimson debuted to critical acclaim at South By Southwest in March. It will be released on Blu-ray and DVD on Nov. 11 and is available to preorder now. A limited-edition eight-disc box set containing two Blu-rays, two DVDs and four CDs will arrive on Dec. 2.