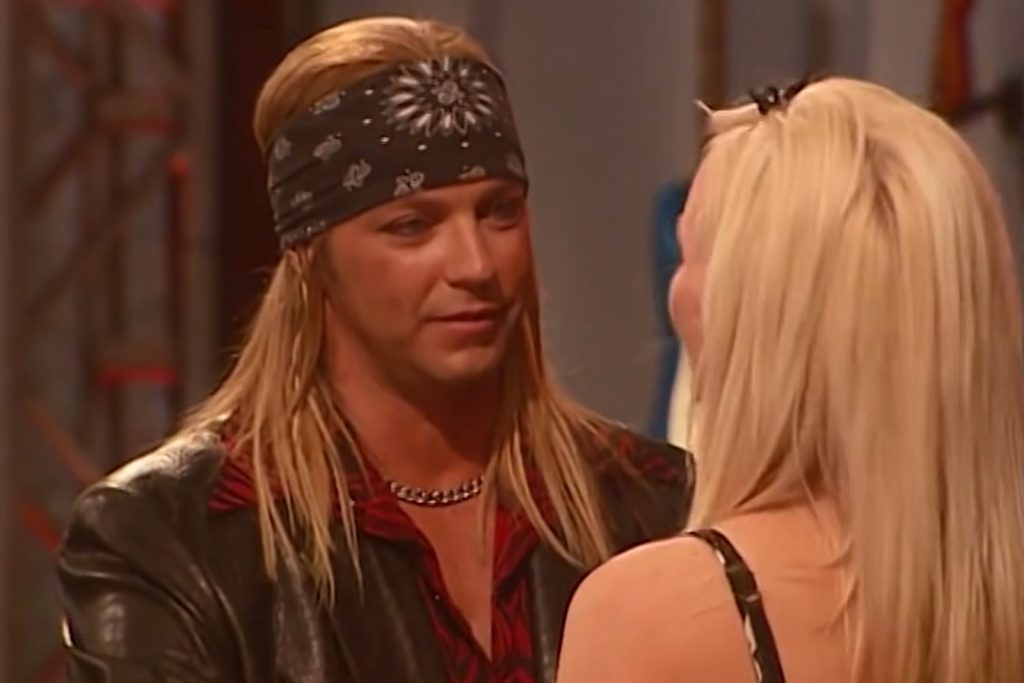 One of glam metal’s biggest frontmen enjoyed a career resurgence via reality TV when Rock of Love With Bret Michaels premiered on July 15, 2007.

As the leader of Poison, Michaels had already enjoyed massive success. Between 1986 and 1993, the band sold more than 15 million albums in the U.S. alone, with Look What the Cat Dragged In (1986), Open Up and Say… Ahh! (1988) and Flesh & Blood (1990) all reaching multi-platinum status. However, by the mid-’90s, things had slowed for the band, and though Poison’s Greatest Hits compilation was a commercial success in ‘96, change was most definitely in the air. By the dawn of the millennium, Michaels was dabbling in acting and solo work, and eyeing the second phase of his career.

In 2006, VH1 scored a hit with Flavor of Love, a reality TV dating series starring Flavor Flav of the rap group Public Enemy. Producers wanted to create something similar with a rock slant and approached Michaels to be their leading man. Initially, the singer was hesitant.

“The first time [the show idea] came around, they wanted to throw it back to the early days, the early look,” Michaels explained to Yahoo Entertainment, alluding to a concept that would have recreated some of the ‘80s hair metal lifestyle. “And I said, ‘Here’s the deal. I can’t do that… I’m gonna have to walk away from this because it has the shelf-life of one episode.”

Instead, Michaels proposed something more reflective of his life at that time. “If you live here and now in the world I’m living in and you take all the bus parties I’ve done, the great backstage parties, all these things that go on, we will make this fun,” the rocker explained.

The show’s creative team agreed, and Michaels — who became one of the series’ producers — signed on. The Poison frontman was adamant the show be “organic and real.” To that end, he insisted that lines not be written for him to say on camera. “Please don’t script me, cuz I’ll suck,” the singer remembered saying. “Just let me talk.”

The central focus of Rock of Love‘s debut episode was a wild welcome party that set the tone for the show’s fun-filled ways. “That first night went on for literally, I’m not making this up, that went on for almost three nights,” Michaels recalled. “The first night became the second night, it rolled into the next day.”

“Those girls, they were stars,” the rocker attested. “Even though I got to be the guy looking for love and hosting it, the girls made that show amazing.”

Rock of Love’s first episode drew an estimated 1.6 million viewers, a solid number in line with other reality shows on VH1 at the time. Meanwhile, critics skewered the series, with the New York Times calling it “carnival sludge: a nauseating paste of fried dough, cigarette ash, salt and grain alcohol.” Fans didn’t care. The reality show quickly became a pop culture phenomenon, even getting parodied on Saturday Night Live. By the end of season one, Rock of Love was drawing more than 5 million viewers, becoming one of the network’s most popular shows in the process.

Rock of Love not only returned Michaels to the limelight, it introduced him to a new generation of fans who were unfamiliar with Poison’s early years. Looking back, the rocker admitted he had a hunch the show would be a hit after that first night of partying.

Watch the Debut Episode of ‘Rock of Love With Bret Michaels’