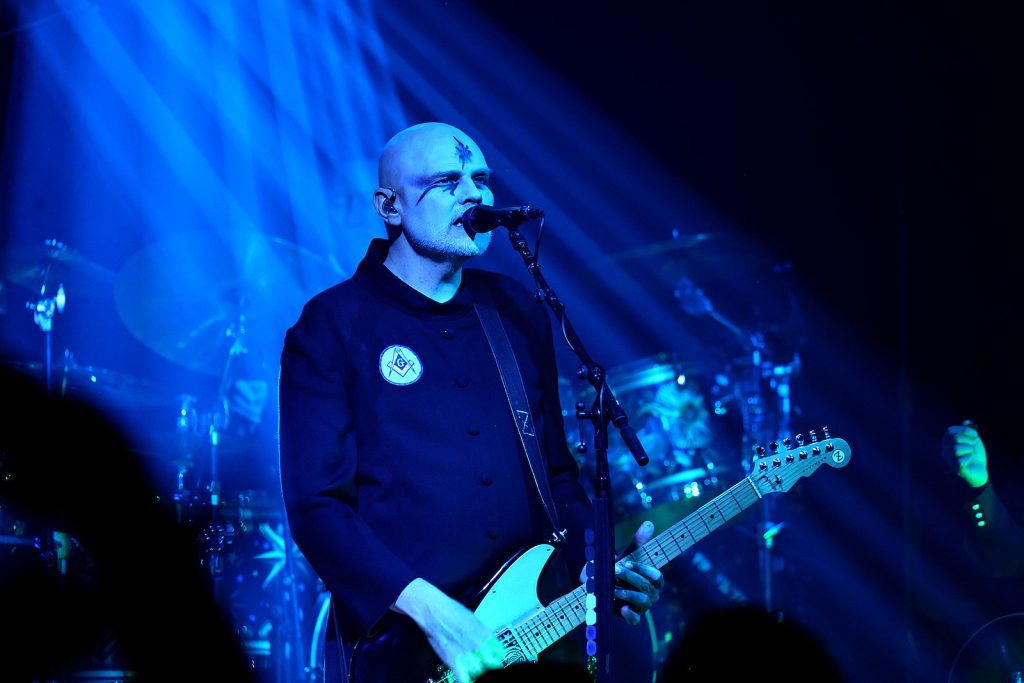 No small feat following up Jane’s Addiction‘s ferocious set at Sunday night’s Spirits on Fire Tour kickoff, but the Smashing Pumpkins rose to the occasion with a dynamic headlining performance that blended massive hits, old-school deep cuts and a sprinkling of brand-new, unreleased songs.

The Billy Corgan-fronted outfit opened its hour-and-50-minute set with “Empires,” a recently released song from the upcoming three-part rock opera ATUM. The 33-track set will serve as a sequel to the band’s chart-topping 1995 double album Mellon Collie and the Infinite Sadness, as well as 2000’s Machina/Machines of God. Mellon Collie was the most-represented album in the Smashing Pumpkins’ oeuvre on Sunday, accounting for six of the evening’s 22 songs.

The group dished out the aggressive, anthemic “Bullet With Butterfly Wings” and “Zero,” treated the audience to an acoustic version of “Tonight, Tonight” and summoned the biggest singalong of the night with “1979.” They ended the set with a brutal, knuckle-dragging rendition of “X.Y.U.,” contrasting nicely with the delicate Machina II cut “If There Is a God” that preceded it.

Other requisite hits and set-list mainstays — Siamese Dream smashes “Cherub Rock” and “Disarm,” Adore‘s “Ava Adore” — made their appearances, but overall, the Smashing Pumpkins’ tour kickoff was hardly the warm, fuzzy nostalgia trip that some audience members had hoped it would be. Along with the darkly seductive ATUM track “Beguiled,” the band debuted two new songs from the upcoming album. The first, “Neophyte,” was a melancholy, synth-inflected number whose “It ain’t right” refrain was emphasized by the words broadcasted on the screen behind the band. The second, “Harmageddon,” was a riff-heavy thrasher that bore a passing resemblance to the obliterative Siamese Dream track “Silverfuck,” which also appeared late in the set.

Corgan and the band seemed most engaged when they indulged that heavy side, including a doomy, larynx-shredding rendition of Talking Heads‘ “Once in a Lifetime” that became an early set highlight. They also excited hardcore fans by dusting off Mellon Collie‘s “We Only Come Out at Night” and Machina‘s “I of the Mourning,” which they hadn’t played since 2008 and 2013, respectively.

Not everybody was receptive to the curveballs, though: It was easy to telegraph when fans would take their seats or make a run for the bar and bathroom as the band broke into newer or lesser-known material. No arena act is immune to this kind of apathy, and the Smashing Pumpkins have never been afraid to defy audience expectations, even at the expense of their popularity. And besides, the newer songs still had their perks, like a gobsmacking drum solo from Jimmy Chamberlin in the middle of 2018’s “Solara.”

If the Smashing Pumpkins’ tour kickoff eschewed the instant gratification of a pure greatest-hits set, it also offered a defiant, often virtuosic display of dynamics from a band that still feels like it has something to prove — and isn’t that all we want from our rock stars anyway?

Everything is cyclical is Billy Corgan’s world, no entryway ever fully shut. As a wise man once sang, “The End Is the Beginning Is the End.”