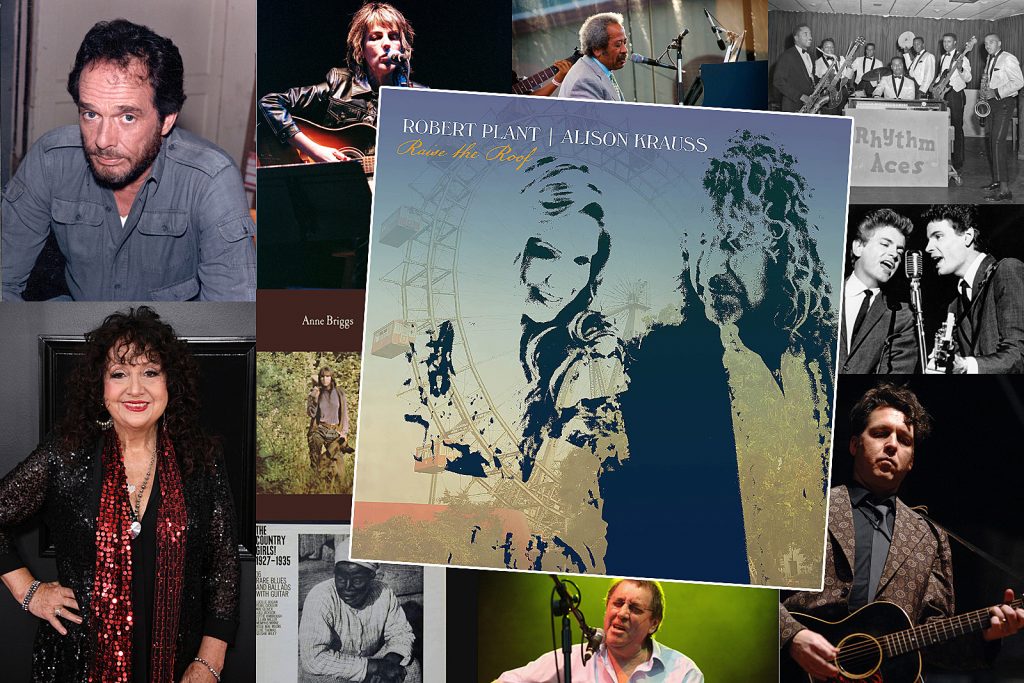 Plant’s history with one particularly famous British rock band in the ’70s and Krauss’ humble upraising during the bluegrass revival of the ’90s would appear to be at odds with one another. But when the duo joined forces in 2007 for a T Bone Burnett-produced album of covers, Raising Sand, suddenly it was clear: Plant and Krauss’ voices, even with one 20 years older than the other, melded beautifully.

The LP was a monumental success, winning all five Grammys it was nominated for, including Album of the Year. “Sometimes I want to pinch myself and say, ‘Am I really in the middle of this?’ ” Plant said at the time. “There is such a great cacophony of sounds and style. I couldn’t wish for anything better than this.”

Fourteen years later, they aim to do it all again: Raise the Roof, once again produced by T Bone Burnett, will be released on Nov. 19. And once again they’ve selected a range of covers from early folk songs to newer rock tracks, lending their gorgeous harmonies to each. We take a look at the Songs Robert Plant and Alison Krauss Cover on Raise the Roof below.

When Krauss first heard “Quattro (World Drifts In),” it was “the moment I knew we’d make another album.” Taken from the 2003 album Feast of Wire by American indie-rock band Calexico, the song seemed a perfect match — even Joey Burns’ vocals sound similar to Plant’s tone and style.

This isn’t the first time “The Price of Love,” a lively tune by the Everly Brothers, has been sung by other rock artists. It was covered by Roxy Music‘s Bryan Ferry for his 1976 solo album Let’s Stick Together, by Poco for 1982’s Cowboys & Englishmen and by Marianne Faithfull for her 2014 LP Give My Love to London. Buddy Miller, one of the musicians who contributed to Raise the Roof, also included a version on his 2002 album, Midnight and Lonesome. Another Everly Brothers song, “Gone Gone Gone (Done Moved On),” appeared on Raising Sand.

Most of the songs on English folk singer Anne Briggs’ sophomore album were traditional tunes — “Go Your Way” was one of two exceptions. Even though she never found much commercial success in the folk scene, Briggs’ influence stretched further than she ever anticipated. She and Bert Jansch, whose music is also covered on Raise the Roof, were close contemporaries, and it was through her that Jansch was introduced to the traditional song “Blackwaterside,” which appears on Anne Briggs. Later, Plant’s Led Zeppelin bandmate Jimmy Page took inspiration from the song and wrote “Black Mountain Side,” which appeared on the band’s 1969 debut album.

Singer Betty Harris had been in the music industry only a few years when she switched record labels to the New Orleans-based Sansu and began working with Allen Toussaint, whose soul arrangements served as the perfect backdrop to Harris’ powerful voice. “Trouble With My Lover” appeared on 1969’s Soul Perfection, a compilation album t released only in the U.K. Plant and Krauss also included a Toussaint song on Raising Sand: “Fortune Teller.”

Written by saxophonist and Rhythm Aces bandleader Robert “Bobby” Moore, “Searching for My Love” reached No. 27 on the U.S. Billboard Hot 100 chart in 1966. When the single was released, many who had never seen the group perform live assumed it was Moore singing based on the band’s name. But that’s guitarist Chico Jenkins handling the lead vocals here.

Originally written by Randy Weeks, “Can’t Let Go” appeared on Lucinda Williams’ 1998 album Car Wheels on a Gravel Road. The song would earn her a Grammy nomination for Best Female Rock Vocal Performance. “I was playing [album producer] Steve Earle‘s dobro,” Williams once said of making the track, “which had a really wide neck, and my fingers kinda slipped on it. But the track was so brilliant that everyone went, ‘No, no, it’s great!'”

A leading figure in the British ’60s folk movement, singer-songwriter Bert Jansch has influenced the likes of Paul Simon, Johnny Marr, Elton John, Donovan, Neil Young and Plant. The singer has even performed at Jansch tribute shows in 2013 and 2016, noting that he owes “enormous and long-standing” musical debt to the folk legend.

Ola Belle Reed, the fourth of 13 children to be born into a large family in rural North Carolina in 1916, was a pioneer in bluegrass music. She learned to play the banjo clawhammer style as a teenager and sang songs with her family about Appalachian life and traditions passed down through generations. She performed with multiple folk ensembles in the ’30s and ’40s, while her songs have been recorded by many mainstream bluegrass and country artists, including Tim O’Brien and Marty Stuart.

The exact details of Geeshie Wiley’s background are unclear — even her official name has been subject to multiple conjectures. Wiley recorded only six songs across three singles in April 1930, singing and accompanying herself on guitar. Her wistful, emotional performances are considered some of the best examples of early southern blues music, all the more noteworthy because she was a female guitarist.

Details have yet to emerge on the inspiration and story behind the only non-cover on Raise the Roof, which is penned by Plant ant Burnett. But by now the pair is at ease bouncing ideas back and forth. “I always set up the studio as if it is a living room, ” Burnett once said. “Having a comfortable environment, instead of a sterile environment,  where it’s all about recording. It’s more like, ‘Okay, we’re here now. Let’s be comfortable.'” Raising Sand included another Plant cowrite: “Please Read the Letter,” a song originally recorded by Plant and Page for their 1998 album, Walking Into Clarksdale.

“Going Where the Lonely Go,” the lead single and title track from Merle Haggard’s 35th album, became another hit country song for the late legend when it was released in 1982. Cowritten with Dean Holloway, the song features Haggard’s longtime backing band the Strangers. Krauss once guested on another Haggard album, 2007’s The Bluegrass Sessions, duetting on “Mama’s Hungry Eyes.”

12. “Somebody Was Watching Over Me”
Artist: Written by Brenda Burns, recorded by Maria Muldaur
Album: Fanning the Flames (1996)

A member of the vibrant Greenwich Village folk scene in the ’60s, singer Maria Muldaur’s style strayed from the genre (she had a Top 10 hit in 1973 with “Midnight at the Oasis”). Fanning the Flames, on which “Somebody Was Watching Over Me” appears, also includes guests from a range of backgrounds, including Huey Lewis, Mavis Staples and Bonnie Raitt.